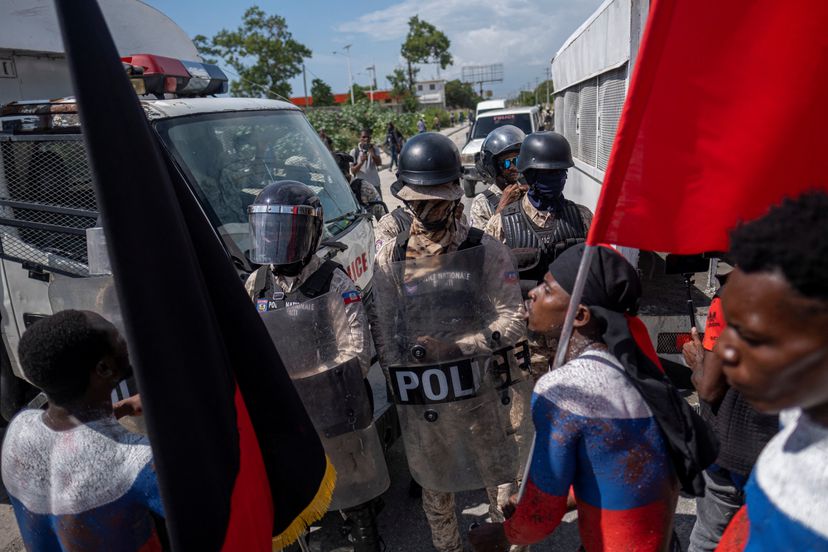 Demonstrators argue with police during a protest in Port-au-Prince. File Photo.

In Haiti, the call for revolution is growing louder and louder as hundreds of thousands pour into the streets to end the criminal, U.S.-installed government of Ariel Henry and demand “U.S. Out of Haiti!” Protesters have barricaded roads in response to price hikes dictated by the International Monetary Fund (IMF), making fuel impossibly expensive for most of the population. Workers have carried out massive strikes in garment factories from which U.S. corporations amass millions in profits while suppressing wages to $7.50/day.

“Wall Street” gangs bleed Haitian people for profits
Desperate to shore up the neocolonial government of their puppet Henry, the U.S. and Canada have delivered military equipment and advisors. Henry’s military and police—many trained by the U.S.—are brutally repressing and jailing protestors while paramilitary gangs linked to the police terrorize the population. Since even these measures have not succeeded in keeping the Haitian masses down, the U.S. has instructed their puppet Henry to request a U.S./U.N. invasion and occupation of Haiti. Henry’s “request” for troops might as well have come from a boardroom at Citibank, whose investors similarly “requested” the bloody invasion and occupation of Haiti by U.S. Marines in 1915.

Capitalist robbers always depict those fighting them as criminals
On behalf of U.S. millionaires, the Biden administration, dripping with the blood of the oppressed Haitian people, disguises its true aims with the old lie that “gang violence” must be addressed by U.S. intervention. Biden is desperate to conceal the truth that U.S. imperialism is the real cause of Haiti’s humanitarian crisis.

Every struggle of the workers and oppressed brings out the most vile slanders of the super-rich. Those who resist exploitation and oppression are branded as criminals. Striking workers are smeared as “union thugs” causing hardship for ­the people. The same goes for anti-fascist fighters, from the Black Panthers to BLM protestors, from the Suffragettes to anti-war protestors. Whether we’re striking miners or water defenders, we are all criminals in the eyes of the capitalists who consider it theft when workers gain a raise, a labor or civil right, or stop a planet-destroying pipeline. Above all else, their laws, police, and courts protect the private property of the few while criminalizing the just actions of the many.

Our job is to rip fff the masks of imperialism, not to support lies
On October 21, the U.S. pushed sanctions through the U.N. Security Council based on their racist lies about Haitian “gangs.” The U.N. Security Council sanctions against Haitian “gangs” do not target the terror squads of the National Police that work with the U.S. CIA. (After all, the U.S. never sanctioned the Tonton Macoute, the terror squads they used to prop up the US-backed dictatorship of Papa Doc Duvalier.) Instead, the U.S.-pushed sanctions target Jimmy “Barbecue” Cherizier and the FRG9 (Revolutionary Forces of the G9 Family and Allies, Mess with One, You Mess with All), who have mobilized many of the most oppressed masses now openly calling for social revolution. The imperialists behind the sanctions are clearly afraid that the Haitian people are moving to take the future of their country into their own hands. As Cherizier (Barbecue) puts it, referring to Haiti’s national hero and freedom fighter, Jean-Jacques Dessalines:

“If Dessalines were alive today, it would be difficult for him to make the Revolution and liberate this country. As soon as your speech defends the aspirations and the popular demands of the oppressed, imperialism will automatically label you a bandit, a criminal, a terrorist.”

Buying into the criminalization of the Haitian struggle, some “progressives,” even some “leftists,” support sanctions. More concerned with their image and funding, they tout the work of capitalist and CIA-funded NGOs that hold back the people and defend the status quo. These so-called progressives are alarmed when the poorest, the shoeless, and the “uneducated” band together. They are alarmed when armed neighborhood organizations or political parties organize to end the terrorism of the rich, who try to keep people of the slums warring with each other rather than turning their weapons against the oppressor. They condemn mass direct action, and ultimately, they condemn revolution itself. After all, when the Haitian people free themselves from capitalist wage slavery and dictatorship, these NGOs and their well-paid directors will no longer exist.

US Tries to Bend UN Charter to Bless Illegal, Unwanted Invasion of Haiti

U.S. workers’ interest is with Haitian revolution
Every worker should stand on the side of the Haitian people in their struggle for self-determination. We must speak out loudly against the brutal occupation of Haiti and the super-exploitation of our fellow workers by U.S. capitalists, Wall Street, and the IMF.

We are part of a global working class. Our labor, exploited by the same capitalists, is bought and sold on the global capitalist market. If the capitalists can pay $7.50 for a day’s work in Haiti or force incarcerated workers to work for free, the whole working class is worse off. When the capitalists use fascist governments like Ukraine’s to repeal labor laws or when they use their politicians and their media to scapegoat immigrants so they can pay them less, our wages sink lower with theirs. What is imperialism? It is the criminal, global capitalist search to pay the least, steal the most resources, and prevent workers and peasants from rising up to better their lives and determine their own future.

We should say, “Not one penny for U.S. militarism or the occupation of Haiti.” Sanction the oil and food conglomerates for raking in record profits while 345 million people face starvation. Order gas and food prices and insurance costs rolled back. Issue a moratorium on rent hikes and mortgage and credit card interests. Spend money to address the effects of climate change, not to build up the U.S. military, whose purpose is to secure the profits of the banks and corporations torturing the Haitian people.

Let the Haitian workers take back the stolen property of the real gangsters—the U.S., Canadian, and French banks, apparel companies, and mining corporations that have bled them dry. Haitian workers have a rightful claim to that wealth that they alone have created. On the flip side, we must categorically oppose U.N. Security Council sanctions and seizures of property. Sanctions are war against the people. In Iraq alone, sanctions killed over half a million children, a fact proudly admitted by Madeline Albright, the former U.S. ambassador to the U.N.

The U.N. Security Council has authorized the most horrific wars, occupations, and sanctions for capitalist profit, including in Iraq, Afghanistan, and Libya. There is not one shred of legitimacy to their claim of humanitarian concern when they have condemned millions to death and supported the most brutal repression for profit.

The U.S. has not given up on the idea of an invasion of Haiti, whether they try to go through the U.N. Security Council or not. Apart from protecting U.S. profit-making enterprises in the country, they do not want the example of a revolution to spread. The U.S. ruling class has never forgiven the heroic Haitian people for their world historic victory over the slavers of 1804, a victory that inspired many here in the U.S. to fight for the eventual defeat of the American system of chattel slavery. The struggling Haitian people continue to be a beacon for oppressed people worldwide.

Support the Haitian People’s Revolution & Self-Determination
Reject the Racist, Phony Justifications for U.S. Intervention
Victory to the Haitian people’s struggle for self determination!
US and its puppets out of Haiti! No to imperialist invasion, sanctions, and occupation!
Cancel Haiti’s debt, pay reparations for the colonial theft of Haiti’s national wealth!