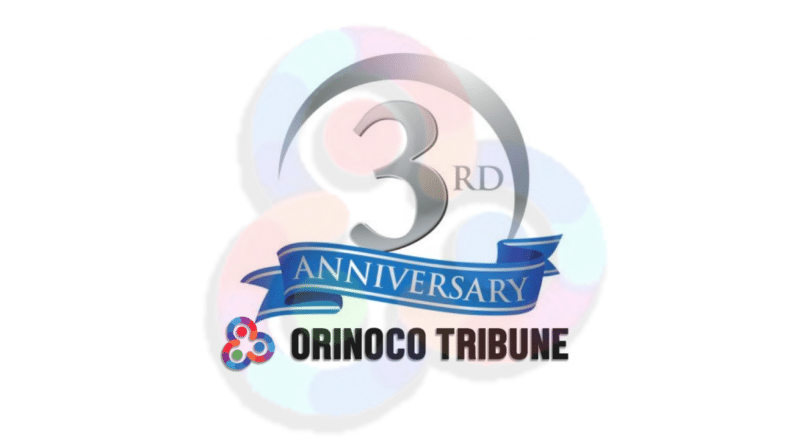 Caracas, November 18, 2021 (OrinocoTribune.com)—Orinoco Tribune, the only English-language, Venezuela-based, independently owned Chavista news outlet produced by Venezuelans, is celebrating its third anniversary this November. For this occasion Orinoco Tribune has organized a series of activities and initiatives aimed at treating our followers and readers, but also highlighting the impact we have had spreading Chavista perspectives beyond the boundaries of Venezuelan territory.

We need your support to remain online, no exaggeration. Links in BIO #OT3YearsOld pic.twitter.com/grt08NDAoB

In the framework of this celebration, Orinoco Tribune has received several videos from journalists, writers, and activists. One way or another, these individuals are connected to Orinoco Tribune’s work in the defense of the Bolivarian Revolution and Chavismo, our promotion of anti-imperialism, and our commitment to exposing the flaws of capitalism, not only in Venezuela but also in Latin America and other parts of the globe.

We need your support to remain online, no exaggeration. Links in BIO #OT3YearsOld pic.twitter.com/nwXfvOdJpH

The plan is to post one of these videos every other day on our social media accounts (Instagram, Twitter and Facebook) until the end of November. We have already started doing it, starting with a video from activist and writer Dan Kovalik posted on November 3.

We need your support to remain online, no exaggeration. Links in BIO #OT3YearsOld pic.twitter.com/hsKNmXyJXV

Since posting Roger Harris’ video on social media platforms, we decided to add a highlight from the comments to each post. However, we did not do that in the case of Dan Kovalik, Cheryl LaBash, María Páez Victor, and Nino Pagliccia. For this reason, we have decided to put our favorite comments from each below:

We need your support to remain online, no exaggeration. Links in BIO #OT3YearsOld pic.twitter.com/bOfHU4UCnd

1- Dan Kovalik: “The best, most objective news on Venezuela, on Latin America, and really on the world.”

2- Cheryl LaBash: “In these three years you have built a powerful voice in the media war for truth over imperialist lies.”

3- Maria Páez Victor: “In the midst of these dangerous times for democracy, Orinoco Tribune has made a titanic effort to prove that honesty, diligence, and principles are still alive.”

4- Nino Pagliccia:  “Orinoco Tribune is my go-to medium for reliable and timely information about Venezuela, Latin America, and the world.”

This is an amazing group of people based in Canada and the United States, who are committed to the same causes that Orinoco Tribune fights for, people we admire for their constant, consistent, enduring and excellent work. But the list goes on.

We are very humbled to receive the support of Roger D. Harris and Task Force on the Americas @TaskAmericas

“There is no better publication than the Orinoco Tribune for implementing our mission of … #OT3YearsOld pic.twitter.com/9kFHaGr9rG

“Since its origin three years ago, Orinoco Tribune has been providing the best coverage in English on Venezuela.”

“As someone who is often researching Venezuela, for different projects and articles that … #OT3YearsOld pic.twitter.com/9zuPdeKFhb

“I just checked my gmail and in the last two years, friends of mine have sent no less than 270 articles to me from The Orinoco Tribune.”#OT3YearsOld pic.twitter.com/jU9FmrYJGJ

As a bonus for our readers that do not do much social media surfing, we have placed below those videos that we already have in queue for social media posting in the coming days. We are sure we will have a few more before the end of the month. Below each video we present the comments we highlighted from each of our compas’ words:

Ollie Vargas:
“Orinoco Tribune is such an important project—bringing news from Venezuela to the English-speaking world.”

“Orinoco Tribune, like Kawsachun News, does not have any big corporate sponsors or NED funding, or foundations sending large checks.”

Aidan Jonah:
“I want to give real thanks to Jesús Rodriguez-Espinoza and the rest of the terrific folks at Orinoco Tribune.”

Diego Sequera:
“Orinoco Tribune is a necessary organization, not only because of their own content creation, but because of their major concern in translating. They set up a bridge between the language gaps that are of an essence, in this moment.”

Alan MacLeod:
“The Orinoco Tribune is barely three years old and is already an indispensable English-language news source for anyone interested in Latin America and beyond.”

Arnold August:
“It is not an accident that it is becoming one of the most important English websites in the whole region. Please fully support Jesús and The Orinoco Tribune—you cannot go wrong.”

Orinoco Tribune is humbled by the support. As the editor and founder, Jesús Rodríguez Espinoza, I express my thanks and gratitude on behalf of Orinoco Tribune and our contributors and volunteer staff including Steve Lalla from Canada, Saheli Chowdhury form India, Gabriel Martínez Saldívar from Mexico, and Kahlil Wall-Johnson from Spain. Without this amazing team we wouldn’t be where we are now. We also must mention Elizabeth Ferrari and Owen Hughes, who are not with us anymore, but we know they follow us in spirit.

We took this initiative as an effort to measure our level of support and to see how people we admire view us. However, we also did so as part of an effort to raise awareness about our need for financial support from anyone capable of doing so, regardless of where they may reside.

Orinoco Tribune initiated our annual fundraising campaign last May, and by this time of the year we would hope to have raised about 58% of our annual goal. However, we are only at 10%, meaning that we are starting to consider that we may be forced to abandon the project to try to find another source of revenue.

Orinoco Tribune counts on you to stay online, and we are very thankful for all the people who have contributed one way or the other to put us where we are. We are also aware the complexity of the pandemic’s economic crisis affecting millions of people. But it is impossible for us to compete against media projects, local or foreign, with just a tiny fraction of the budget allocated by imperialist governments and NGOs to smear Venezuela, Chavismo, and any other socialist and anti-imperialist country worldwide.

We need your support. If you cannot help us financially, we are always in need of volunteers, and we will adjust to your time constraints. In most cases, new volunteers’ contributions to Orinoco Tribune might not require more than two to four hours of their time each week. If you cannot volunteer, we encourage you to share our work by any means available to you, and if possible, to encourage others to donate.

You can always find our donation links in the left sidebar on a desktop interface, or in the menu after a news or opinion piece if you are reading on your phone or tablet. We really need your support, because as an independent news service we do not receive funding from any governments or public agencies (local or foreign), nor from any NGOs (local or foreign), and we have also decided (for many different reasons) not to run ads to secure additional income.

Thus, Orinoco Tribune relies only and exclusively on your donations, which unfortunately lose value each day due to the inflation caused by the US and European blockade and sanctions against Venezuela. As an example, last year the average family of three in Venezuela spent approximately $300 on groceries, whereas this year about $500 are needed to buy the same amount of food.