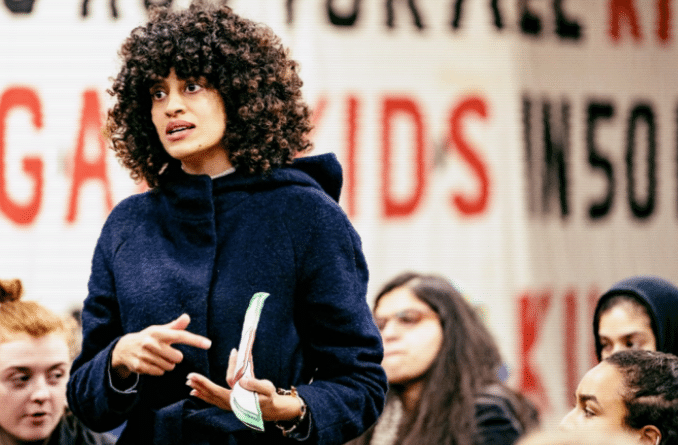 Shahd Abusalama, a Palestinian activist, writer and artist from Gaza, announced on her social media that she was suspended from a teaching position at her department following an intense online campaign by pro-Israel supporters who accused her of ‘antisemitism’.

I cannot describe what I feel in words, receiving this proactive support and solidarity from people I know or from believers in the rights of Palestinians and their just cause.

✉️If you want to reach me easily, email me/us at insolidaritywithshahd@gmail.com#InSupportofShahd

Abusalama, who moved to the UK from the besieged Gaza Strip in 2014, following a deadly Israeli war on the Strip, is an active Palestinian rights campaigner and was already targeted by Israeli lobby groups and publications in the past.

I'm currently recording my presentation on Resisting the Witchhunt so I can't join this evening's Twitter Storm at 7pm 4 @ShahdAbusalama so pls can I ask as many friends & comrades 2 support this incredible Palestinian women, the latest victim of the Lobby!#InSupportOfShahd pic.twitter.com/cyjvUJOA7l

The Electronic Intifada reported that the last wave of cyberbullying against Abusalama began in December, “when Jewish News and the Israel lobby group Campaign Against Antisemitism accused her of fostering hostility towards Jews.”

Abusalama’s story is reminiscent of what happened last year to David Miller, a professor at Bristol University. Miller was fired from his job despite the fact that he was cleared of all accusations following two independent investigations commissioned by his university.

After #Corbyn, #Israel Lobby Turns Its Guns on #UK Academia | by @Jonathan_K_Cook https://t.co/A5oyVUpCII via @PalestineChron

“The Israel lobby appears to be readying for a campaign to root out left-wing academics in the UK critical of Israel’s continuing oppression of the Palestinian people – echoing its efforts against the previous leader of Britain’s Labour party, Jeremy Corbyn,” British journalist Jonathan Cook wrote in a recent article.

“With their new war on academia – assisted by a right-wing government – they may be able to inflict as much damage on academic support for Palestinians as they did political support,” Cook wrote.