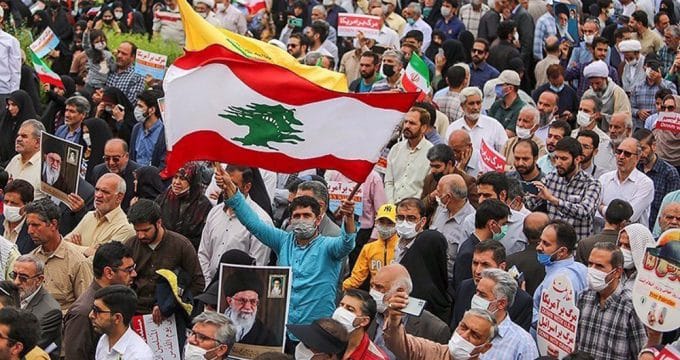 Millions of people have taken to the streets for Quds Day rallies around the world to show solidarity with the Palestinians and condemn Israeli atrocities against them.

In Iran, demonstrations started at 10 a.m. local time (0530 GMT) in Tehran and some 900 others cities and towns across the country.

People taking part in the rallies seek to communicate to the world the deplorable conditions inflicted by Israel upon the Palestinians and press the Israeli regime to respect their rights.

They are also using the opportunity to highlight Israel’s decades-long occupation of Palestine and the regime’s atrocities against the Palestinians.

“The Zionist regime was created under international conspiracies. God willing, we will see the eradication of Israel off the face of the Earth,” Salami said on Friday as he addressed people attending the International Quds Day rallies in the Iranian capital city of Tehran.

He described the creation of the Tel Aviv regime as a non-healing wound and a dagger in the back of all Muslims, stressing that Palestinians have realized that the so-called Abraham Accords and similar normalization agreements will neither bring them security nor peace.

“The enemy only understands the language of force. The roadmap for Iran is to become stronger as it is the way to emerge victorious.”

“The Zionist regime has not won a war against Palestinians in recent years. Zionists have reached a point, where inflicting injuries on a Palestinian will bring them repercussions,” the IRGC chief said.

He went on to note that Israeli officials have come to realize that Washington is not a reliable partner to rely on,

“We are men of our words. Our response will be painful for the Zionist regime,” Salami said, warning Israel that its vicious acts will bring about severe consequences.

Final statement calls for ‘beefing up anti-Israel resistance’
At the end of the rallies, a statement was issued that described the liberation of the holy city of Quds, freedom of the oppressed and defenseless Palestinian nation from the clutches of the occupying Zionist regime, and annihilation of the Israel regime as the lofty ideals of the Muslim world.

It denounced concessions and normalization of diplomatic relations with the usurping Tel Aviv regime as an act of unforgivable treason and a fiendish plot aimed at weakening the anti-Israel resistance front and liquidation of the Palestinian cause.

“We condemn any attempt, which would seek to deviate the public opinion of the Muslim world away from the evil scheme,” the statement read.

It also referred to the International Quds Day and support of Palestinians as the guarantor of Iran’s national security and the key to the unity of the Muslim Ummah against the conspiracies of colonial and arrogant powers.

The statement went on to stress the need for beefing up the anti-Israel resistance front, calling on regional and international organizations to adopt decisive and practical positions, back the sole solution to the Palestinian issue, which is based on the return of Palestinian refugees and a comprehensive and free referendum, and oppose any alternative, oppressive and sham initiative in its place.

It noted that the successive defeats of the United States, the Israeli regime, and Saudi Arabia in the strategic West Asia region have dispelled the invincibility myth of the Israeli army and the regime’s security apparatus and indicated that colonialism and Zionism are in decline in the region.

“We emphasize that the Islamic Republic of Iran Armed Forces firmly, completely, and effectively support the anti-Israel resistance front, especially the zealous and courageous Palestinian fighters,” the statement pointed out.

The statement also decried the deadly silence of the international community and human rights organizations vis-à-vis the racist practices, genocide, and inhumane crimes of the bogus Israeli regime.

It highlighted that the Tel Aviv regime has perpetrated evil crimes against various nations, especially Palestinians, and has been involved in criminal acts against the Iranian people and the assassination of the Islamic Republic’s nuclear scientists.

“We demand responsible and relevant institutions as well as members of the press to use existing capacities and opportunities to expound on Israel’s long list of crimes, and to explain to the young generation the reasons behind Iran’s support for the Intifada (Palestinian uprising) and the Palestinian issue,” the statement read.

Over the past two years, Iran had replaced street rallies with online events to commemorate the International Quds Day as a deadly coronavirus pandemic had restricted mass gatherings across the globe.

Every year on the last Friday of the holy month of Ramadan, worldwide rallies are held to commemorate the Palestinian people’s resistance against Israel and their struggle to liberate their territories, which have been occupied by Israel for decades.

The annual event is seen as an opportunity for freedom-seeking people across the world, regardless of faith, to voice their support for the Palestinian cause and vent their anger against the apartheid regime in Tel Aviv, which has occupied Palestinian territories since 1967.

The International Quds Day is among the legacies of the late founder of the Islamic Republic of Iran, Imam Khomeini, who is revered as a spiritual leader by Muslims across the world. Back in 1979, shortly after leading an Islamic Revolution which toppled the US-backed Shah of Iran, Ayatollah Khomeini named the last Friday of the fasting month of Ramadan the Quds Day.

Meanwhile, Israeli forces have continued their attacks against Palestinian worshipers at the al-Aqsa Mosque compound in the Old City of occupied al-Quds.

The troops fired rubber bullets and tear gas to disperse the crowd.

At least three people were injured as a result, according to the Palestine Red Crescent Society.

Tensions have remained high in the occupied Palestinian territories over the past several weeks. The situation is particularly tense in al-Quds, where the al-Aqsa Mosque compound is located.

Israeli troops have on various occasions attacked Palestinian worshipers there, as they gathered for prayers during the holy month of Ramadan.

The desecration of the mosque has drawn widespread condemnation, with Palestinian resistance groups promising a firm response.

Bahrainis held rallies in the villages of Abu Saiba, Sanabis, and Samaheej as well as Bilad al-Qadeem suburb of the capital Manama to voice strong protest against Manama’s concession to Israel and the opening of Tel Aviv’s embassy in the Persian Gulf country.

They held up the portraits of the country’s most prominent Shia cleric Sheikh Isa Qassem and voiced strong support for Palestinians.

Iraqis rally to mark Intl. Quds Day
Elsewhere in the southern Iraqi port city of Basra, hundreds of people took to the streets to mark the International Quds Day.

Rally held in Syrian capital in solidarity with Palestine
Moreover, hundreds of people staged a mass rally in the Syrian capital city of Damascus to express their solid support of Palestinians in the face of the Israeli acts of aggression.

The participants, carrying national Syrian and Palestinian flags and those of Palestinian factions, marched from the al-Hamidiyah Souk, the main Damascus shopping center, towards the Umayyad Mosque, which is also known as the Great Mosque of Damascus.

They chanted slogans in condemnation of Israeli forces’ assaults against Palestinian worshipers at the al-Aqsa Mosque compound and demanded the full restoration of the legitimate rights of Palestinians.

The marchers also underlined that the final victory over the Zionist enemy and the liberation of occupied Arab lands will definitely take place.