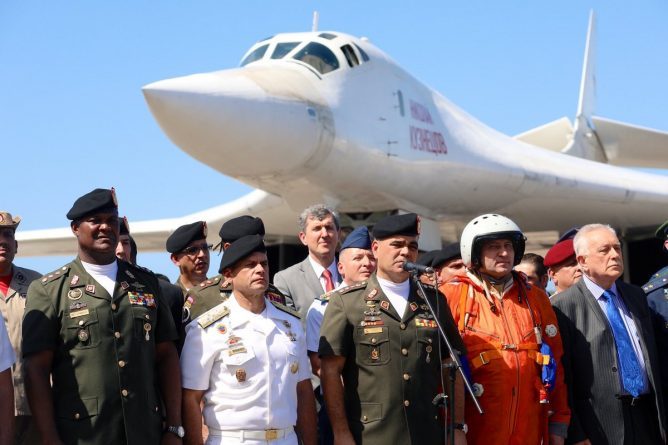 Two Tu-160 strategic bombers, an An-124 transport aircraft and a long-range aircraft IL-62 have flown from Russia to the Maiquetía International Airport in Venezuela. The Department of Information and Communications of the Ministry of Defense of Russia reported in a statement. Russian aircraft overflew the waters of the Atlantic Ocean, as well as the Barents seas, Norway and the Caribbean.

The pilots covered more than 10,000 kilometers during the flight, which was carried out “in strict accordance with the regulations for the use of international airspace” , says the statement. The Tupolev Tu-160, nicknamed as “White Swan”, is a heavy supersonic bomber of variable geometry developed by Túpolev in the Soviet Union. It was the last Soviet strategic bomber design, being the heaviest fighter plane and the largest supersonic airplane built in the world. He entered service in 1987 and remains active in the Russian Air Force with a total of 16 units. The Russians call it “White Swan” because of its color and soft lines. It has the potential to be used until the year 2040. An Antonov AN-124 plane, also known as the fourth largest aircraft currently operating, capable of carrying up to 150 tons of cargo landed in Maiquetía; It can also carry up to 88 passengers on an upper deck behind the cabin. It also landed an Ilyushin IL-62 aircraft, a four-reactor that went into service at the Soviet company Aeroflot in March 1967. On December 6, the Russian Minister of Defense, Sergei Shoigú, expressed his hope that the Russian Navy ships and Russian military aircraft could enter the ports and continue landing at the Venezuelan airfields, respectively, to receive maintenance services.

During his meeting with his Venezuelan counterpart, Vladimir Padrino López, Shoigú stressed that the cooperation between Moscow and Caracas “is going quite well”, due to the “regular exchange of specialists and delegations” and “to good work in the field of education”, in other aspects.

The Russian minister noted that, thanks to this collaboration that “benefits both Venezuela and Russia,” the Russian military “get significant experience” with these long-haul flights and have the opportunity to “keep their combat equipment in good condition.”