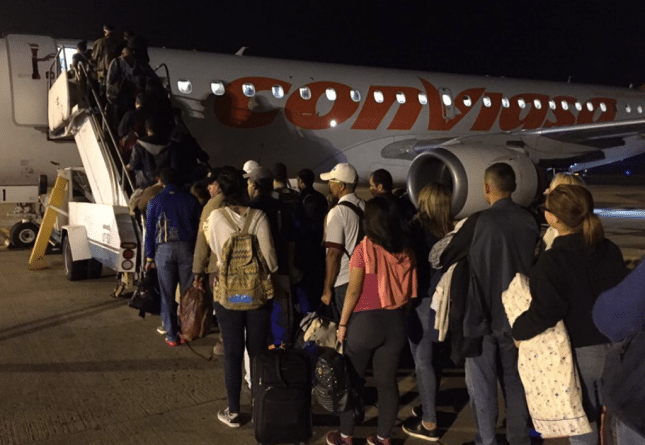 A group of 85 Venezuelans returns Monday to Venezuela from Argentina, through the Plan Vuelta a la Patria. The information was released by the Venezuelan embassy in Argentina through Twitter. The returnees come back home on a third Conviasa flight from Buenos Aires, according to information from the diplomatic mission.

“The third flight of the “Plan Vuelta a la Patria” takes off from the Argentine Republic, where 85 Venezuelans join the social program promoted by President Nicolás Maduro to return to their homeland “, is the message that the embassy divulged with attached photos of the moment in which the fellow Venezuelans take the flight. Before a campaign of xenophobia and discrimination against Venezuelans, in April of this year President Maduro proposed designing the plan with the purpose of providing support to Venezuelans who migrated for various reasons and who, faced with an adverse reality in those nations, wanted to return to Venezuela with the objective of studying, working for peace and the socio-economic prosperity of the nation. Through this plan have returned to the country more than 10,000 Venezuelans, who have expressed their free will to return in order to resume their life in Venezuela.

The plan includes several phases starting with the reception of the application and due process by the competent authorities, such as registration in the program, then the logistical operation, the transfer to Venezuela and the subsequent insertion in the social protection system designed by the Bolivarian Government.