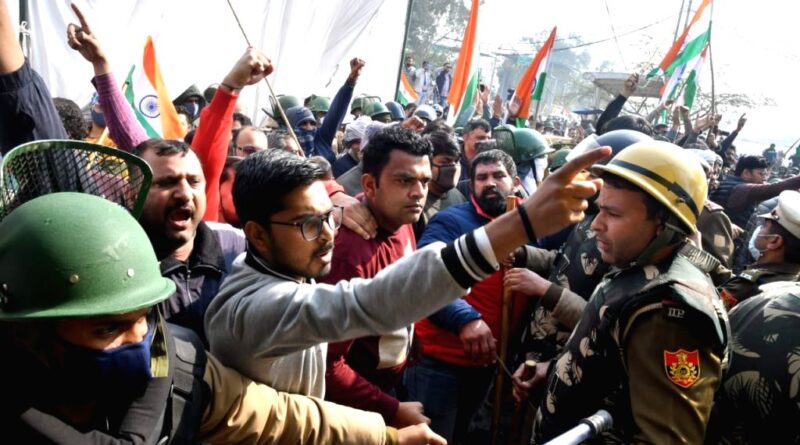 Kolkata, Jan 30, 2021 (OrinocoTribune.com) – This Thursday and Friday, farmers and farm workers camping at different sites around Delhi in protest against the three new farm laws in India were threatened by police and paramilitary and attacked by forces allied to the ruling coalition of the central government. The attacks happened at two different sites outside Delhi; however, in both cases, the protesters resisted, and the demonstrations are continuing.

Ghazipur
On Thursday morning, Uttar Pradesh police started making arrangements to evict protesters from the site at Ghazipur on the Delhi-Uttar Pradesh border, where farmers from Punjab, Haryana, Uttar Pradesh (UP) and other states around Delhi have been staging a sit-in for over two months. The eviction notice was issued on Thursday by Ghaziabad Additional District Magistrate Shailendra Kumar Singh, citing “violence” of a few groups of farmers that broke away from the designated route during the tractor rally in the national capital on Republic Day and went into the Red Fort where they put up the Nisan Sahib [Sikh religious flag]. Following the Republic Day incident, 22 cases were registered, and 37 leaders from various organisations were booked under serious charges including rioting, attempted murder, and sedition.

On Thursday, close to a thousand security personnel arrived at the Ghazipur site; police removed tents and makeshift sheds; and water and electricity supplies were cut off. Rakesh Tikait of Bharatiya Kisan Union (BKU), leader of the protest site and one of those named in the cases, refused to call off the sit-in and surrender to the police. At a press conference in the evening, Tikait said with tears in his eyes, “we wanted to court arrest peacefully as the law of the land is supreme and I am not scared of going to jail… But armed goons led by two BJP [Bharatiya Janata Party] MLAs came here in collusion with the police and started beating the farmers here and creating a turmoil. It seems there is a plan to stir up violence when the protesters return. If there is any such plan, I will remain here. I will face bullets but not leave this place.”

As this speech went viral on social media, a protest meeting was held in Tikait’s hometown of Muzaffarnagar, UP, and people in the thousands, including women and children, left for Ghazipur in tractors and trucks from towns and villages of UP and neighboring states. As they started reaching the protest site and the crowd swelled, the police desisted from eviction, and the armed forces were withdrawn after midnight.

Singhu
On Friday the epicenter of tensions was Singhu at Delhi-Haryana border, the site where the largest number of farmers have been staging protests since November 26, 2020. Despite the heavy deployment of police and paramilitary forces, which was even amplified following the Red Fort incident, around 200 people claiming to be local residents attacked the protesters, demanding that they vacate the area. They beat the farmers with sticks, pelted stones at them, vandalized their belongings, tried to uproot tents and set those ablaze, all the while shouting provocations and insults.

Initially the protesters tolerated the abuse, but as security personnel did nothing to stop the unfolding violence, some farmers retaliated. It was when the leaders were trying to pacify the protesters that police intervened, but baton charged the farmers and not the hooligans, and also resorted to firing tear gas. Several protesters and policemen suffered injuries in the attack. The station house officer of Alipur was stabbed, allegedly by a farmer, shortly after the stone-pelting began.

Farmers and journalists present at the site have raised questions about how these people could get so close to the camp when all entrances to the venue were sealed from the Delhi side, when roads around the area were dug up by the police to cut off access, when Delhi Sikh Gurdwara Management Committee (DSGMC) has been prevented from providing food and water to the farmers, and earlier in the morning Satyendar Jain, Water Minister of Delhi state government, was refused permission to visit the area. The attackers have been identified as members of the Hindu-supremacist group Hindu Sena allied to Rashtriya Swayamsevak Sangh (RSS), the ideological mentor of BJP. They were joined by some residents of Narela and Bawana areas of Delhi, who had been misled by Hindu Sena propaganda.

Protesting farmers have alleged that the attack was orchestrated by BJP-supported goons under police cover, to malign the farmers’ movement as violent and lawless. About 1.5 million farmers have been sitting at five border points outside Delhi for over two months, demanding repeal of three controversial farm laws that were passed in the Parliament in an arbitrary manner in September last year.