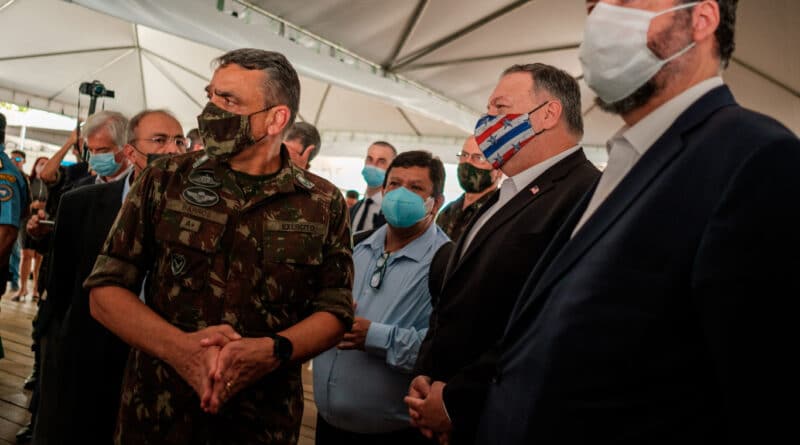 The sweeping $348 million aid package, which includes funding for healthcare, direct cash assistance, and even psychosocial support, runs in stark contradiction to a long-held US policy of sanctions on Venezuela.

Secretary of State Mike Pompeo has returned from his official visits to Suriname, Guyana, Colombia and Brazil, where he discussed the possibilities of regime change in Venezuela, a nation which has drawn Washington’s ire for over 20 years.

On Saturday the 56-year-old former CIA Director announced a $348 million package he said was a “response to the ongoing humanitarian crisis caused by the corrupt and illegitimate Maduro regime,” and signaled the U.S.’ “commitment to the Venezuelan people.”

“U.S. humanitarian assistance provides access to emergency food, safe drinking water, direct cash assistance, sanitation, and hygiene support, health care, medical supplies, psychosocial support, livelihoods, and protection for vulnerable groups including women, youth, and indigenous people,” the State Department’s press release on the issue read, programs that the U.S. government is failing to provide for its own citizens during the pandemic. It also noted that much of the cash would actually be going to neighboring countries that have taken in migrants, rather than individuals themselves.

Yet neither Pompeo nor the State Department noted that Venezuela is in such parlous economic straits in no small part due to the actions of the U.S. government. Washington has placed the country under ever-tightening sanctions for years, going after any individual, business or government who trades with the country. This has effectively led to an international blockade of the country, where Venezuela can neither import vital products like food or medicines nor sell oil, its primary export.

The long economic malaise also brought on by government incompetence, local elites’ intransigence, and a continued regional downturn has led to extreme hardship for millions, with the U.S. sanctions alone directly responsible for over 100,000 deaths, according to Swiss-American U.N. Special Rapporteur Alfred de Zayas, who visited the country and declared the U.S. guilty of “crimes against humanity.” Thus, it could be said that the State Department’s actions are merely attempting to put a bandaid over a deep cut they themselves stuck a knife into.

While in Colombia, Pompeo discussed regime change in Venezuela with Colombian President Ivan Duque, who described the Kansan as a “dear friend of Colombia” and accused President Maduro of Venezuela of crimes against humanity. In Brazil, Pompeo managed to get the Bolsonaro administration to sign off on his “Democratic Transition Framework” (DTS) for Venezuela as the way forward.

The DTS requires Maduro to resign and for the country’s Constituent Assembly to be completely dissolved, with all power going to the National Assembly, the only branch of government the opposition currently controls. From there, the National Assembly would appoint new members to the Supreme Court and the National Electoral Council. And while the DTS does not specifically state Maduro could not run for office again, Pompeo made it clear, stating, “Nicolas Maduro will never again govern Venezuela.” Therefore, it seems unlikely that Maduro, who was elected by a larger share of the electorate than Trump in 2016 or Obama in 2012, would sign off on such sweeping changes to the country that the Trump administration demands.

The United States also continues to support self-declared president Juan Guaidó, who has launched a series of unsuccessful coup attempts since January 2019. Washington has recently been transferring seized Venezuelan government assets to him so he can personally give every health worker $20 per month during the coronavirus pandemic. With the Venezuelan bolivar so weak, the stipend amounts to a sizable subsidy. Guaidó has retained strong bipartisan support in Washington, despite leaked contracts between himself and U.S. mercenary group Silvercorp showing he intended to rule alone after the coup, paying the organization to become his personal security force and crushing any resistance to his rule. Inside Venezuela, however, polls show only three percent of the population back him.

Biden: a break with the past or more of the same?

With elections coming up in November, it is possible that there will be a change in government in the United States before Venezuela. Democratic challenger Joe Biden currently holds a 6.5 point nationwide lead in combined polling. Over 100 organizations are urging the former vice-president to adopt a “good neighbor” policy with regards to the region. And while the Democratic National Platform is more progressive on Cuba, it makes clear that it wants regime change in Venezuela as well.

In order to better understand the potential for a different American path for Latin America under a Biden presidency, MintPress spoke with Dr. Barry Cannon, a sociologist specializing in Latin American politics at the National University of Ireland, Maynooth. Cannon was hopeful that a Biden presidency could mean a more multilateral approach in the region, some lessening of sanctions on Venezuela, and more openness towards negotiations. It could also mean the U.S. moving away from such close support with the far-right Bolsonaro administration and more cooperation with left-of-center governments, such as those in Mexico and Argentina.

“However, I wouldn’t expect any great departures from Trump-era policies,” he warned, noting that Colombia, “which has a far worse human rights record than Venezuela,” is, “almost always supported by the U.S.” While Washington will “continue to actively work against any Latin American country which challenges U.S. imperial power in the region,” such as Venezuela or Bolivia, where Movement to Socialism candidate Luis Arce is the frontrunner in October’s election. “It’s important to keep in mind the continuities in U.S. Americas policy with Trump in charge rather than the differences,” he concluded.