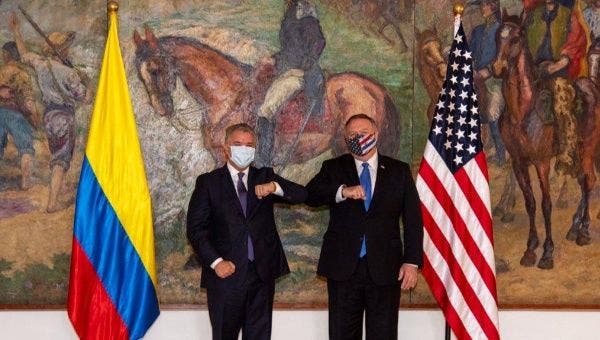 The Secretary of State called Colombia’s government an example in the fight against narco-trafficking, despite Colombia’s extraordinarily high rate of cocaine production.

A joint press conference focused largely on the topic of Venezuela, despite that the State Department had framed the visit as focusing on a range of issues, among them, free and fair trade, rural development, defense of democracy, and human rights in the ‘hemisphere’.

Pompeo thanked Duque for supposedly ensuring support for Venezuelan migrants, for supporting opposition puppet figure Juan Guaido as well as for, what Pompeo referred to as, the ‘stage of democratic transition’ in Venezuela.

The Secretary of State also said that the government of Ivan Duque has been an example in the fight against narco-trafficking, despite Colombia’s extraordinarily high rate of cocaine production,  a resurgence of irregular groups and lawlessness within its own territory.

Protests have taken over Colombia following a wave of massacres and assassinations of social leaders, largely in the more rural areas of the country, while the killing of Javier Ordonez, a final semester law student, provoked outrage in Bogota and beyond with youth demanding an end to police brutality and impunity.

13 people were killed by security forces in protests, the majority of which were killed on the first night of protest, yet Washington has only spoken of human rights in the context of ousting the government of Venezuela and handing over power to an entity hand-picked by the United States Department of State.

Colombia will be Pompeo’s final South American stop before heading to Texas. The tour began on September 17th and included official visits to Suriname, Guyana, and Brazil before arriving in Colombia.

Wrapping up a good visit to Bogota. The United States is a strong ally of Colombia’s efforts to improve democratic governance, counter narcotics trafficking, and promote transparent investment and sustainable economic growth. pic.twitter.com/aOQ6Z4DbCW

On Friday, the top U.S. diplomat met with Guyana’s new President Irfaan Ali, with talking points on helping U.S. companies access and have success in Guyana and also on “democracy in Venezuela.”

Guyana and the United States will begin joint maritime and airspace patrols in a new ‘security’ agreement, which will come into effect by next Monday.

The United States has already militarized the Caribbean, a far distance from its shores, and maintains a permanent military and DEA presence in Colombia yet the country has not lowered drug production or exports, nor has Bogota been able to curb internal violence.

Since the Colombian President’s mandate began two years ago, Ivan Duque has met with Pompeo on four occasions, largely for the purpose of strengthening strategic coordination on efforts to overthrow the democratically-elected government in neighboring Venezuela.

Colombia: Hundreds accompany the body of 27-year-old Cristian Hurtado Meneses, who was shot dead by police in Soacha, near Bogota, during demonstrations against police terror and the torture killing of Javier Ordóñez. Cristian was an electrician and athlete. pic.twitter.com/44IjW6kFqK