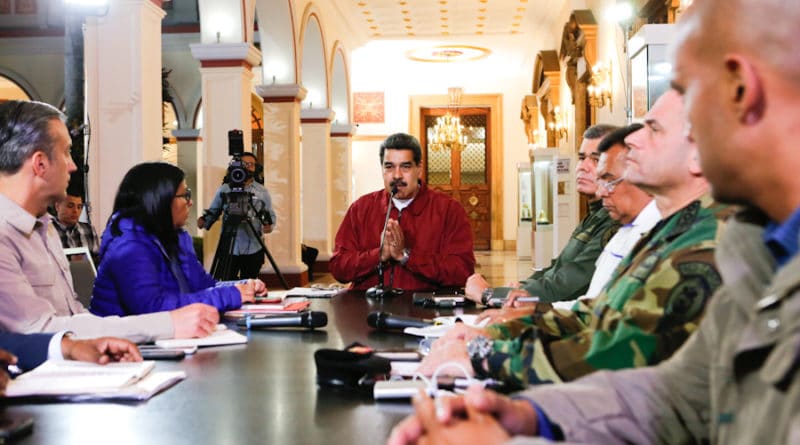 The President of Venezuela, Nicolás Maduro, announced this Friday night the declaration of the State of Alarm according to article 338 of the Constitution, to face the threat from the Covid-19 coronavirus, a few hours after confirming two cases of the virus, which are already being treated. “No country is sufficiently prepared to face this pandemic,” he said. In a video conference with governors, mayors and protectors, the President emphasized: “Do not think that this is just another crisis. We are in emergency. Zero laziness, zero excuses, I demand dedication 24 hours a day!”

On the national radio and television broadcast, President Maduro reported that the suspension of work activities by regions is being evaluated, “according to the powers that the state of alarm gives me.” He urged the governors and heads of the Strategic Regions of Comprehensive Defense (Redi) and Zones of Comprehensive Defense (Zodi) to begin “the preparations for a suspension of work activities that might be activated in the next few hours and days, strategically and progressively.”

Maduro emphasized the severity of this pandemic. He pointed out that for 6 weeks protocols have been activated to prevent the entry of the Covid-19 coronavirus into Venezuela. Venezuela is the 125th country to have the virus, he explained. He highlighted the serious effects that the pandemic has caused in countries in Europe, such as Spain or Italy, and the statements of the authorities in the United Kingdom and Germany. He also noted that the World Health Organization has moved the epicenter of the pandemic from Asia to Europe, and that in the United States, it has reached 46 of the 50 states of the Union.

“I say to the people of Venezuela: No country is sufficiently prepared to face this pandemic . I say this first of all to the high political, military and police authorities present. Be warned! Let’s wake up! Let’s not think that this is just another crisis, and ‘I work 8 hours and go home’. Don’t do that! We are in a declared emergency! Zero bureaucracy! Zero laziness! Zero irresponsibility! Zero lack of coordination! It is time for coordination, discipline, sacrifice, effort, dedication! 24 hours a day! I demand the Bolivarian government 24 hours a day!”

He demanded that governors and mayors to work 24 hours a day “to manage this crisis, to take it up, to face it and to overcome it as we have to overcome it. It is not a regular contingency.”

Maduro indicated that he was informed at 1 a.m. this Friday of the two cases of people with Covid-19. He added that the two cases come from the Miranda state, in eastern Caracas. The 41-year-old woman was in the United States, Italy and Spain. “She returned asymptomatic; this already has our attention and control, and the case will be followed.” The 52-year-old man was in Spain for a month and returned on March 8; he is being seen in a private clinic, under care and coordination.

Article 337. The President of the Republic, in the Council of Ministers, may decree states of emergency. Circumstances of a social, economic, political, natural or ecological nature, which seriously affect the security of the Nation, of the institutions and of the citizens, are expressly classified as such, and the powers available to them are insufficient to face such facts. In such case, the guarantees enshrined in this Constitution may be temporarily restricted, except those related to the rights to life, prohibition of incommunicado or torture, the right to due process, the right to information and other intangible human rights.

Article 338. A state of alarm may be decreed when catastrophes, public calamities or other similar events occur that seriously endanger the security of the Nation, or of its citizens. Said state of exception will last up to thirty days, being extendable for up to thirty more days.