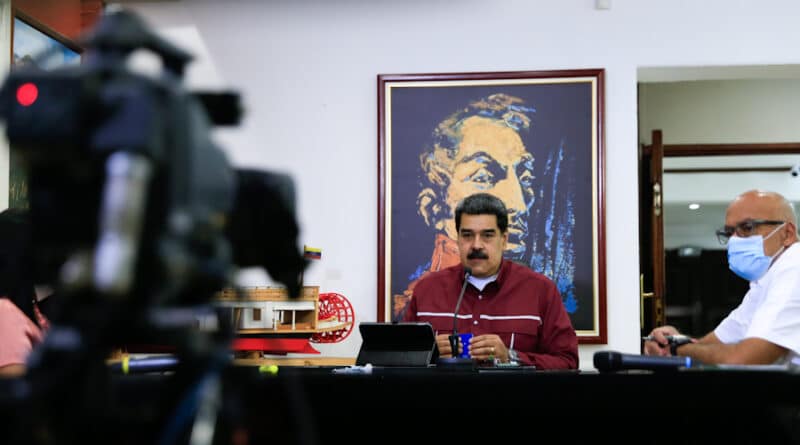 Venezuelan President Nicolás Maduro called on the Popular Power to be alert on destabilizing actions promoted by the Colombian and the United States government to try to derail the parliamentary elections scheduled for December 6. He said that the Trump administration “has approved that the CIA (Central Intelligence Agency) engage in covert operations of a terrorist nature against Venezuela,” ahead of the parliamentary elections, he said during the videoconference held this Tuesday with governors and local authorities.

The head of state said: “They have given the CIA the green light to carry out covert terrorist operations against oil, electrical, military, electoral and public service targets, among other dirty operations that they have been used to carry out for 60 years around the world. ” He also reported that the so called US anti-drug office, DEA, is one of the operating agencies involved in the plan.

“I take full responsibility for telling the people so that we can prepare and fight for peace and internal stability in Venezuela,” he added.

Despite the multiple complaints made by the Venezuelan dignitary to the Colombian authorities, beginning with its president Iván Duque, the evidence regarding the participation of irregular armed groups that are operating from Colombian soil to attack the Venezuelan territory has been ignored in Colombia.

The Venezuelan head of state recalled Operation Gideon, a failed armed incursion by a group of mercenaries on Venezuelan coasts, which was neutralized by Operation Negro Primero on May 3rd this year. He recalled that this incursion came from the Colombian Guajira and had the support and backing of Colombian authorities, according to the testimonies of the captured mercenaries.

President Maduro recalled that, despite the fact that the attack was denounced several months in advance, with names, places and coordinates of the training centers, nevertheless “they (Colombian authorities) did not stop the attack, they supported it. Do you know why? For the hatred they have for the people of Venezuela, for the desire for revenge, for the despair they have, because Venezuela is victorious and is teaching them a lesson in dignity, morals, ethics, sovereignty, Bolivarianism and because they have not been able to deal with us, nor will they be able to,” he stressed.

President Maduro, faced with the threats of new criminal actions against the nation backed by the US government, ratified his call to the Venezuelan people to be vigilant and alert.

“I take full responsibility in telling our people, you, brave men and women of our country, so that we prepare and give the fight that we are going to fight for peace and internal stability in Venezuela, until the end of the year, in peace, in recovery, in progress, in resistance and in victory ” he said.

Special plan
“We are going to a Special Plan in perfect civic-military-police union in all states, municipalities and Peace Quadrants to guarantee stability, peace and parliamentary elections in Venezuela,” said President Maduro. “The fight that we are going to mount is for the tranquility and peace of Venezuela to end 2020 in peace, in recovery, resistance, improvement and victory.”

The early actions within the Special Defense Plan of Venezuela are being coordinated with the organized Popular Power, the UBCH, the Chiefs of Streets and communities, the CLAP, the Communal Councils and Communes and with the Bolivarian National Militia.

For this purpose, the Presidential Command has been reactivated as operational command, with the ability to act in real time 24 hours a day. Likewise, the state and municipal special command posts are being reactivated, in perfect civic-military-police union with the 2,361 Quadrants of Peace throughout the country.

“Attention, Bolivarian National Militia: I ratify the order to 4,512,000 militia men and women. Immediate attention in Quadrants of Peace, in command posts through the General Commander of the Militia, General Bernal Martínez and the Strategic Operational Commander of the FANB, Admiral in Chief Remigio Ceballos!” President Maduro ordered.