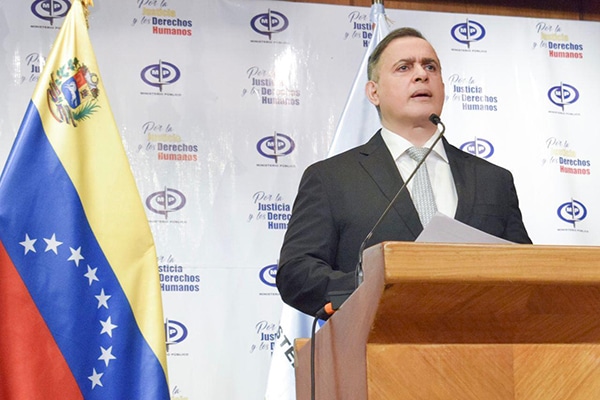 Saab offered the first results of the investigations into the case, noting that of the nine implicated, two are already arrested and charged with murder and misuse of firearms. After the press conference, he reported that three more suspects were captured, for a total of five.

“They wanted to cover up the extrajudicial execution of two innocents as if it were an armed confrontation,” he revealed at a press conference broadcast by Venezolana de Televisión.

“Given the first information, Andrés Eloy Zacarías Nieves and Víctor Manuel Torres Guerra could have been victims of extrajudicial executions,” added the prosecutor.

The first investigation procedures have found Chief Officer José Salas, Chief Officer Néstor Olano (already charged with qualified homicide and misuse of firearms), and Attaché Nerio Álvarez, against whom there are already warrants for the events. Officers Andrés Díaz and José Moreno also have arrest warrants and Officer José Contreras is also already in custody.

“For me, they are compromised officials and they must be fully marked with their names and surnames so that they never appear on a police force again.”

The facts
From the expert investigation carried out and with autopsy protocols, the Public Ministry determined that the deceased were at a lower height than their shooter, on their knees or sitting, with which the hypothesis of execution gained traction.

On August 21, after an alleged confrontation, Andrés Eloy Nieves Zacarías and Víctor Torres, popular communicators and workers of a community TV channel in Cabimas, were killed. The incident occurred during an operation carried out by FAES officials at the station’s headquarters.

The prosecutor explained that FAES officials take the adolescent out of the house and then three detonations are heard. Immediately the officials removed the bodies in a white double cabin van with the FAES logo.

The first detainees were officials José Contreras and Néstor Olano, who were charged for homicide classified as treachery, improper use of an organic weapon, simulation of a punishable act and violation of domicile by a public official.

Subsequently, due to the advances in the investigation, an arrest warrant was requested against Freddy Rafael Deroy Ramírez, Deputy Chief Supervisor of the FAES Zulia. An arrest warrant was also requested against Deivid Miguel Guerrero Moreno, FAES Zulia commissioner attaché. Both were accused of being accomplices in the crime of homicide qualified with malice and association.

Additionally, an arrest warrant was requested against the prosecutor of the Public Ministry, Jackbe de los Ángeles Galbán Azuaje, for the alleged commission of the crimes of concealment and association. Said former official is close to José Salas, head of the group acting in the events, said the prosecutor, who pointed out that, once she learned of the investigations initiated by the Public Ministry, she appeared on her own at the FAES Zulia headquarters with a private vehicle and notified Salas, both then proceeded to flee. Saab reported that Galbón Azuaje was fired after these events.

After the press conference, the Attorney General reported via Twitter the capture of Freddy Deroy, Deivid Guerrero and the former prosecutor Jackbe Galbán, a total of 5 captured.