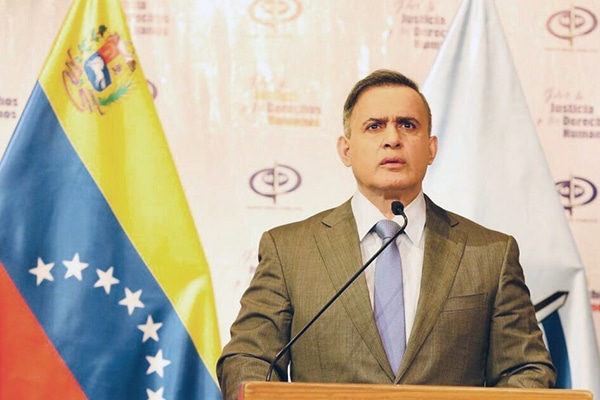 Venezuelan Attorney General, Tarek William Saab, announced the appointment of the 67th National Prosecutor’s Office to investigate five people named by Juan Guaidó as “officials” of his supposed interim presidency, for negotiating a contract to seize assets belonging to the Venezuelan State in Caribbean countries.

From the headquarters of the Public Ministry in Caracas, the head of the criminal division indicated that alleged “officials” appointed by Juan Guaidó – who proclaimed himself interim president of Venezuela on January 23, 2019 – were in charge of negotiating with the Caribbean Assets Recovery consortium (made up of the companies “Lock in Capital” and “Global Risk Management”) an agreement presented to Guaidó last year, to “illegally appropriate a significant amount of assets, accounts receivable and other property owned by the country that are distributed in 19 countries part of the Petrocaribe alliance.”

The directors of the Caribbean Assets Recovery consortium, Jorge Reyes and Pedro Antar, “would have requested as consideration for their services, the right to appropriate 18% of everything that could be stripped from the Venezuelan State,” stated the Attorney General.

RELATED CONTENT: Venezuela: The 2016-2020 National Assembly – Part of the Plan

But in addition, the representatives of Juan Guaidó “requested a payment (bribery) in the amount of $750,000 for the award of the aforementioned contract, and also demanded that once the appropriation of the country’s assets had begun, they be given half of the 18 % requested by the Caribbean Assets Recovery consortium.

He indicated that those under investigation are:

In this case “the commission of crimes of treason, money laundering, usurpation of functions and association to commit a crime is presumed,” the institutional spokesperson commented.

The representatives of the Caribbean Assets Recovery consortium (CRA), Jorge Reyes and Pedro Antar are also under investigation.

Regarding the companies involved, the high official added that “these firms with such bombastic names are nothing more than empty shell companies used by these two alleged businessmen to do business of dubious legality.”

The inquiries made about Reyes and Antar have revealed that “there are serious accusations of illegal activities against them in the United States and other countries. One was sanctioned for fraud against investors and the other appears linked to an investigation of money laundering in fraudulent exports from Ecuador to Venezuela using the Sucre,” Saab revealed.

Attack against Venezuela
In the opinion of the Attorney General, “it is a new version of the contract signed by Guaidó and Juan José Rendón with Jordan Goudreau to invade Venezuela with an army of mercenaries. On this occasion, the intention was to hire rogues to steal assets from the country in the Caribbean. As with the mercenaries, they tried to sign a contract to commit a crime against our country, which in the end they did not achieve.”

Bond trading
Regarding the negotiation of debt with bondholders of PDVSA and Electricidad de Caracas, the head of the criminal division sent a message of support for the proposals presented by the Vice President of the Republic, Delcy Rodríguez, whose objective is to “prevent the investors who have legitimately acquired these papers being affected by the unilateral sanctions imposed by the US on Venezuela.”