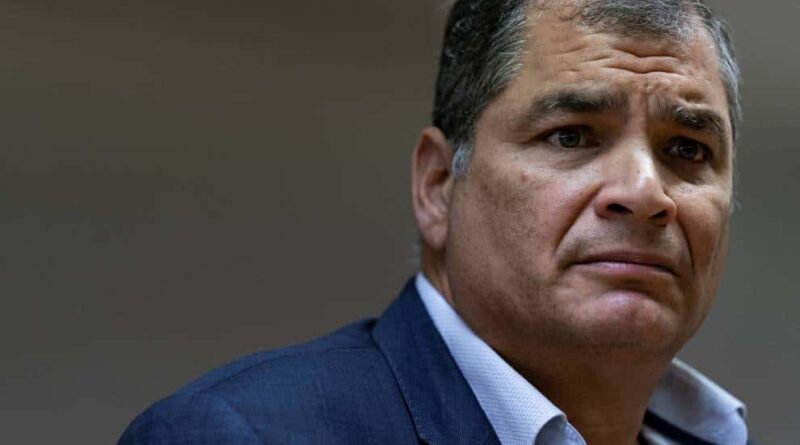 He will have as running mate Andrés Arauz Galarza, a former minister who was part of his administration, who will run for President.

Former Ecuadorian president Rafael Correa said on Tuesday that he agreed to stand as a candidate for the Vice Presidency of his country, in the elections to be held in February 2021, “because the country is going through the worst crisis in its history.”

“I aspire to rescue my country from the tragedy it is experiencing, that we finally get out of under development,” said the former president, in conversation with RT.

Correa criticized the management of the current president, Lenín Moreno, for the mismanagement of the coronavirus pandemic that hit the country and the economic crisis in which the nation had already been plunged since last year, which was accentuated in recent months due to the health emergency.

“Of course, the coronavirus was not created by this traitorous, nefarious government, but the tragedy is, we are one of the countries in the world with the highest number of deaths per inhabitant, that corresponds to criminal negligence,” the former president emphasized.

In his bid for the Vice Presidency, Correa will run togther with Andrés Arauz Galarza, a former minister who was part of his administration, and who will run for President.

Correa explained that after the presentation of the candidacies, which both candidates made this Tuesday, there will be four days of socialization and then the party primaries will be held where the running options will be accepted.

RELATED CONTENT: Chancellor Arreaza: Unasur Would Have Helped Stop Covid-19 in the Region

Subsequently, according to the calendar of the National Electoral Council (CNE), between September 18 and October 7, the registrations of these candidates will be made.

The obstacles to the ticket
The president criticized the recent decision of the electoral body to establish that, once the primaries are held, the candidates chosen for national offices must accept, in person and in the country, that candidacy before registering it with the CNE. In addition, the form must be signed in front of an official of the agency.

“They have done that so that I cannot accept my candidacy […] What’s the point of that? To prevent me from participating,” said the former president, who currently resides in Belgium.

He recalled that, upon returning to the country, he runs the risk of being arrested, since he has two arrest warrants against him, one for the ‘Bribery Case’, whose conviction was ratified in the second instance last July and is currently on appeal and the ‘Balda Case’, frozen because it must be tried in person.

The president does not have enforceable sentences that prevent him from participating in the electoral process, but the arrest warrants are still in force, which could be applied upon arrival in the country.

The acceptance of the candidacy is the only face-to-face step, since the specific registration — that is, the process that begins on September 18 — can be done online, as defined by the CNE, due to the coronavirus pandemic that affects the country .

However, the ex-president hopes that this requirement of acceptance of the in-person application will be eliminated, since “it is something that does not exist in the law.”

In the interview, Correa recalled that, in addition, the party in which Correísmo had taken refuge, Fuerza Compromiso Social, had been suspended by the CNE. Although the measure was reversed, the evaluation of the movement is still in process, so, in order to stand for the elections, they opted for another political party that accepted them, in reference to Centro Democrático.

“We are facing a dictatorship, which is sparing no effort […] because they know that we are going to defeat them in the next elections,” he said.