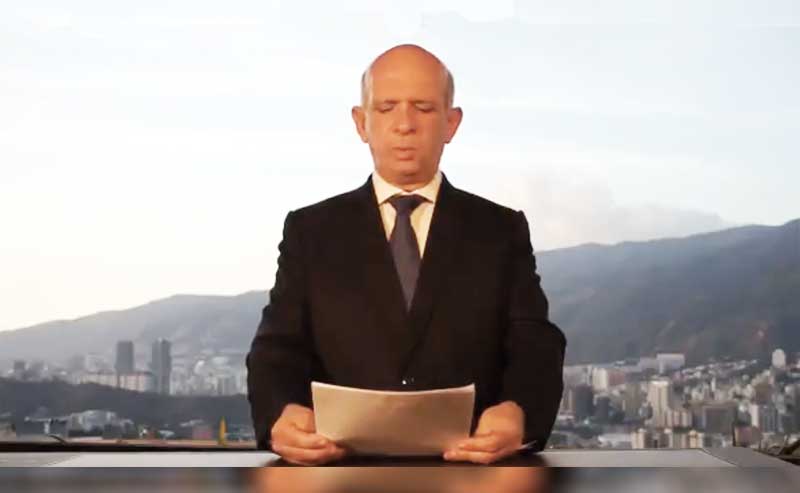 Maybe the last time you heard about “El Pollo” Carvajal was in February of this year when he became the first general of weight in the Bolivarian Armed Forces to “recognize” the self-proclaimed deputy, Juan Guaidó.

Or perhaps, later, in March, when he demanded the defense minister, Vladimir Padrino López, to curb “the brutality” of President Nicolás Maduro, after the arrest of Roberto Marrero, personal assistant of the Self-Proclaimed, was known.

It may also have been in April, when the former director of the Directorate of Military Intelligence announced that he possesses strategic information about the presumed drug trafficking network of the national government, the figureheads of each leader of the PSUV and their assets abroad. “But these data should be in the hands of agencies that investigate it. Nothing will be gained by publishing the data before the public,” the retired general wrote on his social networks.

However, you may only remember “El Pollo” as Venezuela’s consul in Aruba in 2014 when he was arrested following a US extradition request for the alleged crimes of conspiracy and execution of drug trafficking, money laundering, obstruction of justice and assistance to the FARC, a group that was -then- included in the list of terrorist organizations of the gringo State Department.

On that occasion, the Supreme Court of Justice of Venezuela issued an appeal against the illegal and arbitrary detention of Carvajal. Almost 72 hours after his arrest he was released and the Kingdom of the Netherlands acknowledged that the detention took place outside the international treaties for diplomatic personnel.

In the middle of the II PSUV Congress, President Maduro received him and said that Carvajal “gave the biggest blows to drug trafficking: 75 drug lords were handed over to Colombia and the United States.”

Until now, each of the charges  against Carvajal was rigorously denied by President Hugo Chávez or Nicolás Maduro.

Welcome to America
The arrest of Major General Carvajal in Madrid, Spain, was announced by several journalists before police sources confirmed the capture.

If he were transferred to the United States and convicted of the crime of “conspiracy to knowingly distribute cocaine in the United States,” the former Venezuelan military officer could face a life sentence.

It is not a minor fact that the New York prosecutor, Preet Bharara (the same one who prosecuted the nephews of Cilia Flores) is the one who filed the accusation against General Hugo Carvajal Barrios in Manhattan. The other case is in Florida. Both are kept open and out of custody.

US Senator Marco Rubio wrote on his Twitter about the arrest: “Hugo Carvajal, former military intelligence director of Venezuela is safe and in custody. Soon he will come to the US to provide important information about #MaduroRegime. Bad day for #MaduroCrimeFamily. ”

He will soon be coming to the U.S. to provide important information about #MaduroRegime.

Bad day for the #MaduroCrimeFamily

Some already foresaw the flight to Uncle Sam’s territory since he granted an interview to the New York Times in which he accused minister Néstor Reverol of being linked to drug trafficking and Tareck El Aisami having ties to Hezbollah.

In addition, after the pardon offered by Donald Trump to Venezuelan soldiers who distanced themselves from Maduro, it was logical to think that some had an easy price to meet.

“One of them was not exactly Carvajal. Those who knew him still can not believe it because of his many demonstrations of loyalty and commitment. It is difficult to specify the price of a man, but you also have to let go of your mind to imagine the levels of “creativity” that the US uses to achieve its goals,” wrote an analyst in Supuesto Negado when many still could not believe this from “El Pollo”.

In Venezuela, the majority bet that Carvajal will follow in the footsteps of another retired military officer, corrupt and “chavista”, jumper to the other side, Rafael Isea, (former finance minister, governor of Aragua and president of the ALBA Bank) who became a protected witness of the DEA after have alleged classified information about drug trafficking and money laundering in Venezuela of “high government officials”.

For his collaboration with the authorities, the justice system of the gringo erased the Chavista past of Isea and eliminated his crimes (he  has been sought since 2014 by Interpol for alleged corruption due to the paralysis of 5 infrastructure projects and the deviation of 58 million dollars and 9 million euros ). Now he lives peacefully in the US and even grants, from time to time, interviews.