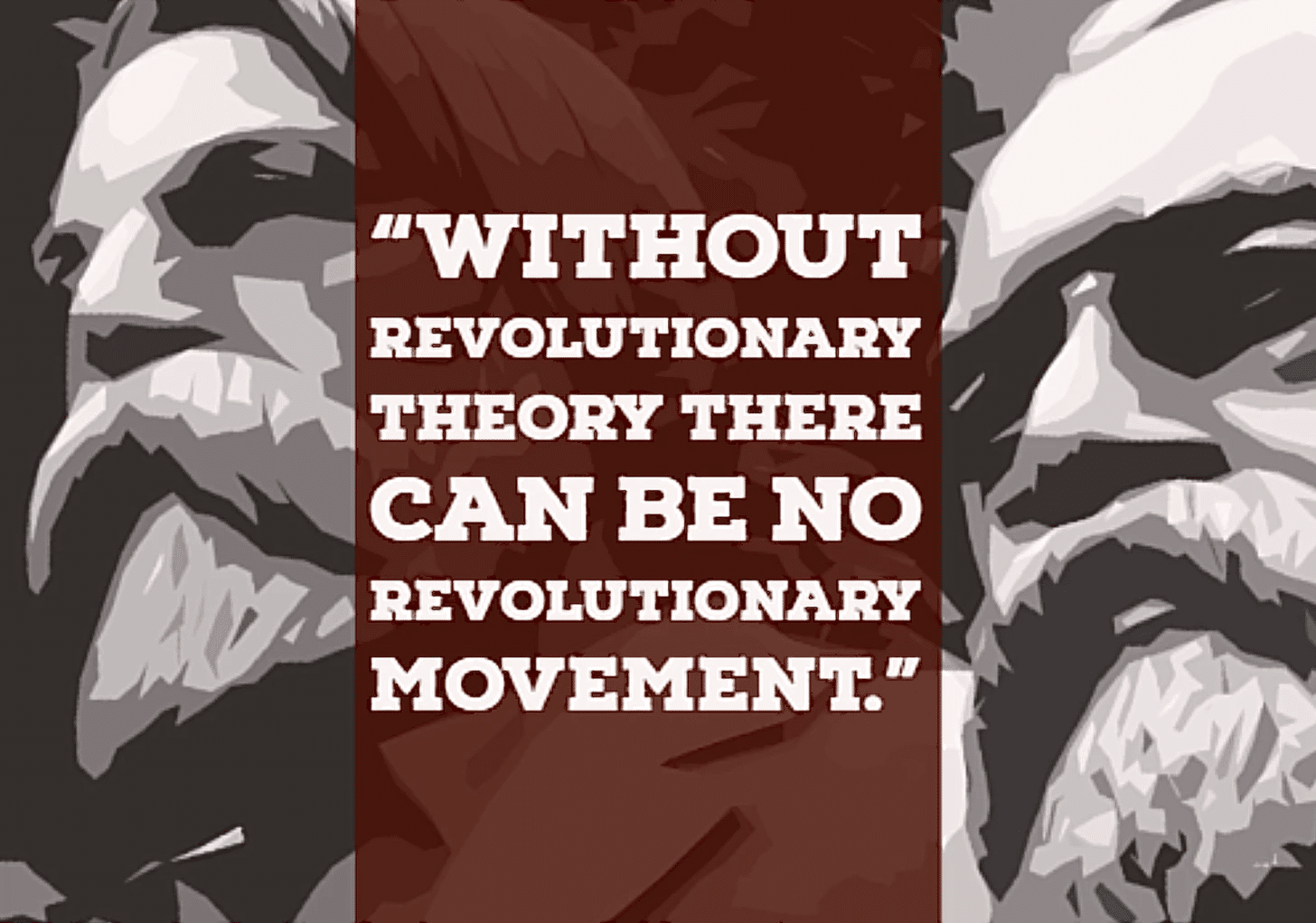 Featured image: Poster with Lenin's famous words: "Without revolutionary theory there can be no revolutionary movement." Photo from Rainer Shea.

“Without revolutionary theory there can be no revolutionary movement” was the conclusion that Lenin came to in the section of What Is To Be Done? which pertained to the concept of “freedom of criticism.” As Lenin assessed, this concept had been twisted by the opportunists to refer not to the kind of criticism which improves revolutionary work, but which seeks to discredit revolutionary work. They had made it mean the freedom to attack the ideas of class struggle, dictatorship of the proletariat, and overthrowing the capitalist state. The counterrevolutionaries had taken criticism, a crucial part of Marxism, and made it diametrically opposed to Marxism.

This shows how nothing is above criticism—even the concept of “criticism” itself. Any facet of revolution can be co-opted, just as anything revolutionary can be commodified by capitalism. When you see liberals appropriating the language of class struggle to make empty promises for votes, it’s like when companies sell Che Guevara shirts; the things that these words and figures stand for get drained of their meaning, twisted into tools for perpetuating the system. The challenge is knowing when we’re aiding in this dynamic of distorted revolutionary theory, because when we do, it feels to us like we’re promoting sound theory.

For instance, when headlines recently reported that Los Angeles gangs are sending their members to follow and rob wealthy residents, online leftists reacted with praise. But what about the class character of the organized crime entities receiving the praise? What about the material impacts of the act? Gangs are fundamentally petty bourgeois in nature, and they’re used by the CIA to distribute drugs to marginalized communities while sowing division among the lumpen. This is reflected underneath the surface of this Robin Hood-esque media narrative about those LA gangs; what they’re doing is not actually revolutionary, because it’s not furthering any workers movement. If anything, it’s creating an excuse for intensified policing of the city, which is already one of the country’s most horrifically unequal and misery-ridden places. If you want to glorify thus, you should consider exactly what you’re portraying as good, and how this might impact the decisions that you make as an organizer; would the conditions truly call for your group to start imitating the gangs by committing crimes, or would you only be entertaining a fascination with the violence of a lumpen environment that you’re not even necessarily connected to?

Similar flaws in thinking can be found when anarchists momentarily seize city blocks, or when Maoists engage in guerrilla warfare, and leftists who haven’t yet been adequately acquainted with theory assume that these things deserve support. When these little victories occur, we must always ask: why are they so small in scale, and why are they so often temporary and tenuous? The anarchist Capitol Hill Autonomous Zone that was created two years ago wasn’t strategically built to last, but as a symbolic gesture that didn’t improve oppressed people’s conditions; this was shown by the project’s welcoming of liberals who promptly dismantled it, and by the picking of a location that was strategically absurd from a guerrilla warfare perspective. Namely near a militarized police station, during a time when the state’s forces hadn’t been made vulnerable in a way which would have let a breakaway zone there be sustainable.

The Maoist guerrillas in India and the Philippines have a better grasp of military theory than imperial center anarchists, but they too approach the struggle from a place of reaction rather than of practicality. It was Filipino communists who convinced me to stop supporting the Maoist guerrillas of the Philippines; their argument was that the Maoists are serving only to hold back the revolution by engaging in guerrilla struggle that’s based not around correct judgement of the conditions, but in ultra-leftism.

As Stalin said, the ultra-lefts are as much opposed to revolution as the rightists are. And though the context in these places today is different, we see this reflected in how the Maoist organizations of the last half-century have conducted themselves. As Prakash Karat of the Communist Party of India (Marxist) has assessed, the Naxalite Maoists have stuck with a dogmatic embrace of adventurist tactics:

Naxalite tactics had been characterized by a dogmatic and sole reliance on armed struggle in its first phases. This was based on the sectarian ‘people’s war’ thesis put forward by Lin Biao at the ninth congress of the CPC (Communist Party of China). In India this brand of adventurism was interpreted by Charu Mazumdar to be the tactic of individual terrorism. After the debacle of this tactic in 1970-71 many groups split away condemning the ‘annihilation theory’.  However the pro-Charu groups have persisted in defending this ‘revolutionary line’ and continue to be practitioners of terrorism. The pro-Lin Biao groups in West Bengal, the Vinod Mishra group in Bhojpur, the People’s War group in Andhra Pradesh, and the Venu group in Kerala have all in some form or another continued to rely on the line of annihilation. The difference exists only in the emphasis. The CRC (Venu group) began talking of a ‘revolutionary mass line’ in 1979, by which they mean that annihilation of any enemy must be part of the mass struggle and resorted to only if the masses of an area approve of it. Except for the extreme fringe of the pro-Lin Biao groups the other groups who uphold [this] line currently talk of annihilation of the class enemy as an extension of the mass line. Though many groups have denounced the past practices as wrong, the condemnation has stemmed more from the failure of the tactic rather than any honest self-introspection as to its anti-Marxist character. Even those who renounce it as anti-Marxist, still cling to the theory of permanent armed struggle.

This was written in 1985. The consequence of the Naxalite faction’s lack of willingness to self-criticize on a fundamental level, and reject the adventurist ideas that led to these errors, has entrenched the division within India’s communist movement. The split that happened in Russia’s communist movement before the revolution has repeated itself, with the ultra-left faction continuing armed struggle despite there still being demonstrable evidence that electoralism is worth pursuing—and that refraining from going on the offensive is likely the way to gain the broadest support from the masses. In both the Philippines and India, ultra-leftism has produced factions which represent the adventurists that Lenin warned about:

When Marxists say that certain groups are adventurist, they have in mind the very definite and specific social and historical features of a phenomenon, one that every class-conscious worker should be familiar with. The history of Russian Social-Democracy teems with tiny groups, which sprang up for an hour, for several months, with no roots whatever among the masses (and politics without the masses are adventurist politics), and with no serious and stable principles. In a petty-bourgeois country, which is passing through a historical period of bourgeois reconstruction, it is inevitable that a motley assortment of intellectuals should join the workers, and that these intellectuals should attempt to form all kinds of groups, adventurist in character in the sense referred to above. Workers who do not wish to be fooled should subject every group to the closest scrutiny and ascertain how serious its principles are, and what roots it has in the masses. Put no faith in words; subject everything to the closest scrutiny—such is the motto of the Marxist workers.

Whether the problem is right opportunism (as we see in the social democrats) or adventurism (as we see in many anarchists, Maoists, and ultra-left fetishists for gangs), this scrutiny is the way to stop us from being led astray. Have Maoist guerrillas, gangs, and anarchists done good things? At times yes, but that doesn’t exempt them from ideological scrutiny. The same goes for Marxism-Leninism, despite it representing a superior revolutionary route to all of these factions; we must judge something by how well it advances the global proletarian movement, not by what it claims to be.

Featured image: Poster with Lenin’s famous words: “Without revolutionary theory there can be no revolutionary movement.” Photo from Rainer Shea.