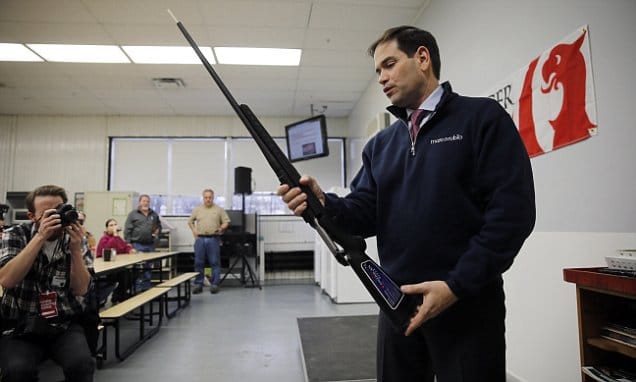 The Republican senator from Florida, Marco Rubio, a recognized active and extremist critic of the current Venezuelan government, posted a tweet with two photos of Muammar Gaddafi, who was Libya’s leader for 42 years, on Sunday afternoon. In one of the images the president smiles relaxed, while in the other he is seen with a bloody face, at the moment of being executed by a mob after the coup supported by the US in 2011

The message, which already has more than 12,000 responses, has caused a bitter controversy among Internet users, many of whom consider it inappropriate and have reported is as ABUSIVE to Twitter to eliminate it as offensive.

The leaks portal WikiLeaks commented on Rubio’s controversial tweet, stating that “nothing says more [about] human rights than delighting in a human being who is being sodomized to death with a bayonet.”

For its part, the American journalist Ahmed Baba believes that the image, in addition to “unpleasant”, serves to “send a message to Maduro”, while warning of the danger of publishing something like this so that countries fear “the Libyan model” .

In the same vein, journalist Ben Norton also claims that “Rubio threatens Venezuela with the same death and destruction” suffered by Libya, as well as its president. In this regard, he recalled that NATO worked with al Qaeda extremists “to overthrow Libya, an oil-rich nation, and turn it into a failed state with slave markets.” In a later tweet he recalled that Gaddafi was “brutally murdered by Salafist-jihadist representatives of NATO,” one of whom would later immolate himself in Manchester, killing dozens of people.

A netizen asked for the resignation of Rubio for this tweet that “clearly calls for the lynching of the democratically elected president in Venezuela,” while another user shared views of cities in Iraq, Libya, Yemen or Syria before and after the US invasion .

UNTIL THE OPPOSITION REFUSES IT
Even from the Venezuelan opposition voices have been raised that dismiss the tweet as “arrogant” and “counterproductive”, assuring that “if Venezuela ends up like Libya, it would be an absolute defeat” emphasizing that “brutal revenge” is not the way to go for the Bolivarian country.

For his part, Juan Carlos Monedero, professor of political science at the Complutense University of Madrid, writes on Twitter that the senator summarizes with this image what he thinks: “make a war in Venezuela as in Libya, assassinate the President and try to control  the oil”.

Rubio, who is Cuban-American, is among the members of the hardliners of the Senate and stands out as one of the instigators in the Capitol of pressure campaigns against leftist leaders in Latin America, especially in the cases of Cuba and Venezuela. In 2011 Rubio himself applauded the death of Gaddafi, and even criticize the then US president, Barack Obama, whom he labeled as “enemy of the US”, for not having gone far enough in his military intervention in the North African country.

ECHOES OF THE PAST
Gaddafi, who for decades opposed the US, was ousted in 2011 during a military intervention led by Washington under Obama. The Libyan rebels came upon him and brutally executed him in public under democratic slogans, a fact that marked the beginning of a period of instability and armed struggle for power in Libya and led to the effective disintegration of the country, as well as the growth of the Islamism and tribalism. One of the images shared by Rubio is a screenshot of the video of the assassination of the Libyan leader.

On October 20, 2011, numerous photos and videos appeared on the Internet that recorded the moment of Gaddafi’s death. In the recording of his capture it is observed how the Libyan leader, wounded in the ground, is beaten by a group of people while several shout “Allahu akbar” (‘Allah is great’, in Arabic).

In an article published on the AlterNet portal, journalist Nicolas JS Davies argues that the NATO intervention was misleadingly justified before the UN Security Council as an effort to protect Libyan civilians. According to Davies, NATO carried out 7,700 air strikes, killing between 30,000 and 100,000 people, leaving whole villages reduced to rubble. Today, the country is still mired in sectarian and tribal battles, while Islamist militias, many of them trained and armed by specialists from the US and Europe, compete for power.