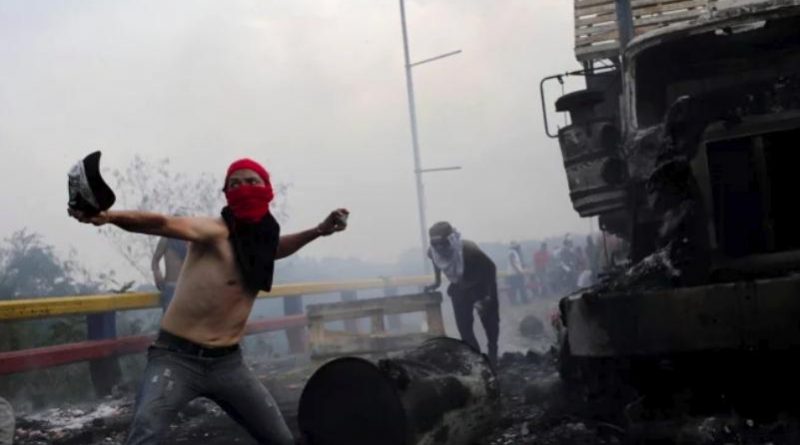 More than 300 injured was the result of the attacks that affected this weekend the border crossings this Saturday in the municipalities of Bolívar and Pedro María Ureña, where thousands of citizens deployed in defense of sovereignty and peace. This was stated on Sunday, February 24 by Freddy Bernal, political protector of Tachira. He denounced an attack against a border post in La Mulata and the burning of the CLAP food center in Junín. Criminal gangs and opposition groups from Colombia, make Molotov cocktails before the inert gaze of the police forces of that country, without any reason.

“The Bolivarian forces registered 315 wounded, some with bullets, others with blunt objects and Molotov cocktails. There are 3 serious but that are out of danger. We want to emphasize that there was no death despite the violent attack suffered during 15 hours of battle against thousands of patriots fighting and defending themselves, “explained Bernal, according to a press release of the Protectorate of Táchira.

From the Simón Bolívar International Bridge, Bernal gave statements to Venezolana de Televisión as part of a tour conducted in the company of Diosdado Cabello, president of the National Constituent Assembly; Admiral Remigio Ceballos, CEO of the CEOFANB; accompanied by military authorities of the region such as the MG Manuel Bernal Martínez, the GD José Noroño Torres.

He said that they will continue with the civil and military deployment throughout the border to protect sovereignty and peace, and that the people will remain alert to any aggression that intends to impose interventionist forces through new attacks against our country.

The spokesman of the National government in Táchira sent a message to the citizens who oppose the Revolution but who reject the violent actions “you will continue to be deceived again and again by paper leadership, by unscrupulous people, or by words you can not to be foolish to be manipulated by a madman imposed by the
US empire and who intends to lead to madness “he reflected.

Attack on La Mulata border post and burning of CLAP center in Junín
During the day of this Sunday, Bernal explained that on repeated occasions irregular groups kept attacking the international bridges Simón Bolívar (San Antonio) and Francisco de Paula Santander (Ureña). “Under both bridges a significant number of paramilitaries and criminals under the complacent gaze of the Colombian national police and the Colombian National Army, ratifying this that the government of Iván Duque is part of a permanent aggression against peace in Venezuela.”

“At dawn today (Sunday), paramilitary elements attacked the border post of La Mulata where 25 Bolivarian National Guard defended this position with courage”, being attacked by more than 60 members of shock groups from Colombia. “They tried to mount another false positive, there were no major consequences and the paramilitaries ceased their intentions,” Bernal explained.

On the other hand, he reported on the burning in the Junín municipality of the CLAP Supply Center and of the Grand Sovereign Supply Mission. “These as a kind of reprimand for the resounding military, political, communication, moral failure.”

They make molotov bombs before the complicit gaze of Colombian authorities
Bernal also denounced on Sunday that Venezuelan opposition groups, similar to the “guarimberos” that created violent protests in 2017, were on the Colombian-Venezuelan border ( temporarily closed since last Friday ), elaborating molotov bombs (homemade explosives). ) to use against Venezuelan troops, this before the complicit protection of the Colombian Police and  Army.

In this regard, he pointed out that despite the attacks on the Colombian side carried out since the morning hours, at the moment the border is in total peace. “Until now we can say that we breathe absolute peace and the border posts are under the custody of our Bolivarian National Armed Force,” he said. “We continue to denounce that we are the victims of a plan orchestrated by the United States. As you can see absolute tranquility, our civil defense lends to support anything, “he added.

In the Bloomberg video shown below, captured on Saturday, February 23, opposition groups are presented with armed Molotov bombs from the Colombian side of the Francisco de Paula Santander bridge, to be launched against the Venezuelan National Guard.

He recalled the two false positives on Saturday which were dismantled immediately:

With regard to the facts related to officials of the Colombian consulate, he said: “In the afternoon there was a strange event with diplomatic officials who could not pass on the Colombian side. They threw stones and molotov blocking them. ” The event ends when one of the consular officials made a call and let them pass. “These are the facts that account for the direct relationship of the Colombian government with paramilitary actors that are related to these acts of aggression against Venezuelan sovereignty.

Finally Freddy Bernal addressed the patriotic forces, to whom he congratulated them for their gallantry and encouraged them, in spite of the increasingly violent attacks, to maintain civic-military unity and thus guarantee victory.

Earlier, the Minister for Communication and Information, Jorge Rodríguez, denounced that the United States Government, in complicity with the Colombian president, Ivan Duque, in his forced attempt to enter the country a supposed “humanitarian aid” to justify a US military intervention. , they planned a big operation of false positives to attack Venezuela again.

From the Miraflores Palace, headquarters of the Executive, in Caracas, Rodriguez showed evidence of false positives perpetrated by right-wing leaders, under the orders of the administration of President Donald Trump, to destabilize the country.