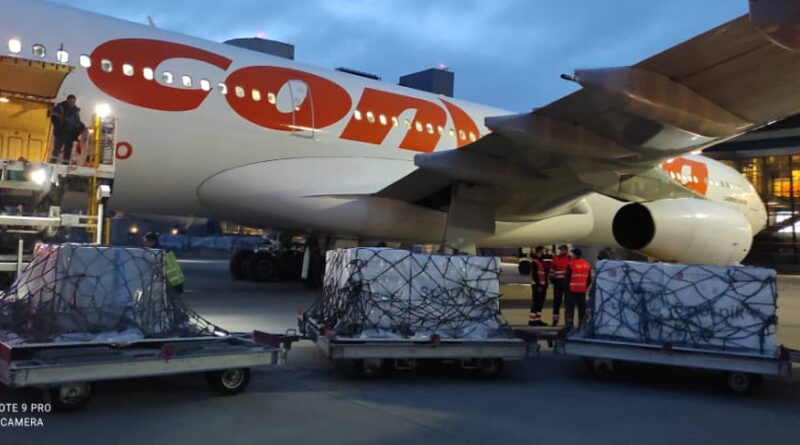 This Monday, May 3, the sixth shipment of Russian Sputnik V COVID-19 vaccines arrived in Venezuela, unloaded from a plane of national airline Conviasa that landed at Maiquetía Simón Bolívar International Airport, in the state of La Guaira. This sixth shipment contained 50,000 doses, and brings the total of doses in the hands of Venezuela’s government to 1.48 million doses, between China’s Vero Cell and the Russian Sputnik V.

In addition, the Ministry of Health announced an expansion of the Venezuelan immunization plan that began on February 18 with Sputnik V.

Venezuelan Minister of Health, Carlos Alvarado, personally received the sixth shipment, which will allow the country to complete the vaccination of professional healthcare workers.

“We are receiving 50,000 doses of Sputnik V, the safest vaccine so far,” stated Alvarado. “With this we reach 1.48 million doses in the country, and with that we can vaccinate healthcare personnel on the frontlines of the battle, on the second line, and in their entirety; about 360,000 people.”

Alvarado explained that the ministry will continue to prioritize the at-risk population throughout the country.

He announced that, thanks to popular organization, the most vulnerable people have been contacted and their vaccinations are guaranteed: “We are vaccinating adults over 60 years of age with two comorbidities, in addition to people with chronic diseases, and with kidney pathologies.”

“Patients with HIV and other diseases that make them vulnerable to the virus are also being prioritized,” added Alvarado.

“We are going to vaccinate personnel who have not stopped working during the entire quarantine, to ensure the continuity of their strategic work,” said Alvarado.

COVAX vaccines for July
On the other hand, the minister announced that “by July we will receive the first doses from the COVAX mechanism, is what we have been informed.”

The Bolivarian Government paid more than $10 million to acquire 11 million doses through COVAX.

“This will allow us to [continue] vaccination of more than 4 million people for free,” said the minister.

He also announced that “we are making all the agreements to meet the goal of vaccinating 22 million Venezuelans.”

With that, 70% of the population would be vaccinated, and the country could hope to achieve herd immunity.

In addition, the agreement with Cuba to produce the Abdala vaccine—the first Latin American vaccine to reach the third phase of tests—is advancing.

“We aspire to produce more than four million doses of this drug with the Cuban brothers, and we are adapting our plant and capacities,” Alvarado noted.

Safe and free vaccination
Likewise, the national airline Conviasa, blocked and sanctioned since February 2020 by the United States, continues to soar through the skies bringing humanitarian aid and vaccines to the people.

The third flight from Russia landed in Maiquetía on March 29 carrying 50,000 doses, and on April 14 the shipment was completed with the second doses of that batch.

On April 24, the fifth shipment of Russian vaccines arrived. This is part of an agreement to purchase 10 million doses of Sputnik V signed between Venezuela and Russia.

This sixth shipment completes the first phase of Venezuela’s strategic plan to guarantee an adequate supply of doses amid the campaign of vaccine hoarding, speculation, and inequality being waged by Northern countries.