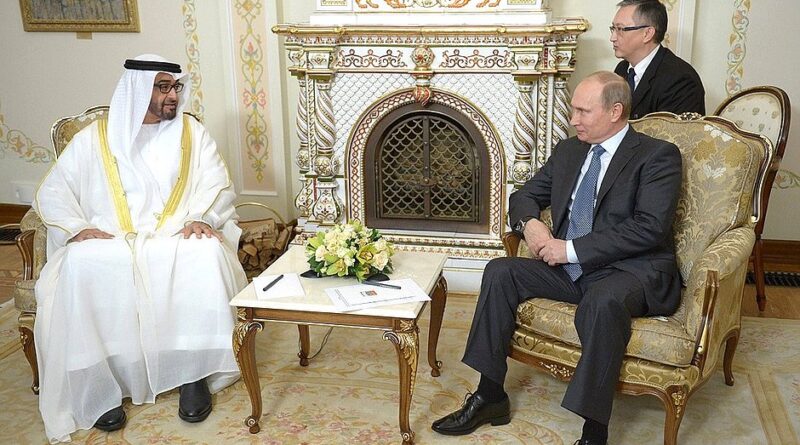 Gulf Arab regimes, and other developing countries, will adjust to a new world where power is shifting. It is no longer the world the US shaped after the Cold War

It is premature to determine the exact shape of the world in the wake of the Russian military intervention in the Ukraine. At the risk of repeating dreaded cliches, it is clear that the world order has been irrevocably altered. The post-cold war era is over, forever.

The US established global supremacy after the collapse of the USSR and ensured that NATO would form a security siege around Russia to keep it weak and vulnerable — to maintain American hegemony throughout the continent. Never has America been challenged in such a direct and focused way as by Russia’s intervention in Ukraine.

The old rules that the US imposed by force will be no more. While China has been cautious in expressing support for Russia in its official pronouncements, its media have been clear in refuting US propaganda claims. The reverberations of the cataclysmic event will be felt for years to come and will affect regional and international conflicts.

The impact of the Russian-Ukrainian war will also be felt in the Middle East, which has a long history of involvement in the Soviet, Russian and US rivalry.

Despite US pressure, no Arab states are participating in the economic war on Russia by imposing sanctions, joining most of Latin America and Africa, as well as Iran, India, Pakistan and China. Saudi Arabia and other Gulf states have resisted US pressure to pump more oil to make up for the US ban on Russian oil imports.

Most significantly, Riyadh is in talks with China to trade some of its oil in yuan, which would deal a blow to the US dollar that is used in 80 percent of world oil sales. Until now, the Saudis have exclusively used the dollar.

Moscow is trying to defeat the West’s ferocious economic assault on Russia by creating a separate economic and financial system with China. Arab nations could play an important part in it, effectively turning their backs on the US (In a sign of the Gulf’s coolness to Washington, The Wall Street Journal, for instance, reported that Emirati and Saudi leaders have refused to take Biden’s phone calls.)

The shape of international relations was shaken in 2011 with the passage of U.N. Security Council resolution 1973, which was limited to setting up a no-fly zone to protect civilians in Libya supposedly in danger of a massacre at the hands of Libyan leader Mu’ammar Qadhafi. (A British parliamentary report later found there were no such threats and was based on inaccurate intelligence and “erroneous assumptions.”)

The resolution did not permit ground forces to enter Libya. The language was clear. It said the Security Council:

“Decided to establish a ban on all flights in the airspace of the Libyan Arab Jamahiriya in order to help protect civilians. [and] Authorizes Member States that have notified the Secretary-General, acting nationally or through regional organizations or arrangements, and acting in cooperation with the Secretary-General, to take all necessary measures … to protect civilians and civilian populated areas under threat of attack in the Libyan Arab Jamahiriya, including Benghazi, while excluding a foreign occupation force of any form on any part of Libyan territory. ”

Despite these limitations, the US and NATO took the resolution to mean a license for NATO to overthrow a government that the US had long complained about. It didn’t matter that the Libyan dictatorial regime was cooperating with the US in the years leading up to its overthrow. Then US Secretary of State Hillary Clinton had even met the chief of Libya’s secret police, who happened to to be the ruler’s son.

Russia, ruled at the time by President Dmitry Medvedev, abstained on the resolution, as had China. Both countries had evidently believed the mission would be restricted to the non-fly zone. Vladimir Putin, who was prime minister at the time, was reportedly furious with Medvedev over the abstention.

After it became clear NATO was violating the resolution by overthrowing Qadhafi, China and Russia, both veto holders, were determined to change the course of the Security Council to prevent the US from again using it as cover for military interventions and regime change. The US started to lose its undisputed global supremacy at that point.

RELATED CONTENT: Narrative and Reality of the Libyan Crisis

Moscow and Beijing were both building up their military capabilities and were becoming more assertive on the international stage. Fearful of changes in the global configuration of power, the Biden administration incorporated strong language into its National Security Strategy (issued by successive administrations) to make clear US rejection of any competition from Russia and China. Biden’s strategy complained about Chinese assertiveness. (How dare any country but the US be assertive in the world?) It is one thing for the US to insist on global supremacy and another to guarantee it without a cost in blood and money.

Russia, in fact showed its assertiveness four years after the Libya resolution when Russia intervened to support the Syrian regime. Putin at the General Assembly asked the US to join Moscow in the fight, an offer the US rejected.

In the Middle East, the effects of the new global conflict have already reverberated within US client regimes, many of whom also have good relations with Russia. The United Arab Emirates (UAE) is one of those US clients. Washington supplies it with advanced military technology, (despite its abysmal human rights record). In return, the UAE works with the US, recently establishing a strong alliance with Israel. The US rewarded the UAE with the sale of advanced fighter jets.

And yet the UAE abstained on a March 3 Security Council resolution condemning Russia’s actions in Ukraine that was vetoed by Russia, while it voted in favor of a General Assembly resolution saying the same thing. Now the UAE, and especially Dubai, is being seen as a refuge for Russian billionaires who have been heavily sanctioned by the West.

Gulf countries like the UAE are caught between their complete loyalty to the US and their increasing closeness to the Russian government, especially as they lament what they regard as American retrenchment from the Middle East. Many Gulf despots are still unhappy that the US let Hosni Mubarak of Egypt and Zein Abidin Bin Ali on Tunisia fall during the 2011 Arab uprisings.

Only Qatar among the Gulf countries took a strong stance in support of Ukraine, but has not joined the economic war against Russia. Qatar’s emir was recently welcomed in the Oval Office and the country was awarded the status of “major non-NATO ally.” Furthermore, the US wants Qatar to fill the gap of Europe’s gas needs in the wake of sanctions on Russian gas sales (it is curious that the White House worked with Qatar on that before the first Russian soldier moved towards Ukraine.)

The US will no longer achieve a consensus in the world according to its own interests. While China is neither prepared, nor willing, to challenge US foreign policy head-on for now, its cooperation and treaties with US foes (Iran chiefly) is an indication that China is planning to operate in a world not subject to US dictates.

Chinese government statements during the crisis have been cautious, but social media in China and Chinese diplomats’ pronouncements via social media have been squarely sympathetic to the Russian stance. China has increased economic ties with Russia to soften the blow of the sanctions, including allowing Russia to use its UnionPay system to replace Western credit cards.

Russia’s ejection from the SWIFT international banking system has seen Russia rely on it own System for Transfer of Financial Messages (SPFS) and that may be linked to China’s Cross-Border Interbank Payment System (CIPS). Russia has begun making payments to China in renminbi, weakening the dollar as the world’s premier currency. The blowback effects on the West of its economic war is leading to separate economic and financial systems that is fracturing US global dominance.

Gulf regimes, and other developing countries, will adjust to a new world where the power configuration is changing. It is no longer the world the US shaped after the Cold War.

Russia doesn’t have America’s power or influence. But Russia is an influential regional actor; its role in Syria in support of the Syrian regime showed its ability to shore up a weak regime and to operate free of US plots to overthrow Bashar al-Assad. Gulf governments are already planning for a world in which the US is less militarily assertive than before. Toward that end, the UAE established its strong alliance with Israel.

Gulf regimes aren’t favored in Washington quite the same way Israel is. Israel followed the US, expressing support for Ukraine. It can’t afford to antagonize the Biden administration in the wake of the damage to its image during the Obama-Netanyahu era.

The Russian-Ukrainian crisis will undermine US and EU rhetoric on the Arab-Israeli conflict. It won’t be easy to sell the so-called peace-process after the West adamantly refusing to support diplomacy between Russia and Ukraine, while the US preaches strict pacifism for Arabs in the face of decades of Israeli occupation and aggression.

After the first two days of conflict, some 30 countries sent advanced missiles and arms to Ukraine and championed the right of resistance. Palestinians, on the other hand, are denied even the right to peaceful resistance. The US and Europe have gone so far as to ban BDS (boycott, sanctions, and divestment in Israel) while wielding sanctions around the world. How can Palestinians ever take seriously Western insistence that their struggle against occupation should never resort to violent means?

The world we live in is changing, and the Russian intervention in Ukraine will not be confined to Ukraine, or even to Europe. The US is learning that the world is slipping from its hands. It won’t tolerate it.

It will resort to force in its attempt to maintain its grip over humanity. Violent conflicts are very likely to now dominate our world.

As`ad AbuKhalil is a Lebanese-American professor of political science at California State University, Stanislaus. He is the author of the Historical Dictionary of Lebanon (1998), Bin Laden, Islam and America’s New War on Terrorism (2002) and The Battle for Saudi Arabia (2004). He tweets as @asadabukhalil