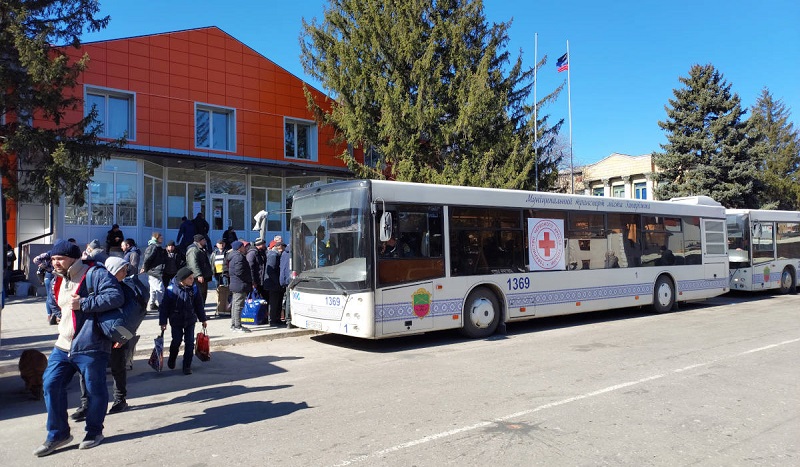 As the battle for Mariupol draws to a close and the Russian army and the DPR (Donetsk People’s Republic) people’s militia have now taken control of most of the city, civilians are evacuating en masse, and stories of the horrors committed by the fighters of the Azov regiment are multiplying.

Thus, on 23 March 2022, we went to Volodarskoye (renamed Nikolskoye by the post-Maidan Ukrainian authorities), where many civilians fleeing western and central Mariupol are sent to be registered and from where they can take buses to Berdiansk, Donetsk or Rostov.

While they wait in the check-in line or on the bus that will take them to their chosen destination, I talk to several of them. All of them confirm that the Azov fighters were evicting Mariupol civilians from their flats and using them as firing points. Worse, they were also setting up near the bomb shelters where women, children and elderly people were to shoot, knowing that they were putting the lives of these civilians in danger!

One woman also told us that the Azov fighters set up near a school to bomb the houses! She and her makeshift neighbor in the bomb shelter described the Azov fighters as real Nazis, explaining that they walked around with swastikas and other Nazi symbols clearly visible on them.

One man also told us how the Azov fighters took all the food that was still being sold to the residents of a neighborhood in Mariupol, leaving them with nothing to eat. He also reported that the families of Azov fighters are in bomb shelters in Mariupol’s metal factories, where they use civilians as slaves, who have to work for them to get some water.

See the report filmed in Volodarskoye, with French subtitles:

Several of these civilians confirmed that Azov fighters and Ukrainian army soldiers were not letting civilians out of Mariupol, using them as hostages and human shields.

One woman said that Ukrainian soldiers had fired on civilian cars trying to leave Mariupol, a testimony confirmed by another civilian who saw her car being targeted by Ukrainian units as she tried to flee the city, despite the fact that the word “Children” was prominently written on the vehicle. Her daughter was wounded by the gunfire.

Another civilian confirmed that Ukrainian soldiers were even shooting at children, and that they did nothing to help the civilians, who were only able to evacuate thanks to Russian soldiers.

Yesterday, the DPR flag was installed on top of the Mariupol municipal administration, and the head of the Republic, Denis Pushilin, went there with Russian deputies to deliver humanitarian aid, marking the takeover of the city.

According to the latest data, 80% of the city is now under the full control of Russian and DPR forces. The remaining fighters of the Azov Regiment have taken refuge in the USSR-designed bomb shelters in the industrial zones, which offer them a last refuge. Russian forces and the DPR people’s militia are eliminating them in these areas in order to complete the liberation of Mariupol. The battle of Marioupol should therefore be over in a few days, as Denis Pushilin had announced.

At present, more than 82,000 civilians have managed to evacuate Mariupol, and several thousand are fleeing every day, prompting the DPR Ministry of Emergency Situations to set up a heated tent city in Bezymennoye to accommodate the uninterrupted flow of refugees. The cars of civilians who have fled the town now line up in a long queue several kilometers from the entrance to the village.

On a more general level, the Russian army has communicated its new figures of military losses on both sides. The Russian army has announced that it has 1,351 dead soldiers and 3,825 wounded since the beginning of the special military operation in Ukraine. For its part, the Ukrainian army is said to have 14,000 irremediable losses (soldiers killed), and 16,000 soldiers wounded.

The Russian army also finally explained its tactical choice not to attack only in the Donbass to defend the DPR and the LPR. An explanation that is in line with my hypotheses on the reasons for this choice.
“The only way to help the Donetsk and Lugansk republics was to provide them with military assistance. Which Russia did. There were two options.

The first was to limit ourselves to the territory of the DPR and LPR within the administrative boundaries of the Donetsk and Lugansk regions, as provided for in the constitutions of the republics. But then we would be faced with a constant resupply of troops involved in the so-called joint forces operation by the Ukrainian authorities.

The second option was therefore chosen, involving action throughout the whole of Ukraine with demilitarization and denazification measures. The course of the operation confirmed the correctness of this decision,” the Russian Defense Ministry said.

After the battle of Mariupol, the two major battles to complete the liberation of the Donbass will be Slaviansk and Kramatorsk. And given the large number of Ukrainian soldiers gathered in these two cities, these battles unfortunately look like being potentially as terrible, if not more, than the one in Marioupol.