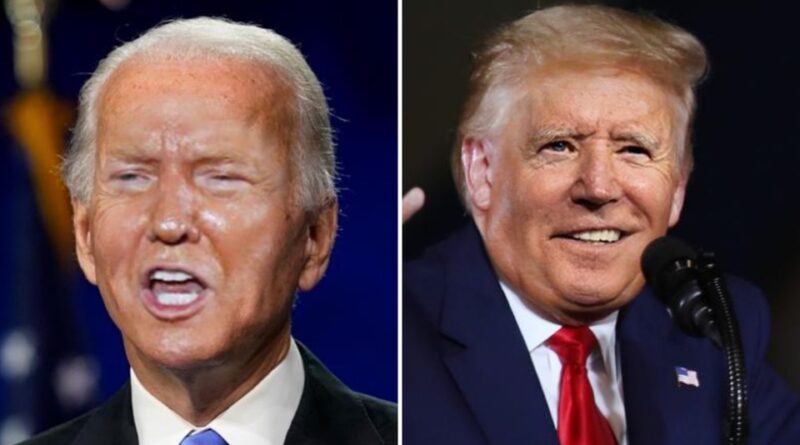 Nothing of significance has changed since Trump left office, apart from the narratives about how much things have changed.

The wars are still going. Washington is still the hub of an oligarchic globe-spanning empire. Americans are still being impoverished and propagandized into political impotence by an unfathomably wealthy plutocracy. Sanctions are still squeezing people to death in Venezuela, Syria, Iran and North Korea. The world’s worst mass atrocity is still continuing in Yemen. The kids are still in cages. Authoritarian creep continues to metastasize. All the old abuses roll on completely uninterrupted, along the same trajectories they were on before.

If you were to take the entire US-centralized power structure and assess its overall behavior as a whole, you would find that the actual behavioral changes amount to the tiniest fraction of a single percentile of the total. If you’d just been analyzing the raw data without looking at the news stories, you’d see that the money, troops, weapons and resources have continued to move in more or less the same ways after January 20th as they were moving before.

What has changed is the narratives, the stories that Americans are being fed by those who are responsible for controlling the way people think, act, organize, and vote. If you are a Democrat, you have been hearing that the country is now a thousand percent better without the Orange Menace in charge. If you are a Republican, you’ve been hearing that it’s a thousand percent worse. In reality, in terms of the overall operation of the empire both domestically and internationally, hardly anything of significance has changed apart from the narrative overlay.

RELATED CONTENT: The President has not Ended the War on Yemen; Congress Must do so

“A growing body of research tracked the detrimental impacts of Trump-related stress on broad segments of the American population, from young adults to women, to racial and LGBT communities.” @jaredbkeller on the biological response to living under Trump. https://t.co/4Uo33zWeuH

Which is not to say that nothing of significance has changed. It is significant that US liberals are no longer being psychologically pummelled with hysterical narratives about a looming fascist takeover and their government being infiltrated at its highest levels by Kremlin operatives. This relentless barrage of emotional intensity has been literally making people sick, and the fact that they are no longer being psychologically abused in this way is not insignificant.

So the actual US empire is chugging along in essentially the same way it was before Trump left office, but people’s actual quality of life is different anyway, simply because they are being fed different narratives by the mass media. They truly feel inside as though they are living in a very different America now than they were prior to January 20th, even though as far as the real world is concerned they most certainly are not.

And this is just such a perfect illustration of how pervasively human consciousness is dominated by mental narrative.

So much of our society is made out of mental stories in our heads. Identity, language, etiquette, social roles, opinions, ideology, religion, ethnicity, philosophy, agendas, rules, laws, money, economics, jobs, hierarchies, politics, government–these are all made-up conceptual constructs with no existence in the physical world, no existence outside our shared stories we’ve come to collectively regard as true.

Our society is made up of collective narratives, and our experience is dominated by mental narrative as well. The majority of most people’s interest and attention from moment to moment goes not to the raw data their senses are feeding their brains about the material world, but to thought. To mental chatter about a “me” character (which is itself ultimately just another conceptual construct) and all its adventures real and imagined, what it wants and what it doesn’t want, who has wronged it and who has won its approval. For most people, present-moment awareness of their actual surroundings is largely eclipsed by mental narrative the majority of the time.

The Real World And The Narrative World

We each inhabit two very different worlds simultaneously: the real world, and the narrative world. Manipulators exploit the differences between these worlds to trade narrative-world currency for real-world resources.https://t.co/CyfulfIsLt

So both externally and internally, human life is dominated by narrative to a truly massive extent. Is it any wonder, then, that the cleverest and greediest of humans expend so much effort working to determine what our society’s dominant narratives will be?

From news media propaganda to Hollywood to internet censorship to government secrecy to think tanks to Bellingcat to Wikipedia entries, vast fortunes are continuously poured into controlling the dominant worldwide narratives by the power structures who benefit from them. This narrative management campaign is so far-reaching and ubiquitous that even highly intelligent people are swept up in its manipulations, simply because they are receiving the same narratives from so many different sources and receive insufficient contradictory input to create doubt in them.

The dominant narratives all tell us the same few things over and over again. Capitalism is working great. Your government is your friend. The governments who oppose your government are bad. The so-called “liberal world order” is a planetary status quo of nonstop murderous imperialism, exploitative neoliberalism and ecocidal capitalism running underneath a propaganda soundtrack babbling endlessly about how everything is fine and it’s going to get better any minute now.

And it’s all lies, half-truths and distortions. The status quo is killing, oppressing and exploiting human beings all around the world while rapidly destroying our ecosystem and putting us on an increasingly dangerous collision course with nuclear war. We will transcend our enslavement to mental narrative and evolve into a mature species with a mature relationship with its recently evolved capacity for abstract thought, or we will continue on our self-destructive trajectory until we meet an unpleasant end.