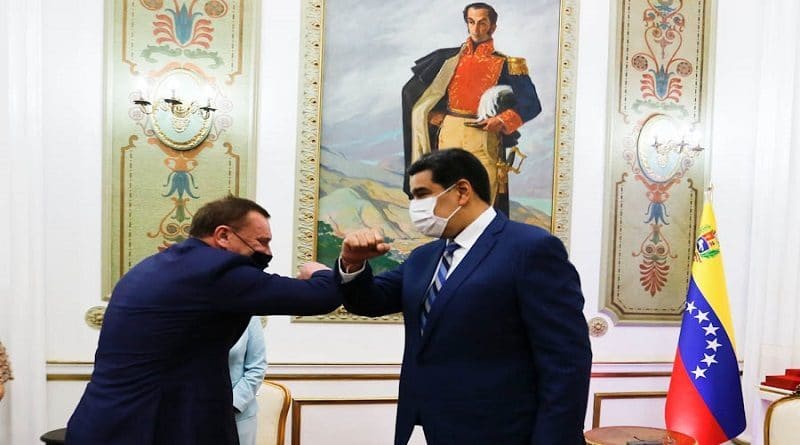 This Tuesday, March 30, the Vice President of the Russian Federation, Yuri Borisov, paid a high-level visit to Venezuela to strengthen the ties of friendship between the two nations. Russia’s high-ranking official highlighted cooperation and solidarity as vital.

In addition, new agreements were signed to accelerate the bilateral agenda for mutual benefit. “We have taken the opportunity to sign new alliances in energy, mining, and health sectors for the development of both economies,” said Borisov.

In the same way, they explained that in the face of the new challenges of the pandemic, cooperation and solidarity will be decisive. “We made many agreements in culture, sports, health, energy, and food, such as the 600 thousand tons of wheat imported from Moscow.”

Venezuelan Vice President for Economy, Tareck El Aissami, signed the documents on behalf of the Bolivarian Government. “More than diplomatic relations, we have a brotherhood with cooperation and solidarity in the face of the challenges of neoliberalism,” said El Aissami.

More vaccines for Venezuela
One of the strategic issues addressed at the meeting was the contribution that Russia has made to Venezuela with its vaccines.

“We have three vaccines, and Sputnik V and EpiVacCorona are already in Venezuela,” said Borisov. “We are going to accelerate delivery in the coming months.”

They also assessed that “now as never before in 66 years of bilateral relations, the two peoples have come closer.”

El Aissami also explained that “thanks to Commander Hugo Chávez 22 years ago, new paths of cooperation with Russia were opened.” In addition, on behalf of President Nicolás Maduro, he thanked dignitary Vladimir Putin for his solidarity with Venezuela.

“More vaccines will arrive from Russia, which are the most effective against COVID-19 and will save millions of lives,” said El Aissami.

United against imperialism
Similarly, Borisov condemned “United States sanctions and blockades that have made the Venezuelan people suffer.” For this reason, they have pledged to advance the agenda against tax policies, and Russia promised “to continue supporting Venezuela at all levels.” The new agreements signed are “on outer space, and air connection between Caracas and Moscow for the month of April.”

Borisov’s agenda will be intense during his visit to the 15th meeting of the Binational Strategic Commission. It is estimated that more agreements will be signed and more meetings will be held between the Russian delegation and the highest Venezuelan authorities.

President Maduro confirmed that a second Russian-made COVID-19 vaccine, EpiVacCorona, will arrive in Venezuela in its testing phase, and for later use.

“Agreements will be signed for the acquisition of a new 100% effective and powerful vaccine, the EpiVacCorona,” the Venezuelan President stressed.

Likewise, 12 cooperation agreements or legal instruments were signed in sectors such as energy, oil and food, finance, defense, and health, for the shipment of supplies and medicines to treat COVID-19 patients.