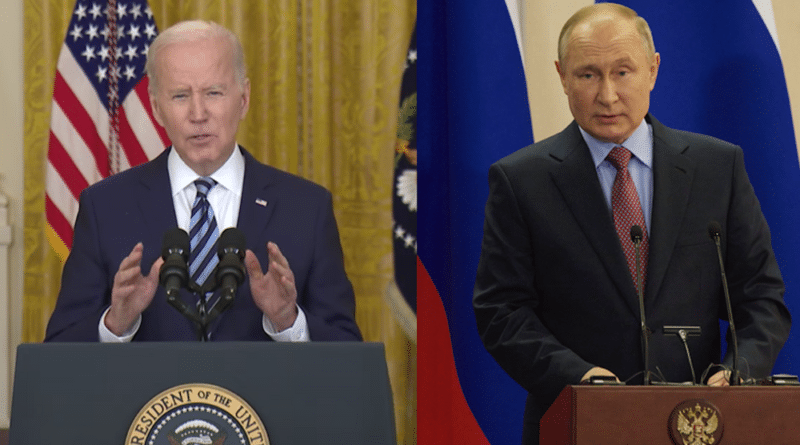 Wrong does not really cover it. I was naive. Naively, I convinced myself that Russian President Vladimir Putin would not launch a massive military offensive against all parts of Ukraine.

I allowed myself to believe that the extent of an attack would be limited to seizing territory contested between Ukraine and the breakaway republics of Donetsk and Luhansk in eastern Ukraine. But Putin and Russian military officials opted to no longer show restraint in the face of the United States and the North Atlantic Treaty Organization (NATO) military alliance.

The most painful part may be that the “Russia plans,” which Secretary of State Antony Blinken outlined before the United Nations Security Council, mostly unfolded. Russia levied multiple accusations against the Ukrainian government. A proclamation came in the form of recognizing the breakaway republics in the Donbas region. Not long after, Russian missiles and bombs were dropped. Communications were jammed. Cyber attacks were launched, and some Russian tanks and soldiers advanced on cities within Ukraine, including Kiev.

Over many weeks, U.S. intelligence officials frequently claimed there would be an “imminent” attack, even providing dates. Those dates came and went and nothing happened. It seemed officials would be wrong, and yet as Russia presumably held off on invading, there was little space for diplomacy to avoid further conflict because of the constant pronouncements from Western countries that an attack was all but certain.

The focus on intelligence claims, in other words, reinforced an escalation on the U.S.-NATO side in preparation for war with Russia and supplanted the efforts of countries like France and Germany to hold negotiations with leaders from Russia, Ukraine, and various NATO members. U.S. officials also kept Russia’s long-held grievances against NATO out of any so-called “good faith efforts” to avert war.

RELATED CONTENT: How the US Instigated the Ukraine Crisis

While Russian military aircraft entered Ukrainian airspace, I shared an excerpt from a column that the distinguished U.S. foreign policymaker and historian George Kennan wrote in 1997, where he warned“expanding NATO would be the most fateful error of American policy in the entire post-Cold War era.” (Credit is owed to journalist Spencer Ackerman for highlighting Kennan’s words days earlier.)

“Such a decision may be expected to inflame the nationalistic, anti-Western, and militaristic tendencies in Russian opinion; to have an adverse effect on the development of Russian democracy; to restore the atmosphere of the Cold War to East-West relations, and to impel Russian foreign policy in directions decidedly not to our liking,” Kennan added.

Everything Kennan feared appears to have occurred over the past 25 years.

President Joe Biden has embraced Washington policymakers, who are aligned with the Pentagon and believe in “Great Power competition” with Russia (and China). This has restored a Cold War atmosphere.

What Happened In Maidan
From the annexation of Crimea to the conflict in Syria to support for Alexander Lukashenko in Belarus, Putin’s foreign policy has been decidedly not to the liking of the Blob, or D.C.’s foreign policy establishment.

Extremely relevant to the conflict unfolding is the Maidan Revolution, or coup, which occurred in Ukraine in 2014. If you ask Western pundits, it was not a coup that overthrew Ukraine Viktor Yanukovych. Calling it a coup is Russian disinformation.

Bryce Greene summarized the following for Fairness and Accuracy in Reporting (FAIR):

In Ukraine, the IMF had long planned to implement a series of economic reforms to make the country more attractive to investors. These included cutting wage controls (i.e., lowering wages), “reform[ing] and reduc[ing]” health and education sectors (which made up the bulk of employment in Ukraine), and cutting natural gas subsidies to Ukrainian citizens that made energy affordable to the general public. Coup plotters like US Assistant Secretary of State Victoria Nuland repeatedly stressed the need for the Ukrainian government to enact the “necessary” reforms.

In 2013, after early steps to integrate with the West, Ukrainian President Viktor Yanukovych turned against these changes and ended trade integration talks with the European Union. Months before his overthrow, he restarted economic negotiations with Russia, in a major snub to the Western economic sphere. By then, the nationalist protests were heating up that would go on to topple his government.

Ivan Katchanovski, a University of Ottawa political scientist from Ukraine, also wrote a column published by Truthout on February 16, “Lies About Ukraine Conflict Are Standing in the Way of a Peaceful Resolution.”

Western governments and the establishment news media maintain “the pro-Russian government in Ukraine was ousted as result of peaceful mass Euromaidan protests in February 2014 and that President Viktor Yanukovych fled Ukraine because he ordered the massacre of the peaceful Maidan protesters by government forces,” Katchanovski recalled.

“These protests took place on the main square in Kiev, which is called Maidan, and they were directed against the Yanukovych government and his decision to suspend signing the EU association and free trade agreement.”

Katchanovski continued, “This mass killing of the Maidan movement’s own supporters — perpetrated by the oligarchic and far right elements of the Maidan alliance — made it possible for Maidan leaders to falsely blame the pro-Russian Yanukovych government and its police and security forces for the killing and then seize power in Ukraine. Western governments backed this undemocratic overthrow of the democratically elected Ukrainian government.”

Since the massacre in Maidan, Ukraine has had a problem with neo-Nazi groups, including the Azov Battalion, which was recently featured in news broadcasts showing Ukrainian grandmothers being trained to shoot rifles.

This neo-Nazi problem, which existed before the Maidan coup, was recognized by various media outlets prior to the run-up to Russia’s invasion, including the Jewish Daily Forward, Reuters, the USA Today, and the Daily Beast. However, as of February, it is considered surreal or a kind of Putin pretext to mention any threat neo-Nazis or far right groups may pose to Russia.

Additionally, the CIA trained paramilitary forces in Ukraine to act as an insurgency if there was an invasion, which was well-known to Russia.

The Arrogance Of US Officials

Katrina vanden Heuvel, the editorial director for The Nation, wrote the magazine’s response to Russia’s attack on Ukraine. “Putin’s actions are indefensible, but responsibility for this crisis is widely shared.”

“This magazine has warned repeatedly that the extension of NATO to Russia’s borders would inevitably produce a fierce reaction,” vanden Heuvel stated. “We have criticized NATO’s wholesale rejection of Russia’s security proposals. We decry the arrogance that leads US officials to assert that we have the right to do what we wish across the world, even in areas, like Ukraine, that are far more important to others than they are to us.”

Vanden Heuvel added, “What is needed is not a rush to arms and to hawkish bluster but a return to intense negotiations—at the UN, at the OSCE [Organization for Security and Cooperation in Europe], and among the signatories to the Minsk Protocols.” (Minsk was a ceasefire agreement in the Donbas that was not really enforced.)

“To President Biden, we say: American interests in Ukraine will never outweigh those of Russia; the US and NATO cannot and will not win a war on the ground against Russia in its own backyard; sanctions are unlikely to prevail and may indeed damage the American economy.”

With Russia entering the second day of their offensive, Biden is deploying 7,000 more troops to Europe. Biden said he will not be talking with Putin and proclaimed, “Putin is the aggressor. Putin chose this war, and now he and his country will bear the consequences.”

Biden unveiled a set of harsh sanctions designed to cripple the Russian economy. The press was informed that the sanctions will have a “long-term impact.” Yet virtually all the reporters still asked Biden why the sanctions did not go far enough and why there are no immediate plans for military retaliation on the part of US and NATO.

We are in a profoundly bleak moment. What world leader will show the courage to reach out to Putin and offer him some incentives to end this military action? Who will consider whether any of these punitive measures are appropriate for restoring peace? How will those opposed to war find the space not only in Russia but in the US and around the world to protest?

Americans won’t find any voices of dissent in Congress. Most US citizens who articulate a position that opposes but contextualizes and seeks to understand Russia’s actions will find themselves hounded on social media for expressing these views—no matter which news sources or foreign policy scholarship they share to support their perspective.

Biden and the Democrats remain convinced that Hillary Clinton lost her presidential campaign in 2016 because Putin interfered in the election. They have never accepted responsibility for how they boosted Trump (see the “Pied Piper” memo) or the errors they committed in states like Michigan and Wisconsin. They undoubtedly see Putin storming Ukraine and feel the desire for even greater revenge following the destruction of Ukraine’s military infrastructure.

Routinely, the US government draws red lines while insisting to the world that adversarial powers are not allowed to enforce their own.

So we find ourselves in an intractable clash between Russia and the US/NATO military alliance. Caught in the crossfire is Ukraine, a nation of 44 million people, who will bear the ultimate costs of war.

And beyond Ukraine the lower classes in Russia, Europe, and the US will be asked to pay the price for foreign policy hawks, who are blinded by their imperial ambitions and too often make wars inevitable.

Kevin Gosztola, managing editor of Shadowproof, host of the “Dissenter Weekly,” co-host of the podcast “Unauthorized Disclosure,” and member of Society of Professional Journalists (SPJ)