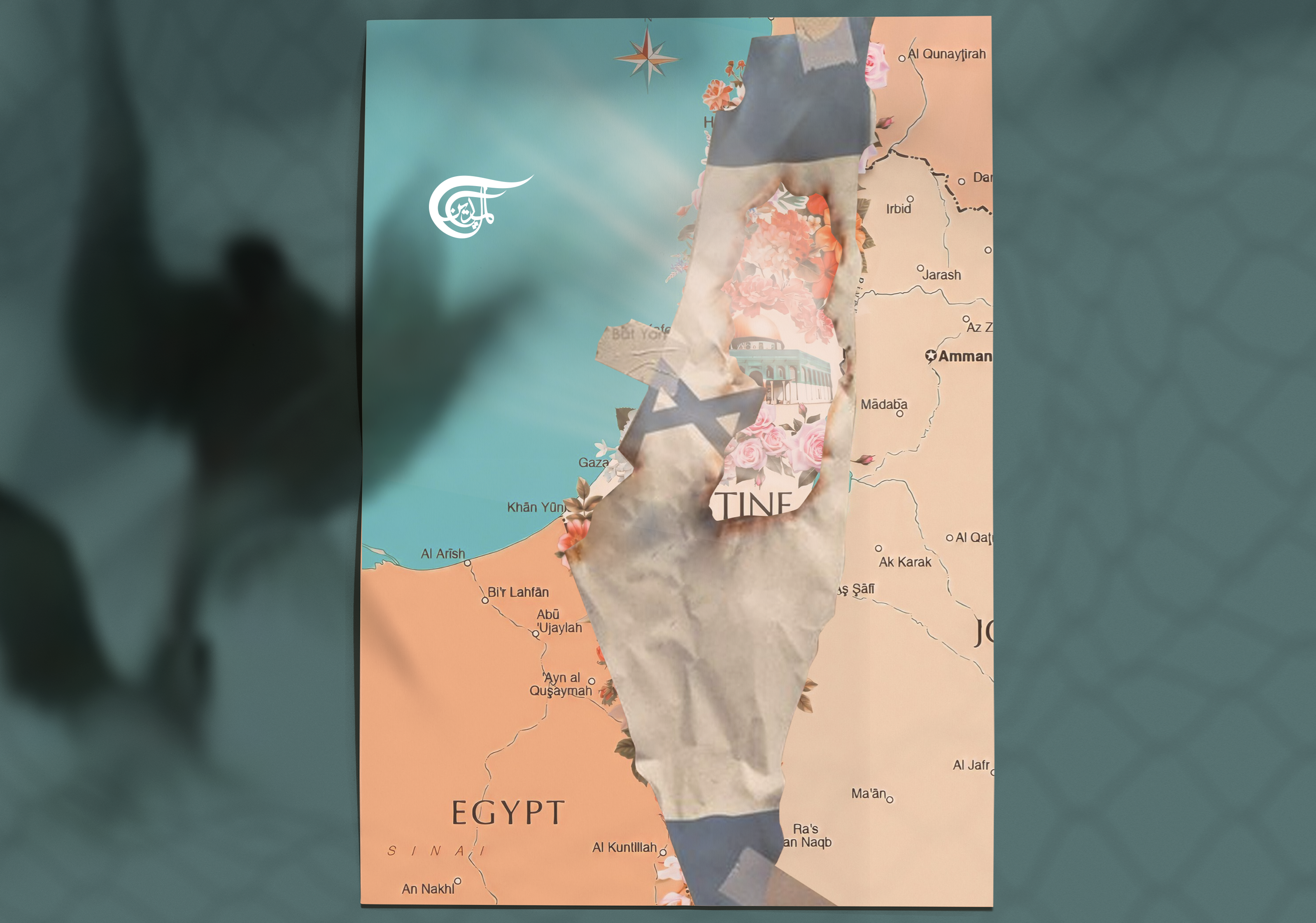 The flag of the zionist regime covers Palestine's beauty.

We have a date with history and it is the liberation of Palestine today in the XXI century against the colonial yoke and anachronism called “Israel”.

Zionism is a eurocentric fascist movement and today it is the engine of imperial inhumanity and is the very normalization of fascism. Zionism is an enemy of humanity that with its despotic supra-power allows it to mock and subjugate the world as the untouchable bearer of Peace.

Zionism operates among rivals, i.e. there is American Zionism and there is Russian Zionism, and there is Chinese Zionism. There is Zionism in its fascist nature and there is also Zionism operating on the left wing. There is Nazi Christian Zionism as well as Islamo-fascist Zionism and at the same time, it operates in the illustrious temple of art, academia and intellectualism: in multiple cases in the scientific and technological plunder, always in the financial, commercial and media mafia. Its hyper-realistic power seems surrealistic.

For decades Zionism has been one of the great articulators of the West in the macabre spilling of the blood of the peoples of Africa and Latin America for the plundering of their natural resources.

In 1948, the Euro-Zionist movement succeeded in imposing a colonial regime in Palestine called “Israel”. It was imposed on the basis of ethnic cleansing against the native Semitic Palestinian people. The wounded Arab world protested and the international Zionist power managed to conceal its barbarism, stating that they were Arab savages, anti-Semitic Muslims… Zionism is the perfect crime, the victim is guilty. Western egocentric gluttony ejaculates in its creative and illustrative ignorance: They found the land of love, sang Edith Piaf in tribute to the colonial regime of “Israel” that massacred the native Semitic Palestinian people.

Note:
“Israel” that was imposed in 1948 in Palestine is a classic colonialism, a colonial anachronism and its parallelism with the classic colonialism is that it does not come from a country but from a European movement (Zionism), which seeks to create a nation-state. In this case, they use the Jewish religious doctrine (Semitic heritage), they falsify history, they allege that it is about the ”return” to the ancestral land (Indo-Europeans, non-Semitic Jews). And this is why we are facing a colonialism in which it does not only colonize the land of the people but steals, appropriates the history of the native people, and this is because it is a colonialism that does not come from a country but from a movement that seeks to be a country. Therefore it takes the history of the native people. “Israelis” are not “Israelites”. This colonial particularity of usurping the native Palestinian history, culinary and cultural expression, is part of the equation of extermination of the Palestinian people. The native Palestinians are not only expelled from their homeland but the enemy seeks to expel them from history.
End of the note

It is worrying to see today, how the tyrannies, neocolonial Arab monarchies, in order to perpetuate themselves in power, are investing colossal sums of money in the falsification of Islam, in school education, in large international Islamic forums, to present this colonialism as an Islamic principle. Be careful with this.

Behind the cruel US imperial invasion of Iraq was the colonial regime of “Israel”, through the Zionist Lobby, as part of the colonial expansionist project: “Greater Israel”, from the Nile to the Euphrates.

Today, the colonial regime of “Israel” is in possession of at least 400 atomic bombs.

The humiliating Oslo Accords in which a Palestinian elite groveled and were forced to abandon the armed struggle. By abandoning the armed struggle, much of the Palestinian imaginary was lost, we no longer speak of the Fida’i. It used to be said: To be against “Israel” is not to be against the Jews. It is now said: To criticize “Israel” does not mean to be against “Israel”. Without realizing it, we are becoming Zionists. It is criminally naïve to believe in the existence of this colonialism.

Former Palestinian leaders gave up the armed struggle for the peaceful struggle that already existed, but a peaceful struggle has not been achieved either, since Western repression does not allow us to express freely or to express the essence of the Palestinian Cause. We have not positioned our own lexicon, under the pretext that we must be intelligent, strategic, objective, subtle, tactical. Although the Palestinians have become more visible in the world, this has not stopped Zionism from advancing its ethnic cleansing in order to make the Palestinian people disappear.

Yes, war is perverse, but pacifism, in some cases of a petty bourgeois humanism, demagogic and in other honest cases, has proved not to be enough to fight the most powerful fascism of today; on the contrary, it has facilitated its advance. Zionism scoffs at all the great denunciations made by great institutions of the world including the UN. We are contemplating history instead of provoking history.

No one has the right to impose which is the way to resist, the peaceful or the armed struggle, both are valid. Another element is to impose on us to recognize Israeli colonialism as an alternative for Peace. That is a trap. As a native Palestinian of the Diaspora, I do not recognize colonial despotism. The solution is Palestinian independence. Never expel any so-called Israeli, they were born there, that is their land, that is Palestine.

Israeli colonialism is not limited to Palestine but to the rest of the Arab-Persian and Kurdish countries.

We have a date with history and it is the liberation of Palestine today in the XXI century against the colonial yoke and anachronism called “Israel”. We have a debt to Humanity and that is to extirpate colonialism from our contemporary history and to extirpate the most powerful fascism of our time. It sounds lovely to say this, the challenge is immense, we must stop self-censorship, under the pretext that we must be strategic. We must kick the table, educating the world about the just Palestinian cause and the danger that Zionism poses to humanity. That embarks deep determination and steadfastness, therein lies the beauty of being Palestinian. From our Diaspora they will come for us to ruin our lives, but to liberate Palestine is the liberation of the world. A more dignified and noble world is mandatory.