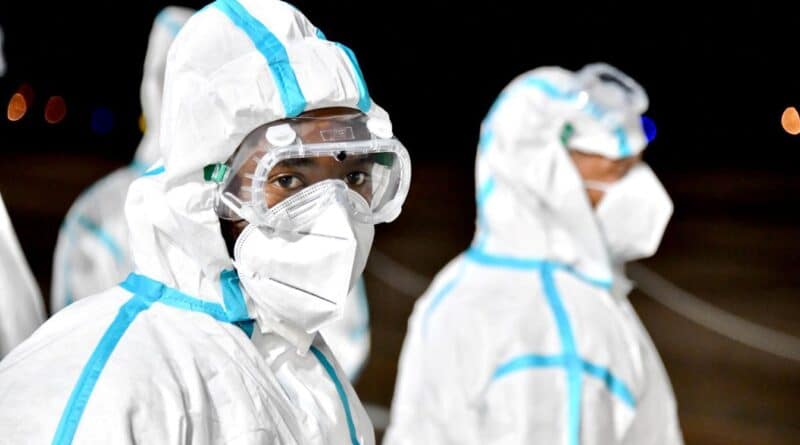 While the rate of infections and deaths due to COVID-19 continue to grow in the United States, with even the President and his wife now becoming infected, the small country of Cuba is making remarkable strides in combating the virus at home as well as throughout the world. For those reasons, the Washington State Labor Council (WSLC) and the Martin Luther King, Jr. Labor Council (MLK Labor) passed resolutions calling for US-Cuba collaboration in the fight against COVID-19.

On September 25, the WSLC State Convention passed their resolution with overwhelming support from the over 175 delegates in attendance calling on “he Congress of the United States and the President to lift restrictions on access to Cuban medical expertise, including clinical trials of Interferon alpha-2B recombinant (an antiviral medication), in order to more effectively combat the COVID-19 pandemic and to save lives.” The WSLC became the first state labor council in the U.S. to pass such a resolution. The resolution was put forth by the three AFL-CIO labor constituencies of color of the WSLC – Asian Pacific American Labor Alliance (APALA), A. Philip Randolph Institute (APRI), and the Coalition of Black Trade Unionists. The Martin Luther King, Jr. Labor Council had passed a similar resolution earlier and forwarded it to this convention.

In presenting the resolution to the WSLC delegates, Gabriel Prawl, President of APRI, Seattle called for “All hands to be on deck to save lives … and move to end COVID-19 and allow people to have an opportunity to live longer. In supporting this resolution, this puts us on the right path of history.” The WSLC represents more than 600 union locals and councils with approximately 550,000 rank-and-file union members throughout the state of Washington. The AFL-CIO nationwide represents more than 12 million active and retired workers in the U.S.

RELATED CONTENT: US’ Failure to Recognize Cuba’s Medical Efforts During Covid is due to an Innate Fear of Linking Socialism With Anything Positive

Cuba’s success in fighting COVID-19 is evidenced by their low rate of infections and COVID-19 related deaths. Currently, Cuba has a lower infection rate than most countries in the northern hemisphere and Cubans are 42 times less likely to contract the virus than people in the U.S. Cuba’s healthcare system, with an integrated community-based public health and medical care approach, has proven in this time of the pandemic to be effective in identifying, treating, and containing COVID-19. Prevention is a hallmark of Cuba’s healthcare system and provides the population with nationwide televised education programs on COVID-19, including safe measures to take and immune bolstering homeopathic medications. Cuba’s medical system is also bolstered greatly by a robust biopharmaceutical industry which allows for the development and distribution of medications to its population.

Interferon alpha-2b recombinant, mentioned in the WSLC resolution, is one of the many antiviral medications developed by Cuba, and is utilized to bolster the immune system in some of the most severe COVID-19 cases. It has been used in Italy and China where Cuban medical personnel were dispatched at the height of the pandemic. Both medical treatment and pharmaceuticals are provided free to Cuba’s population.

Recently, an international campaign was launched petitioning the Nobel Peace Prize Committee to award Cuba’s Henry Reeve International Medical Brigade for their role internationally in fighting COVID-19. The Brigade of Cuban healthcare professionals who have vowed to serve wherever needed is currently working in over 35 countries. These healthcare teams include doctors, nurses, researchers, public health experts. They bring with them medications including Interferon alpha-2b recombinant and other immune strengthening medications developed by the Cuban biopharmaceutical industry. Many members of the Henry Reeve Brigades have previously served in other countries dealing with HIV-AIDS, hepatitis types B and C, SARS, and dengue viruses. The Henry Reeves Brigade is renowned for the key role it played combating the deadly disease Ebola in West Africa.

Upon the resolution’s passage, Karen Strickland, President of American Federation of Teachers – Washington (AFT), who has traveled to Cuba with US Women and Cuba Collaboration, stated, “I have supported an end to the embargo against Cuba for humanitarian reasons for nearly 20 years. In this moment, it is abundantly clear that the Cuban people are not the only people harmed by the embargo. Cuba has much to offer to the U.S. but the stubbornness of politicians has cheated us out of the benefits of collaboration with Cuba.” AFT was also a sponsor of the WSLC resolution.

The resolution calling for US-Cuba collaboration in the fight against COVID-19 was first brought forth by APALA and, according to Seattle Chapter President Eunice How, “Was the most logical step following the passage of a resolution passed at our 2019 National Convention supporting lifting the 60 year-old U.S. blockade against Cuba. We must do all we can and work with all to save lives in this pandemic. We owe it to all working people.”

Cindy Domingo, member of Seattle APALA Executive Committee and Chair of US Women and Cuba Collaboration, spearheaded the work on the resolution as part of the Saving Lives Campaign in the U.S. http://savinglives.us-cubanormalization.org/

To sign the petition to nominate the Henry Reeve Brigade for the Nobel Peace Prize go to: https://www.cubanobel.org/