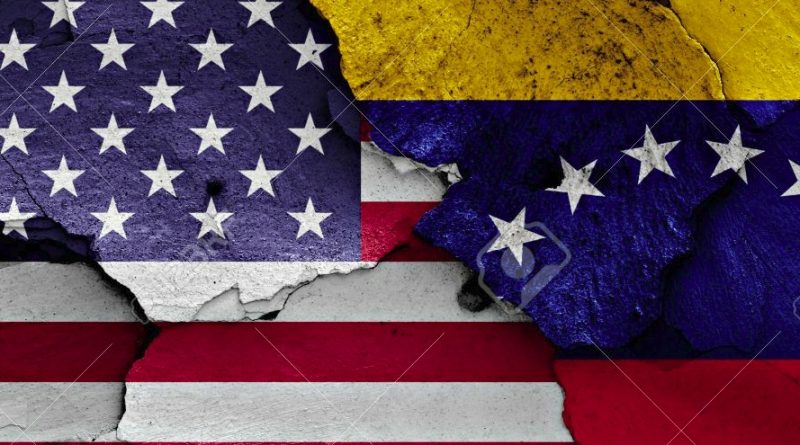 We are witnessing one of the biggest acts of terrorism, not only economic but of all kinds, on behalf of the United States in its war against Venezuela. Because this is what the criminal freezing of the South American country’s assets in U.S. territory is about, suffocating its population and government amidst an imperial offensive boosted since last January 23rd following another failed coup attempt.

The economic, financial and commercial blockade adds up to these measures, deeply affecting all Venezuelans to the point of causing deaths due to the scarcity not only of food and other staples but also of medicines, violating the human rights and the rights of the population.

Coercive measures against government officials, several attempts to murder the President and even important leaders and members of Cabinet, soldiers and peasants —as it happened recently in Barinas with the participation of Colombian paramilitaries contracted as mercenaries— show that they are trying to infiltrate and occupy part of the territory as they did in Libya or Syria. This is another phase in its attempts to invade that country as they try to convince their allies.

Another escalation was about “sanctions” against Local Production and Distribution Committees (CLAPs), a government’s program aimed at providing direct house to house food distribution to communities based on evaluated needs. Thus sanction violates all international and humanitarian law, the same as sabotages that left parts of the country without electricity.

Venezuelan journalist and writer Earle Herrera warned that the U.S. operation against the CLAP is called “saturation and asphyxia” and he exposed that ARIES II EP-3 electronic espionage aircrafts are tracking the distribution routes of the “dangerous” boxes full of food. “By land, Brazil and Colombia are closing the border against them. By sea, shipping firms that bring the products are sanctioned. And by the cyberspace and radio spectrum, they are endlessly bombing Venezuela with fake news. This is not the Normandy landing. But come on!”

Besides authorizing sanctions against the countries that deal with the Venezuelan Government, such as Russia and China, and above all, the Executive Order that handed over the oil company CITGO to opposition leader Juan Guaido. This is not an insignificant point since he could not take possession of the company as Trump had decided because a U.S. court established that CITGO should be used to pay a debt of the Venezuelan Government to another company.

Through this Executive Order, blocking all properties of the Venezuelan Government, the United States is taking over CITGO amidst another evident violation of international laws and an action of piracy and theft agreed upon by European countries for the disgrace of their people and the world.

“This is the first time in 30 years that we are imposing a freeze on the assets of a government in this hemisphere… It worked in Panama (1998), it worked in Nicaragua once (1985) and it will work there again. It will also work in Venezuela and Cuba,” stated national security adviser John Bolton —one of the greatest U.S. extremists— in Lima, Peru, another country filled with U.S. bases, troops and military facilities.

The Panama issue is important for those who believed the story about the invading of that country in 1989 was against Gen. Manuel Noriega or for those who seem to not understand that there is a threat to invade Nicaragua as they did so many times before. Meanwhile, some intellectuals claiming to be leftist align with Washington because they do not want to see the truth in their Europeanist mirrors and are ignoring the coup d’état attempted in 2018 —funded, advised and headed by the U.S., as is well documented.

Measures against Venezuela, moreover, come at a moment when the talks between the Nicolas Maduro Administration and the opposition advanced in Barbados thanks to Norway’s mediation. Guaido as chief of the National Assembly welcomed the new measures, considered by President Maduro as “a serious and brutal aggression executed continuously and effectively by the Trump Administration against Venezuela,” he decided to suspend the dialog. Washington has hindered all processes of that dialog so far.

Meanwhile, Guaido headed an event in Caracas accusing President Maduro of being “responsible” for the shortages of electricity, water, food, everything. “If you are so interested in Venezuela, leave Miraflores (the Presidential Palace),” he said and commented that this brutal embargo is “a day of achievements” in the struggle for Venezuela.

This all occurs with the connivance of European countries and regional lackeys, accepting the set up by Trump and his advisors —which has become a tragic sketch of their policy against Venezuela and the world.

For the disgrace of Latin America, the completely biased report prepared by the United Nations High Commissioner on Human Rights, Chilean Michelle Bachelet, for the Human Rights Council in Geneva, warns among other issues —evidently aimed at aiding the United States to increase its actions against Venezuela— that since 2016 “the Maduro regime and its institutions” have undertaken a strategy “aimed at neutralizing, repressing and criminalizing the political opposition and those who criticize the Government,” urging the President to adopt measures to “stop and remediate the serious violations to economic, social, civil, political and cultural rights.”

Could Mrs. Bachelet been able to stand up in the middle of a square in Santiago de Chile to say what Guaido said in Caracas against Maduro under the dictatorship of Gen. Augusto Pinochet, who murdered thousands of Chileans including her own father? And could she say that the Maduro Government is a dictatorship when the traitor of his own homeland, Juan Guaido, is not only backing but also justifying this awful human rights violation that entails the sacrifice of a whole population, destroying his own country, by cynically considering all this “an achievement” in the struggle against Maduro? And he is allowed to say all of this in Caracas, not in the exile.

All this pain, hunger, death, and terrorism imposed by Washington just to help “its” ridiculous “interim” president of Venezuela to occupy the presidential seat over so many corpses at his feet. Is this what they call democracy?

According to Guaido, those “sanctions imposed by the U.S. Administration are against the Maduro regime” and they are imposed as the “result of the tools the world and democracies have to put pressure on a dictatorship.” If these are democratic tools, what can we hope for the world?

The measures confirm that Trump never wanted the dialog. What he wants is the absolute control of Venezuela, seizing the oil and other resources of that country, as several of his officials have confessed.

There is much more in these years of counter-insurgency (and asymmetric, hybrid, and more) war, by means of all kind of threats, including sabotages and terror, constant violation of the air space, and other actions. Combining all what Washington has looted and the gold in Great Britain banks, about 50 billion dollars have already been frozen.

This is also an escalation of war in the economic, media, political and military warfare against China and Russia. The recent response by China to President Donald Trump’s boasting made the White House and the world tremble, even though the fierce advisors of the president seem not to understand that everything has changed and that they are no longer the almighty and unique power.

Not understanding his real situation, in his Neronian style, Trump points his finger to the map and orders that Jerusalem will be the capital city of Israel and he moves his embassy to that city. The (Syrian) Golan Heights belong to Israel. All of this after having ordered to “test” a powerful bomb over the invaded and occupied Afghanistan. With his finger up, he decided that Guaido —a Venezuelan trained by U.S. agencies and intelligence services but with evident little experience— should be the “interim president” of Venezuela.

Recently, Trump and his soul mate Jair Bolsonaro ordered, as the owners of the world, to suspend a political trial against Paraguayan President Abdo Benitez. The latter had stepped back after signing an energy deal with the Brazilian President in which he handed over nothing but his country’s sovereignty, favoring Brazil regarding the Itaipu hydroelectric plant. The agreement was understood by the population and even members of his Cabinet as “treason to the homeland” and three of his ministers resigned, including the Foreign Minister, proving that dignity can exist even in the shadows.

And the worst is that (Nero) Trump orders Europe, or rather the European governments —who are as decadent as he is— with some respectful exceptions, to accept the “interim president” absurdity. Meanwhile, real embassies of Maduro’s Government go on with their diplomatic duties. This charade is unprecedented insanity, of historic proportions.

The Non-Aligned Movement (NAM), met in Caracas last July where they discussed how to respond to these type of situations, understanding that the new decision on Venezuela is more than just an escalation of a conflict. As a matter of fact, under the argument of preparing its invasion of this South American country, the United States has spread its military bases and facilities throughout Latin America, including the countries where they already existed. The Israeli military is present in all of these cases.

The NAM coordination team in Caracas created a study group to analyze the unilateral coercive measures launched by the U.S. Government against sovereign nations such as Venezuela, Cuba and Nicaragua in our region and others in the world. For the first time, the movement will study the topic on “how to hold back aggressions against the sovereignty of our people,” according to Venezuelan Foreign Minister Jorge Arreaza.

The time has arrived, not only for people’s active solidarity with Venezuela, several of them also victims of the big geo-strategic re colonizing project, but unity is also necessary among most of the countries in the world to stop this fascist power seeking to spread its “safe borders” by laying siege to humanity.