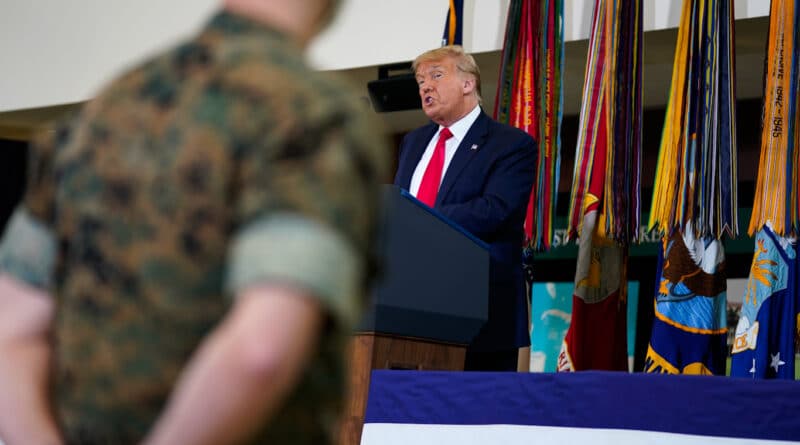 “Something will happen with Venezuela. That’s all I can tell you,” Trump said, before not-so-cryptically adding that Washington would be “very much involved.”

On a trip to COVID-19 riddled Florida this weekend, President Donald Trump not-so-cryptically revealed that he had something big planned for Venezuela during a meeting with leaders of the U.S. military’s Southern Command. “Something will happen with Venezuela. That’s all I can tell you,” he said, before adding that Washington would be “very much involved” in what he was referencing.

On Trump’s orders, Southern Command moved large numbers of forces to the region, ostensibly to conduct a counter-narcotics operation against Venezuela, which the U.S. has described as a “narco state,” with the DEA offering a $15 million bounty for President Maduro’s head. This, despite the fact the U.S. government’s own reports on drug smuggling barely even mention Venezuela and official summaries show that U.S.-allies Colombia and Ecuador are the sources of the vast majority of South American drugs that end up in the U.S. In May, Juan Guaidó, the Washington-backed self-declared president of Venezuela, green-lighted a coup attempt led by American ex-Green Berets that ended in total failure.

Despite privately writing him off as a spent force, the “Beto O’Rourke of Venezuela,” President Trump continued to publicly back Guaidó, telling a group of hardline Venezuelan and Cuban expats in Miami-Dade County this weekend that he still “stands with the righteous leader of Venezuela.” A recent poll found that only three percent of Venezuelans recognize Guaidó as legitimate, and over 80 percent of the country say the entire opposition movement has “no credibility” whatsoever.

This weekend, Trump’s Special Advisor on Venezuela, Elliott Abrams announced brand new sanctions not just on Venezuela, which is under a virtual total blockade, but on any company found to be helping the importation of goods to the country in any way. Abrams has managed to force London-based Lloyd’s Registrar to withdraw insurance and registration to ships the U.S. deems to be helping break the blockade, meaning they are unable to dock anywhere in the world. “It’s just not worth the hassle or the risk for [companies],” he gleefully told Reuters. “There are people who don’t cooperate…We’ll go after the ship, the ship owner, the ship captain.” U.S. citizens breaking the embargo already face 30 years in prison. Thus, Abrams appears to have dusted off his Nicaragua strategy from the 1980s, where the country was sanctioned and attacked so badly that they eventually gave in and accepted the U.S.-backed candidate Violetta Chamorro as president in 1990.

IMAGE
Washington’s power and influence have helped bring the Venezuelan economy to a standstill, with oil exports at their lowest in modern history. The sanctions regime was formally condemned by the United Nations; an American U.N. rapporteur visiting the country and estimating that over 100,000 people have been killed as a result, declaring the U.S. guilty of “crimes against humanity.” Sanctions are a bi-partisan endeavor, beginning under President Obama in 2015, who declared a “national emergency” due to the “unusual and extraordinary threat” Venezuela was posing to the United States.

Trump’s latest move to tighten the noose even further around the necks of Venezuelans appears to be at least partially motivated by his desire to shore up the vote of the large Latin American expat vote in Southern Florida, a state where polls show he is falling further behind Joe Biden. In the 2013 election, at least 92.5 percent of Venezuelans in Florida voted against Maduro and for the opposition candidate Henrique Capriles Radonski.

Biden has also taken a hard line on Venezuela and is attempting to out-hawk Trump on the issue. “It’s time for free and fair elections so that the Venezuelan people can turn the page on the corrupt and repressive Maduro regime,” he said, adding that, “Trump talks tough on Venezuela, but admires thugs and dictators like Nicolas Maduro. As President, I will stand with the Venezuelan people and for democracy.” Last month the largest Democratic Super PAC began running ads aimed at Latino Florida Latinos comparing Trump to Maduro, his predecessor Hugo Chavez, and former Cuban leader Fidel Castro. A recent poll found that only 19 percent of Venezuelans had confidence that the situation would improve in the short term. The U.S.’ latest moves suggest they would be correct in their pessimism.