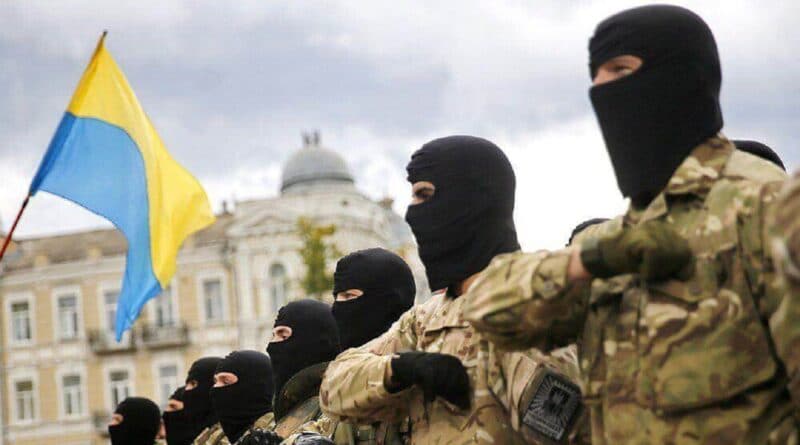 Ukraine’s Western-backed government has criminalized socialist political parties, while its Nazi-infiltrated intelligence agencies are hunting down leftists, accusing them of being too soft on Russia. This comes after Kiev gave state honors to WWII-era Ukrainian fascists who collaborated with Hitler.

In an early morning speech on March 20, President Volodymyr Zelensky announced that Ukraine’s National Security and Defense Council was banning 11 opposition political parties, half of which are left-wing.

Zelensky published an English-language transcript of this speech on the official website of the office of the president, boasting of having prohibited the dozen opposition parties.

To justify illegalizing these left-wing forces, the Ukrainian government accused them of being pro-Russian, or having unproven “ties” to Moscow. However, some of these opposition parties have publicly condemned the Russian invasion.

Ukraine, which is under martial law, is using the war with Russia to crush all political opposition. And the US and EU are staunchly supporting the regime as it consolidates absolute power.

On March 20, Zelensky also signed a decree to seize control of all private media outlets, combining them into one state-controlled platform, with a “unified information policy” that ensures no deviation from the official Ukrainian regime propaganda line.

Back in February 2021, more than a year before Russia invaded, Zelensky similarly shut down several TV channels that criticized his government. He subsequently arrested opposition politicians who challenged his iron grip on power, such as the elected lawmaker Viktor Medvedchuk. Zelensky did this with full Western backing.

But this is far from the first time that Kiev has implemented such extremist policies.

After the US-backed “Maidan” coup in 2014, the Ukrainian regime effectively declared war on the left. Kiev banned all communist parties and launched a far-right “decommunization” campaign that made it illegal to be a communist.

Simultaneously, the Western-backed Ukrainian government gave state honors to Ukrainian fascists who had collaborated with Nazi Germany in the Holocaust.

Britain’s establishment newspaper The Guardian admitted this in a 2015 article titled “Ukraine bans Soviet symbols and criminalises sympathy for communism.”

The Guardian wrote, “Two new laws that ban communist symbols while honouring nationalist groups that collaborated with the Nazis have come into effect in Ukraine, raising concerns that Kiev could be stifling free speech and further fragmenting the war-torn country.”

These articles say something about the state of Ukraine's democracy.

The Communist Party is banned. Singing the Internationale can get you 5 years in prison. It's an offence to deny the "criminal character" of the USSR.

Meanwhile Nazi collaborators are honoured and racism is ok pic.twitter.com/gKUKrmHiux

The use of all Marxist symbols is illegal in Ukraine, including the hammer and sickle or even Soviet-era souvenirs and memorabilia.

After the Western-backed 2014 coup, it was made illegal in Ukraine to sing The Internationale, the anthem of the global socialist movement.

Any individual caught violating Ukraine’s far-right “decommunization” laws faces up to five years in prison, and members of left-wing organizations face up to 10 years behind bars.

The United States and European Union strongly supported the right-wing regime in Kiev as it passed these extremist policies, blatantly violating the civil liberties of left-wing Ukrainians.

Since Russia invaded Ukraine on February 24, there have also been reports of rampant use of torture and other extreme human rights abuses committed by the neo-Nazi and far-right forces in Ukraine’s security services.

Ukrainian leftists created a Telegram channel called “Repression of the left and dissenters in Ukraine,” sharing chilling reports of brutally violent crimes carried out by the Western-backed Ukrainian regime. (Some of their stories are embedded at the bottom of this article.)

The authenticity of these accounts was confirmed by prominent left-wing activist Paweł Wargan, the coordinator of the International Secretariat of the Progressive International.

The internal Security Service of Ukraine (SBU), which has been infiltrated by neo-Nazis and far-right extremists, has been particularly vicious in its crackdown on the Ukrainian left.

Left-wing activists and journalists have been quite literally hunted down and tortured. Extremists in the SBU also shot and killed a Ukrainian negotiator who had been involved in peace talks with Russia, accusing him of “treason.”

Amid the horrors of war, the Ukrainian left has faced tremendous and violent repression. Read their plea for international solidarity. pic.twitter.com/bX42kYKurV

Following the US-sponsored coup in Ukraine in 2014, neo-Nazi militias like the Azov regiment were officially incorporated into the National Guard, while the fascist Aidar Battalion became part of the Armed Forces.

NATO member states have sent weapons to these Ukrainian neo-Nazis, and have even trained them.

After Russia invaded, Ukraine’s National Guard posted a propaganda video on Twitter boasting of a neo-Nazi fighter from the Azov detachment greasing bullets with pig fat in order to kill Chechen Muslims, which the Ukrainian state institution dehumanized as “orcs.”

While the Ukrainian regime criminalizes socialist parties and hunts down leftists, in alliance with neo-Nazis, Western media pundits are heaping praise on Kiev.

David Frum, a former speechwriter for US President George W. Bush and editor of the centrist Atlantic magazine, insisted on Twitter that “Ukraine may be the first example in human history of a country that under the pressure of war is becoming *more* tolerant and *more* liberal.”

Frum tweeted this mere hours before Ukraine banned socialist parties and seized control of all media outlets in the country.

Below Multipolarista has embedded reports compiled by the “Repression of the left and dissenters in Ukraine” Telegram channel:

Since the Russian invasion of Ukraine, representatives of the far-right and liberal milieu have been spreading calls for violence and even for the killing of those who had previously publicly advocated the implementation of the Minsk agreements, against “decommunisation” and for a peaceful resolution of the conflict in Donbas. Activists of left-wing groups were the first to be threatened.

On 3 March, SBU officers, with the participation of neo-Nazis from the Azov group, detained leftist activist Oleksandr Matyushenko from the Levitsa association in Dnipropetrovsk.

He was charged under Article 437 of the Ukrainian Criminal Code – “waging aggressive war”. And, as the courts in Ukraine do not work now, he was arrested for 30 days without trial – on the prosecutor’s order.

The details of the criminal case are not known because the SBU refuses to introduce it to anyone but his lawyer. But most lawyers refuse to defend him or demand 3,000 dollars for their services, a rather large sum for Ukrainians.

In Kyiv, arrests had begun even earlier. On 27 February, brothers Mikhail and Aleksandr Kononovich, leaders of the Ukrainian Komsomol [the Communist Youth], ethnic Belarusians, were detained.

It is not known where they are and what they are accused of, as there is no contact with them.

On 7 March, journalist Dmitriy Dzhangirov, a member of the New Socialism party, Vasyl Volha, a former leader of the Union of Left Forces, journalist Yury Dudkin and publicist Aleksandr Karevin, who managed to write on his Facebook page: “The SBU has come”, were detained in Kiev.

Where all of them are now and what they are accused of is also unknown. Dzhangirov’s Facebook page posted a video of him, possibly under physical duress, saying things that are not typical of him.

On 11 March, left-wing activist Spartak Golovachev disappeared in Kharkiv. “The door is being broken down by armed men in Ukrainian uniforms. Goodbye,” he managed to write on social media.

It should be noted that there is fighting for Kharkiv, but in general it is under the control of the Ukrainian armed forces.

On March 11, in Odessa, the SBU detained Elena Vyacheslavova, the daughter of Mikhail Vyacheslavov, who died on May 2, 2014 in the fire of the Odessa House of Trade Unions.

The whereabouts of several members of the left-wing New Socialism and Derzhava parties are also unknown. They have stopped making contact or writing anything on social media. They may be in hiding, but they may also have been detained.

On March 13, in a village near Odessa, neighbors with nationalist sentiments burned down the house of left-wing activist Dmitry Lazarev.

On March 4, Vladimir Ivanov, a left-wing activist from Zaporozhye, disappeared. His whereabouts are unknown. Posts that are uncharacteristic for him are appearing in his Telegram account.

According to reports from Dnepropetrovsk, on March 19, in the city of Krivoy Rog, security forces broke into a house and detained Yuriy Bobchenko, chairman of the Trade Union of Metallurgists and Miners of Ukraine at the Arcelor Mital Krivoy Rog enterprise, owned by transnational capital.

All indications are that as the fighting continues, the repression of dissenters and leftists will continue.

Our capacity to defend the rights of the politically repressed in Ukraine is now very limited.

And solidarity with Ukrainian political prisoners of the left and human rights defenders in all countries is very important to us.