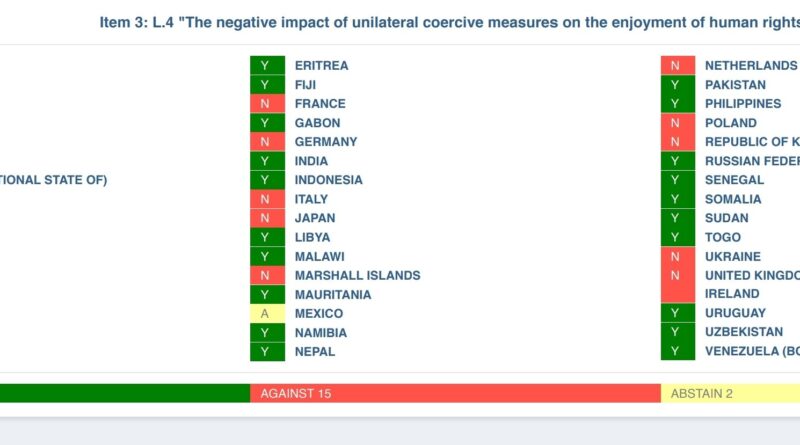 This Tuesday, March 23, the Human Rights Council of the United Nations (UNHRC) passed a resolution on the negative impact of unilateral sanctions on enjoyment of human rights, by majority.

This was reported by the Foreign Affairs Minister of the Bolivarian Republic of Venezuela, Jorge Arreaza, on his Twitter account, in which he expressed: “Its impact is so obvious, that due to elementary ethics, the countries that voted against should lose their seat on the Council.”

RELATED CONTENT: Venezuelan Women Endure the “Sanctions” with Their Bodies

The Head of Venezuelan diplomacy showed the result of the votes in the UNHRC on his Twitter account, which resulted in 30 countries being in favor and 15 against, with two nations abstaining (Mexico and Armenia).

The member countries of the UNHRC that voted against were:

Articles 155 and 56 of the United Nations Charter are the fundamental bases on which unilateral measures are delegitimized. They state that human rights and the promotion of the well-being of peoples are one of the objectives of the UN. Therefore, countries collectively or individually should strive to make this objective a reality, reported HispanTV news website.

Featured image: The Hall of Shame of those countries that voted against a basic and elemental human rights resolution at the US Human Rights Council. Photo courtesy of @jaarreaza.