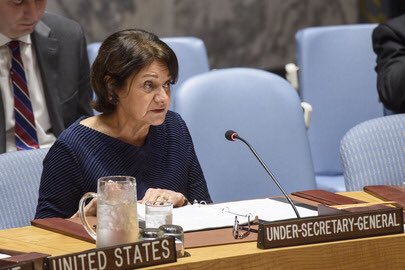 United Nations Under-Secretary-General (UN) for Political Affairs and Peacebuilding, Rosemary DiCarlo, said Wednesday that US sanctions against Venezuela exacerbate a situation that is already critical amid the coronavirus pandemic.

During the reading of a report that started the UN Security Council meeting where the unsuccessful attempt at a maritime incursion against Venezuela was discussed, DiCarlo emphasized that the Secretary General of the organization, Antonio Guterres “has repeatedly called for a negotiated solution between Venezuelans” and called on all political actors to resume constructive negotiation.

“There is great concern regarding the confrontation and the absence of serious negotiations between the main political parties in Venezuela, especially amid the potentially far-reaching effects of the pandemic,” said the authority, while rejecting the politicization of the humanitarian aid during the health emergency.

“The humanitarian aid provided by the UN and our partners throughout the country is governed by the principles of independence, humanity, neutrality and impartiality,” she said in this regard.

DiCarlo added that the UN remains convinced that a true negotiation between the main political actors in Venezuela “is the only way to go.”

In this regard, she reiterated that in the face of the pandemic, an “agreement that strengthens democratic governance” is required, and urged “all member states to support this appeal.”

In the early hours of May 3, a subversive group attempted to enter Venezuela through the north-central coast of the country aboard speedboats, they were intercepted and repelled by the security forces. So far, more than 40 involved in this failed mercenary attack have been captured.