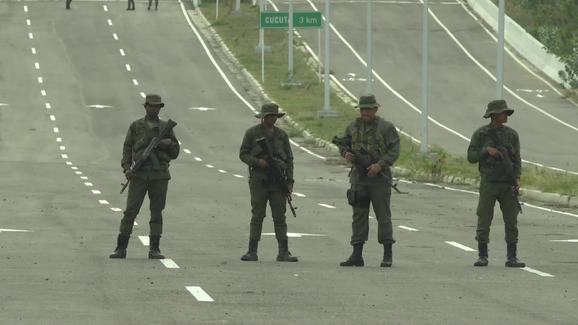 International News Security and Defense
April 17, 2019 orinocotribune US Imperialism, us military aggression, we will give them hell

The U.S. military is ready to attack Venezuela by the end of the year, U.S. Southern Commander Admiral Craig S. Faller said earlier this week.

According to Adm. Faller, the U.S. military is “on the balls of our feet” as his forces await instructions from U.S. President Donald Trump.

“President Trump is determined not to see Venezuela fall under the sway of foreign powers,” Faller said.

In an interview with Foreign Policy, Adm. Faller criticized China for backing the government of Venezuelan President Nicolas Maduro.

“China came out publicly, a state spokesman, implying the blackouts were attributable to U.S. cyberattacks,” Faller claimed, adding “that is just such a blatant lie. The blackouts are attributed to Maduro’s inept leadership, corruption, inattention to his people, and lack of concern for any humanity.”

“I think the biggest threat to democracy and the way of life around the world is the trend that we see in China,’ Faller said.

He would then claim that the situation in Venezuela could soon turn into another Syria if Maduro is still in power.

“The crisis in Venezuela could approach that degree by the end of this year if Maduro still remains in power; it is that bad,” he added.