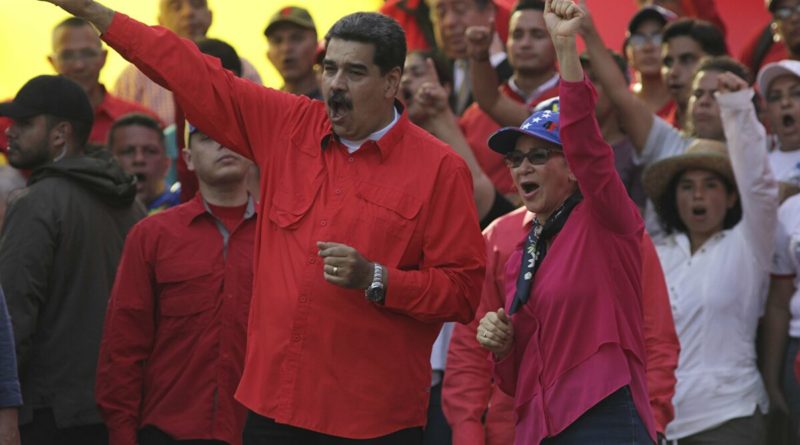 In March 2020, the US State Department offered a series of rewards for information on five top officials in the government of Venezuelan President Nicolas Maduro, including $15 million for Maduro himself, claiming he was the leader of a cocaine trafficking group involving senior politicians and Venezuelan military and judiciary members.

Washington is reportedly preparing to charge the wife of Venezuelan President Nicolas Maduro in the coming months, seeking her indictment on crimes such as drug trafficking and corruption, reports Reuters.

The mulled charges against Cilia Flores, according to four sources cited by the agency, are believed to be based in part on her links with her two nephews, arrested in 2015 over a thwarted cocaine transaction.

According to the report, Venezuela’s First Lady had helped raise her nephews and maintained a close relationship with them.

Currently in a Florida penitentiary, Efrain Campo and Franqui Flores were arrested in November 2015 in Haiti by the US Drug Enforcement Agency on charges of planning to sell $20 million of cocaine in the United States.

After pleading not guilty, in 2017 the two men were convicted and sentenced to 18 years in prison.

Alleged ‘Coke-trafficking Racket’
Two sources are cited as revealing that investigators have at their disposal text messages between the two convicted nephews and Cilia Flores, in which they allegedly discuss a cocaine shipment.

Reuters acknowledges it has not seen the text of the reported messages.

Earlier, in interviews for the agency, a jailed former bodyguard of Flores, Yazenky Lamas, said the First Lady was aware of drug-related crimes by her family members.

Extradited to the United States on drug charges in 2017, Lamas had agreed to a plea deal with US prosecutors, admitting to charges of drug trafficking. Lamas subsequently went on to become a cooperating witness, according to a confidential Justice Department document cited by Reuters.

‘Slanderous and Offensive’
Venezuela’s Information Minister Jorge Rodriguez responded by slamming the current report about possible criminal charges against Cilia Flores as “nauseating, slanderous and offensive,” according to the outlet.

A spokeswoman for the US Department of Justice, Nicole Navas, declined to give any official comment on the report.

Cilia Flores and her office at the National Assembly, likewise, offered no comment.

In late March, Washington offered a series of rewards for information on five top officials in the government of Venezuelan President Nicolas Maduro, including $15 million for Maduro himself, based on alleged drug-trafficking charges.

​According to allegations of American officials, Maduro was the leader of a cocaine trafficking group called “The Cartel of the Suns”, involving senior politicians and Venezuelan military and judiciary members, seeking to flood the US with cocaine, while bolstering his own position and wealth.

Evidence against Maduro was reportedly collected over several years by investigators in Miami, New York, Houston and Washington.
Nicolas Maduro vehemently dismissed the charges against him and his colleagues in a televised speech, lambasting them as a politically motivated fabrication by the administration of US President Donald Trump.

“Donald Trump, you are a miserable human being… You manage international relations like a New York mafia extortion artist you once were as a real estate boss,” said Maduro in a televised address.

Fresh Campaign of Pressure
Both the March indictments and the report on possible criminal charges against Cilia Flores come amid a fresh campaign of pressure on Nicholas Maduro, who along with his inner circle was sanctioned starting in 2017 by the US Treasury Department.

Venezuela has been in the grips of a political crisis since 2019, when US-backed opposition leader Juan Guaido proclaimed himself “interim president” with the backing of most of the Western countries, who proclaimed the reelection of Nicholas Maduro in 2018 a sham.

Shortly after, the US and its allies starting to seize Venezuelan state assets abroad and impose crippling sanctions on the country’s companies, in moves that were slammed by Venezuelan authorities as nothing short of “economic warfare.”