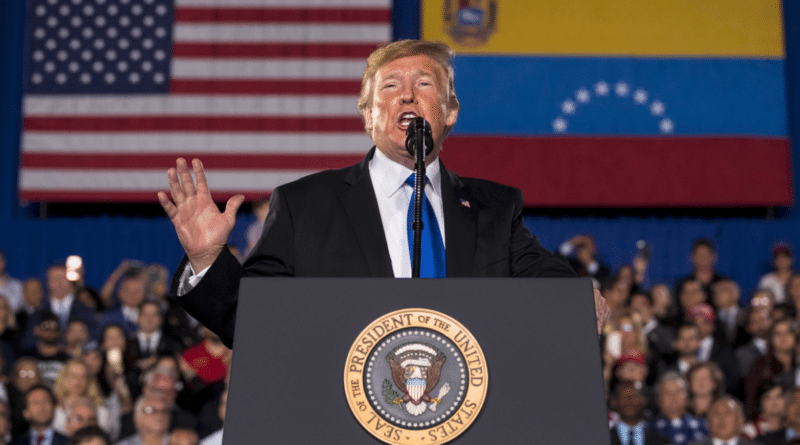 The White House is moving to tighten the screws on Venezuela ahead of November’s election.

“Whatever oil business is left has to be completed (by the deadline),” an anonymous source told Reuters, while a State Department spokesman said Washington continues to warn companies on the “risks” they face by dealing with Venezuelan state oil company PDVSA.

US President Donald Trump has allegedly expressed “frustration” that sanctions have not succeeded in ousting the Maduro government. The White House’s hardening stance comes less than 90 days ahead of November presidential elections, which Trump hopes to win with the support of Latin American emigre communities in Florida.

Starting with financial sanctions against PDVSA in August 2017, the US Treasury Department has imposed successive rounds of measures targeting Caracas’ main source of income. A January 2019 oil embargo was later expanded to a blanket ban on all dealings with Venezuelan state entities. The South American nation’s oil production has plummeted, falling from 1.911 million barrels per day (bpd) in 2017 to a decades-low record of 336,000 bpd in June.

The measures targeting Venezuela’s oil industry were further escalated in 2020 with the levying of secondary sanctions against two Rosneft subsidiaries. The Russian oil giant had been carrying a large proportion of Venezuelan crude before rerouting it to other destinations. Following Washington’s secondary sanctions, Rosneft transferred its assets to a Kremlin-owned company.

Most recently, the US Treasury Department looked to further choke off the Caribbean country’s oil exports by targeting vessels and shipping companies. PDVSA has attempted to assume shipping costs but its fleet has likewise been hurt by US sanctions.

Since the January 2019 oil embargo, foreign companies have gradually ceased to deal directly with PDVSA, while those who did requested special permission from US authorities. The Treasury Department has also issued temporary waivers to allow corporations to wind down their Venezuela activities. These have included California-based oil giant Chevron, which operates several joint ventures with PDVSA.

According to the Wall Street Journal, threats of legal action and sanctions forced the Greek owner of four fuel tankers to surrender the Iranian fuel to US authorities in international waters. While the current location of the ships is unknown, they reportedly transferred the fuel cargo to other tankers bound for Houston.

Tehran reacted to the first reports through its ambassador to Venezuela Hojjatollah Soltani, who denied that the tankers were Iranian. The country’s oil minister, Biyan Namdar Zangane, later confirmed that the fuel had indeed been shipped from Iran and it had already been paid for by Venezuela.

Venezuelan authorities have yet to comment on the seizure.

With sanctions taking a hit on the country’s refining industry and also driving away fuel exporters, Caracas turned to Tehran to address its worsening fuel shortages.

Iran sent five fuel tankers in May while also offering technical assistance in repairing Venezuela’s most important refineries. The Amuay, Cardon and El Palito facilities have been brought back online, despite operating intermittently and severely below capacity.