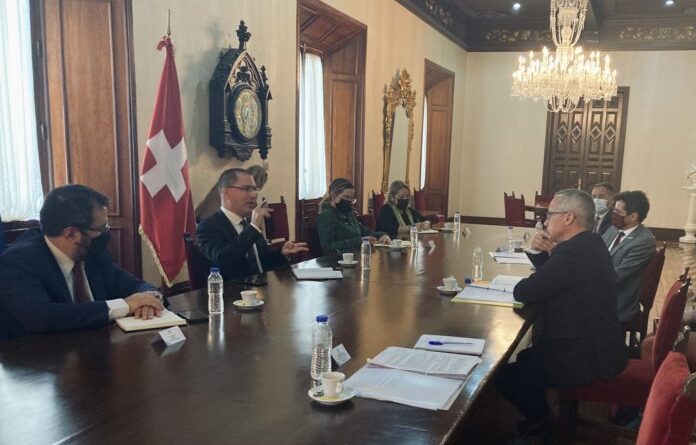 Venezuelan Minister for Foreign Affairs, Jorge Arreaza, met with the head of the Peace and Human Rights Division of the Federal Department of Foreign Affairs of the Swiss Confederation, Simón Geissbühler, to review the progress of the dialogue process in Venezuela.

The meeting between the representatives from both countries was held at Casa Amarilla, headquarters of the Venezuelan Foreign Affairs Ministry. The Venezuelan government has repeatedly promoted and encouraged the process despite constant attempts by sectors of the opposition to destabilize the government using illegal and undiplomatic maneuvers.

Various political sectors will participate in this national dialogue in favor of the stability of the country.

As part of the advancement of the process, the President of the Republic, Nicolás Maduro, met this week with the Special Commission of the National Assembly for Dialogue, Peace, and National Reconciliation.

During that meeting, the president stressed that he was willing to meet with everyone without prejudice.

“I am ready to speak with everyone at this table or those who summon me,” said the head of state. ”I have no prejudices, inferiority or superiority complexes.”

Likewise, Maduro reiterated the importance of advancing in the national dialogue in the economic area, public services, and security.

For his part, the president of the National Assembly, Jorge Rodríguez, stressed that more points of agreement than differences have come up in the dialogue process, which is good news for the people of Venezuela.

”The great majority have resorted to the strategy of dialogue to resolve situations that could seem insurmountable,” said Rodríguez.

”In the diplomatic world,” commented an expert in diplomatic affairs consulted by Orinoco Tribune, ”the Swiss diplomacy, despite their public relations propaganda of ‘neutrality,’ is seen as an appendage of US interests—in other words, a branch of the US State Department and US intelligence services.”