Caracas has also created a special military zone and brigade to deal with the situation in Apure state, where 17 people have died.

Mérida, April 5, 2021 (venezuelanalysis.com) – Venezuela has called on the United Nations (UN) to intervene over recent clashes with “armed irregular groups” on the Colombian border.

Caracas is requesting mediation with Colombian authorities, as well as an international investigation into the “irregular groups” operating in the border area and technical on-the-ground assistance to deactivate an undisclosed number of anti-personnel landmines that have been discovered.

“Our engineers already have all the know-how and equipment [to deactivate the mines] but we wish to invite the UN to assist with all its up-to-date techniques and methods,” Padrino Lopez told the press, promising to clean up “every square centimeter” of the porous border region.

Venezuela is a signatory of the 1997 Convention on the Prohibition of the Use, Stockpiling, Production and Transfer of Anti-Personnel Mines and on their Destruction, and was declared free of landmines in 2007.

The government’s requests follow an appeal from over sixty Colombian and Venezuelan NGOs for the UN to assign a special envoy to deal with the conflict, claiming human rights abuses and forced displacement. Likewise, thirty Venezuelan human rights organizations issued a joint statement last week, condemning the “actions of armed illegal groups from Colombia” and calling for respect for Venezuela’s sovereignty. The UN has not responded to the calls at the time of writing. 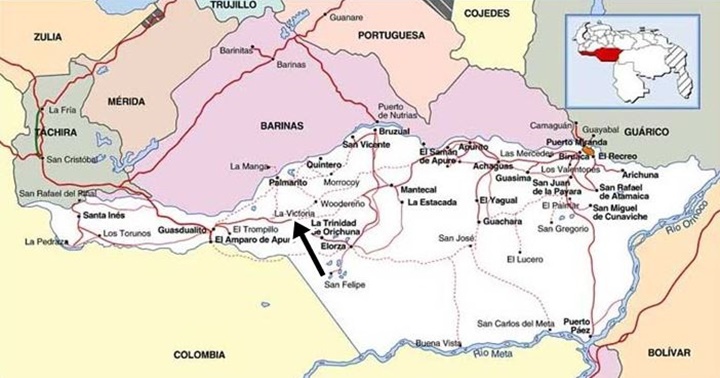 Last month, Caracas reported that “irregular armed groups” attacked government installations and Venezuelan troops around La Victoria in Apure state. In response, President Nicolas Maduro ordered a military operation called Bolivarian Shield 2021, which looked to “neutralize” the alleged “drug-running terrorists.” The executive has pointed the finger at “imperialist agents” with “regime change” agendas for being behind the violence, including the Colombian government and CIA.

In an update on the military operation, Padrino Lopez informed the nation on Monday that 33 arrests have been made and nine “terrorists” have died in the clashes.

Equally, he explained that 34 Venezuelan soldiers have been injured and eight have died, including Sergeants Andriel Isturiz and Jesus Vasquez, who perished from landmine explosions on Thursday. No civilian deaths have been reported.

The minister went on to explain that the Venezuelan armed forces have dismantled nine illegal camps and decommissioned a host of arms,reportedly including mobile grenade launchers, satellite radios, and landmines.

During his press conference, he also unveiled the creation of a “special and temporary” military security zone and command center to “safeguard internal order, peace and human rights” in the region. It will have jurisdiction over the Apure municipalities of Páez, Muñoz and Rómulo Gallego, where it will oversee land, water and air travel restrictions. It will also house the newly created Negro Primero Special 94th Brigade, which will lead operations in the border region.

Highlighting the penetration of Colombia’s narcotics industry into Venezuela, the military chief also applauded the “short-lived and media-oriented” presence of Colombia’s military on its side of the border last week, urging Bogotá to take its security commitments more seriously and assist in controlling “irregular armed groups” and prevent the use of landmines.

“We [the Venezuelan armed forces] have done more in five days [to safeguard the border and keep the peace] than the Colombians have in a year,” the minister went on to say.

Padrino also railed against the foreign and rightwing media’s coverage of the border clashes, questioning recent Colombian reports of 6,500 migrants crossing into Arauquita. According to the minister, the latest Venezuelan census reports only 3,500 local residents.

Finally, the minister congratulated local authorities in Apure state who have been attending to the population of the region with medical, food and other social operatives, as well as supporting the reopening of local businesses. “Normality is returning to the region,” he explained.

While the identity of the “irregular armed groups” remains unclear, Caracas has been quick to link them to Colombian drug cartels. A number of analysts have pointed to the diverse guerrilla fractions generated by the demobilization of the Revolutionary Armed Forces of Colombia (FARC-EP). Following the 2016 peace accords, a number of FARC fronts dissented, while others took up arms again after accusing Colombian authorities of not fulfilling their commitments.

Last week, Venezuelan journalist Erika Sanoja claimed a “dissident FARC group which now follows [guerilla commander Miguel Santillana alias] Gentil Duarte” was involved in the conflict. She suggested the group now works as a “type of US franchise” but did not substantiate the claim.

For its part, one of the major FARC blocs which has also returned to arms and reportedly enjoys closer relations with the Maduro government, the Second Marquetalia, has issued a statement distancing itself from Duarte’s front in light of the border fighting.