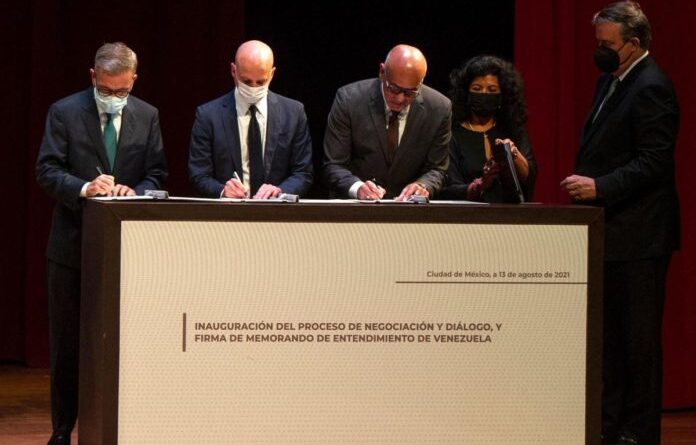 Venezuelan Minister for Foreign Affairs Félix Plasencia welcomed the willingness of Peru and its Foreign Minister Maúrtua to accompany the political dialogue between the national government and part of the extreme right opposition.

In this sense, Plasencia stressed that this position opens a new stage of rapprochement between both sister countries.

“We welcome Foreign Minister Maúrtua’s statements in which he expresses Peru’s willingness to accompany the political dialogue between Venezuelans, a position that opens a new stage of rapprochement between sister countries,” Plasencia tweeted. “We wish the ambassador and colleague success in their work.”

Plasencia’s declaration comes after the recently appointed Peruvian Foreign Minister, Óscar Maúrtua, celebrated the dialogue process that the Venezuelan government started with the Unitary Opposition Platform. At the same time, he offered Peru as an alternative venue in addition to Mexico for the talks.

During his swearing-in speech, Maúrtua expressed Peru’s support for the dialogue that is taking place in Mexico between these two political sectors of Venezuela, which has the collective support of the entire international community.

The Peruvian Foreign Minister explained, “From here, we offer our support to make this process bear fruit, including, eventually, being an alternate venue for the negotiations.” He added that Peru will continue the international policy announced by President Pedro Castillo.

Recently, Castillo assured that he will follow the principle of non-interference, which condemns blockades and coercive measures. Castillo also announced a departure from the previous Peruvian stand of being a US satellite government in Washington’s attempts to oust the legitimate government of President Nicolás Maduro.

On August 13, both political sectors of Venezuela signed a memorandum of understanding to reach agreements in different areas.

The issues to be discussed in the dialogue process are: lifting unilateral coercive measures implemented against Venezuela; restoration of the right to the Venezuelan assets seized abroad; renunciation of violence; reparations to victims; and guarantees of implementation, monitoring, and verification of what has been agreed.

For its part, the opposition added to the agenda: political rights, electoral guarantees, and a timetable for observable elections.

Negotiations are expected to resume in Mexico between September 3-6 and will be mediated by Norway, Russia, and the Netherlands.