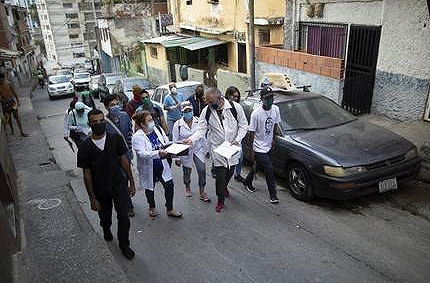 Venezuela resists. It resists not only the attacks and threats of imperialism, which have currently become even worse in the face of the South-South solidarity of Venezuela and Iran. It also resists the coronavirus.

The numbers speak for themselves: the tally is 10 deaths from coronavirus compared to more than 650 deaths in neighboring Colombia. The rest of the statistics can also be considered positive. Venezuela has an accumulated total of 882 infections, of which the majority are imported – none from China. There are 303 from Colombia, 65 from Brazil, 49 from Peru, 35 from Ecuador, 29 from Spain, 10 from the Dominican Republic, 5 from Chile, 4 from the U.S., and 4 from Mexico.

Faced with this information, many people ask how it is possible that a country of 30 million people, suffering a serious economic crisis, can possibly be doing better than other Latin American countries that are part of the Organization for Economic Co-operation and Development (OECD), whether those countries are governed by progressive forces, like Mexico, or by right-wing powers, like Chile.

The answer seems simple, but it isn’t. We need to summarize the answer in three parts, each of them equal in importance to the others: strict quarantine measures, a neighborhood based health system, and the massive use of technology.

To start with, Venezuela declared a total quarantine on March 17, and was the first Latin American country to do so. Venezuela closed its borders and cancelled flights from Europe, faced with what Nicolás Maduro called the most serious situation that we have ever faced. Five days later, on March 22, Maduro insisted upon a stricter quarantine, imposing restrictive measure on mobility, with limited exceptions for health workers, and for obtaining medicines and food supplies; the use of face-masks in public spaces was also made obligatory.

Furthermore, these very strict measures were put into place while protecting the social and labor rights of the Venezuelan people. Guaranteed job security was declared for all the workers in the country until December 31 of this year, and a special plan was considered by the State to pay salaries of those who work in small and medium-sized private businesses for six months. For the same six month period, rents for businesses and homes were also suspended, with a promise from the government to compensate the landlords.

The second element of the response that we must consider can be summarized in the acronym CDI – Centro de Diagnóstico Integral. (Wholistic Diagnostic Center). In 2003, Hugo Chavez inspired the democratization of the Venezuelan health system, creating doctors’ offices even in the barrios where the roofs are made of cardboard, out there where the rain sounds sad and hope passes far away. With Misión Barrio Adentro, Cuban doctors arrived in places where a Venezuelan doctor had never wanted to go, and they did so hand in hand with the leaders of those communities. Nobody had to tell me this – I was there in the summer of 2003 and I saw with my own eyes how poor people wept as they saw a doctor walk into their neighborhood for the first time.

Today the Wholistic Diagnostic Centers, which have isolation rooms and which are supplied with interferon, a medication produced in Cuba that has been demonstrated to be the most effective medicine for treating COVID-19 to date, are in the frontline trenches at the time of detecting and isolating patients who are positive for the virus, so as to block the spread of the pandemic.

And furthermore, the third element, the use of technology, complements the health network very effectively. On March 30, the first Chinese airplane arrived in Venezuela, loaded with medication, ventilators, portable ultrasound machines, PCR test kits, medical face-masks, and protective clothing. But, above all, this airplane also carried 8 experts from the National Health Commission of China, charged with the mission of assisting the Venezuelan government in evaluating the situation and designing a strategy of prevention and containment. Following this, more than a million rapid test kits arrived in Venezuela, where they decided to test anyone who requested it, regardless of whether they were symptomatic. Up until now, they have done more than 700,000 tests for detection of Covid-19, which amounts to more than 23,000 tests per million inhabitants, one of the highest testing ratios in the world.

These three measures put into place by the Venezuelan government can be summed up in a single concept: Chavismo – the ideas of President Hugo Chavez. Chavismo, we maintain, is much more than a political identity. It translates into a recovery of the public sphere; into a strong State sector with a health system which, in spite of the difficulties it faces, has been able to resist the onslaught of the pandemic; and into a privileged geo-political relationship with China that has guaranteed cooperation in the areas of health and technology for Venezuela, as a key Latin American partner.

All this has occurred in the midst of an economic blockade that began with the sanctions imposed by Obama in 2015 via the executive order that declared Venezuela a threat to U.S. national security. That has intensified under Trump’s executive orders against the Venezuelan petroleum industry, tightening the screws even more in 2018 with the measures that embargoed all Venezuelan assets in the United States, in excess of $7,000,000,000, along with the blockade of CITGO, the Venezuelan affiliate in the U.S which was also the means of importing replacement and repair parts for Petróleos de Venezuela, S.A., the Venezuelan state-owned oil and natural gas company.

In spite of this, we can affirm that without a doubt Venezuela is defeating not only imperialism but also the pandemic that is ravaging the world-system.