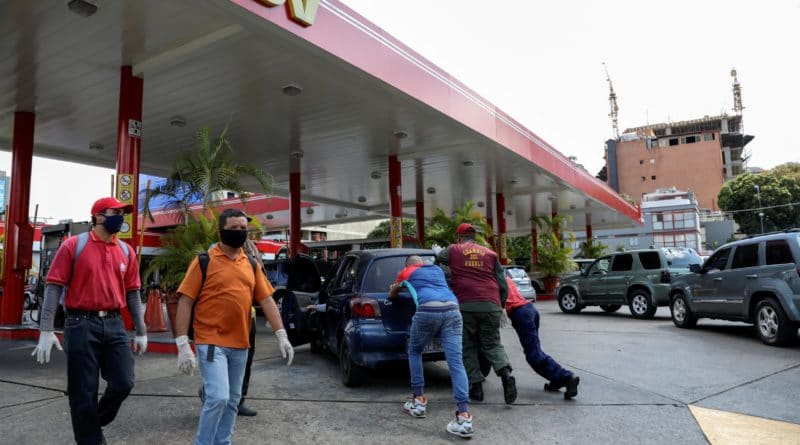 Translator note: The first of five Iranian oil tankers loaded with gasoline and catylists to restore production of Venezuela’s refineries sailed into our territorial waters 200 miles offshore at 7:40 last night welcomed by the Venezuelan Navy and Air Force. The reader can appreciate this biting reprisal by Carola Chávez, a Venezuelan writer, known for her defense of the governments of President Maduro and late President Hugo Chávez in the context of the bourgeois Venezuelan opposition forced to wait for over the last six weeks, days at a time inside their $80,000 gas guzzling 4×4 SUV’s in queues alongside the lowly chavistas in their broken down 20-30 yo Ford, Chevy or Toyota.

She also reflects on the opposition as they completely lost their minds when they felt the pain of US sanctions, losing their Direct TV while sitting isolated by the quarantine finally learning that the 20 year-long US assault makes no distinction between them and the majority poor; that a US missile does not have names written on it nor protects their house or neighborhood from the poor barrios they view from afar and loath.

A stinging rebuke to the Venezuelan opposition

When the various mouthpieces for the United States spoke of imposing sanctions on Venezuela, when they spoke of suffocating the country, the anti-Chavista middle class applauded in fascination, imagining Chavismo suffering but not them, asking for forgiveness on their knees, handing over the country to the gringos, pleading with them to convert us into its other Puerto Rico and them receiving their Green Card.

The sense of not belonging led the anti-Chavista middle class to believe that any action against Venezuela would be only against Chavismo; that they, the decent and thinking civil society, would be simple spectators of a war that they would view comfortably from their balcony. Despite the gringos getting tired of saying that the sanctions are designed to suffocate us, decent and thoughtful people thought that suffocating the country would allow us to breathe.

When Guaidó appeared to them out of nowhere as their president, anti-Chavismo adopted him and his war speech.

“Are you afraid of a civil war?” – He asked with his eyes sprouting mud –

“Nooooooooooo!” –The middle class shouted excitedly, with their Captain America flannels, with their stars and stripes flags, imagining that the civil war was going to be waged, far away, in those “Horrible slums,” where they live, the same people who make their beds, their meals and tend their gardens.

A war involves many horrendous things, friends. In addition to indiscriminate death, as detailed in Guaidó’s war contract with Trump’s mercenaries. War presupposes the total collapse of everyday life.

War imposes chaos, that’s what it’s about. The blockade is an act of war. But you wanted blocking didn’t you? You were not afraid of a civil war …

Since we avoided the civil war, the anti-Chavista leadership hired mercenaries to sow that war that they need so much but that does not materialize.

Shit! … The mercenaries failed. The gringo asphyxia managed by Guaidó and his puppies increases, to see if someone else might be encouraged to suddenly do something. Do you like gasoline? That’s what they do, but, we go in parts …

How about we leave them without TV? Yesterday Direct TV closed, forced by the gringo sanctions to violate Venezuelan law, and since that cannot be done, Direct TV left and the war entered through an empty screen into millions of houses in the East and West as well.

In quarantine and without TV is all an incitement to chaos, but the chaos did not come out of social networks, where those affected were venting, each in his own way, although the most painful complaints were from the disoriented opposition, who did not understand why the sanctions were affecting them instead of Nicolás, Diosdado, Padrino or Delcy … if they are not even chavistas!

So it would be that Isnardo Bravo, the one who tweeted a year ago the ultimatum of “24 to 72, the ones who understood, understood”, now downloaded his wrath because he wanted to see “My Great Gypsy Wedding” on Direct TV.

Such was the slap of reality in the opposition that the media operators, the info-mercenaries who did not forget, as Isnardo forgot, their role in this war, made impossible pirouettes to endorse you-know-who is the one responsible for the gringo sanctions that Guaidó manages and whose lives they affect.

Thus, very clever, Victor Amaya launched a dragged tweet that even left a trickle of slime: “It is clear that when responsibilities are evaluated if Conatel* had allowed Directv to operate by excluding Globovisión and Pdvsa TV from its channel grid, the only two sanctioned, we would not be seeing the cessation of all its operations and service in the country.”

In other words, for “Mrs. El Cafetal”** “it is not Guaidó’s fault. For her, the culprit, is as always the Chavista government who refuse to obey the gringos and their sanctions that say Globovisión is off the air.” Hold on, Vladimir!

And since no one went out to set the street on fire as expected, the info-mercenaries despaired and the dissimulation was over. Thus, after a late afternoon coup without a coup, Emmanuel Rincón, one who does not live here, as a long-distance job of a tweeter ordered: “Only with Maduro signing his resignation, the sanctions will be lifted, why don’t the people demand that?” .

“Demand, overthrow, do something”, always in the third person, always cowards, always treating their followers like imbeciles.

Damn the negationist mantra of all these years. I sanction them.
*Conatel: National Commission of Telecommunications established by Hugo Chávez 19 years ago.

** El Cafetal: an exclusive upper middle class residential area near Las Mercedes, Caracas known for its upscale shopping centers. Las Mercedes: “Las Mercedes is the largest district for shopping and leisure in Latin America. It is located at the Baruta Municipality, Miranda, Caracas. It contains discos and pubs. It contains clothing and fashion stores, art galleries, and restaurants, that include diverse gastronomical specialties from local food such as areperas to foreign and international food.” – Wikipedia