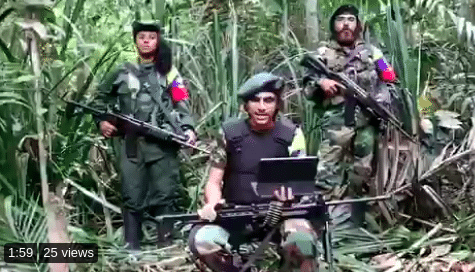 Through a communiqué released this Wednesday, March 24, the Venezuelan Government categorically rejected the pronouncements of its Colombian counterpart regarding the recent and unfortunate events that occurred on the border with that country, in Apure state. The Colombian government expressed its alleged concern over the actions undertaken by the Bolivarian National Armed Forces (FANB), which, in the exercise of defending its national sovereignty, lost two officers in combat with paramilitary and criminal Colombian forces.

“The abandonment of the borders by the Colombian State is a proven fact, granting a more than tacit consent to the actions of various criminal groups that operate in the area,” said the statement from the Venezuelan Government.

Later, it denounced that “the government of Iván Duque, with the support of the US Southern Command and its recently created elite group of seven thousand troops, has installed a corridor of illegal activities such as human trafficking, illegal mineral exploitation, and drug trafficking, destined to finance these armed groups against Venezuela.”

It clarified that the operations of the FANB have been developed in rural areas against “illegal camps of Colombian armed groups” financed to settle in the area, and that they [FANB operations] have the support of the Venezuelan people, who repudiate the violence “derived from more than seventy years of the Colombian war.”

The statement denounced that, facing the actions of the FANB, “upon being defeated, these armed groups have used the population as a human shield to flee to Colombia, where they are not persecuted, since they have the tolerance and protection of the authorities of that country.”

The communiqué closed by guaranteeing that Venezuelan state security forces will continue to “effectively seek peace within its territory,” while ensuring that any attempt to violate its territory will be duly punished.

Magdalena Medio FARC fronts distance themselves from the clashes in Apure state
In a video made public this Wednesday, March 24, an unidentified Colombian guerrilla leader read a statement distancing the organization from the incidents of recent days in Apure state, near Venezuela’s border with Colombia.

“We categorically reject these incidents… For the FARC-EP guerrilla fighters, the fact of being Bolivarian does not give us the right to assume the role of the military forces of the neighboring country (Venezuela)… Our fight is not in Venezuela and we consider that the problems in Colombia have not been solved, to allow ourselves to think of a war with a country that, besides all adversities, has the Bolivarian Revolution still standing,” is part of the statement.

“With sincerity and radically, we say that those revolutionaries that do not defend their country (Colombia) but get in trouble in other nations cannot be called heirs of the Marquetalia legacy,” concluded the guerilla leader. “We share our solidarity with the victims of this confrontation, which seems to us to be a plan designed by the oligarchy to discredit the Bolivarian Revolution.”

The statement, besides not clearly identifying the spokesperson (common practice for FARC-EP) but instead clearly identifying them as belonging to the FARC-EP Magdalena Medio Block and the fronts 4, 24, 33 and 37, seems to be aligned with the declarations of the Venezuelan government. On the other hand, it appeared to acknowledge the participation of at least some dissident FARC groups.

Featured image: Screenshot from the FARC-EP’s alleged statement, in which they distance themselves from the recent violence in Apure state, Venezuela, arising from clashes between the Venezuelan Army and paramilitary and criminal groups from Colombia.