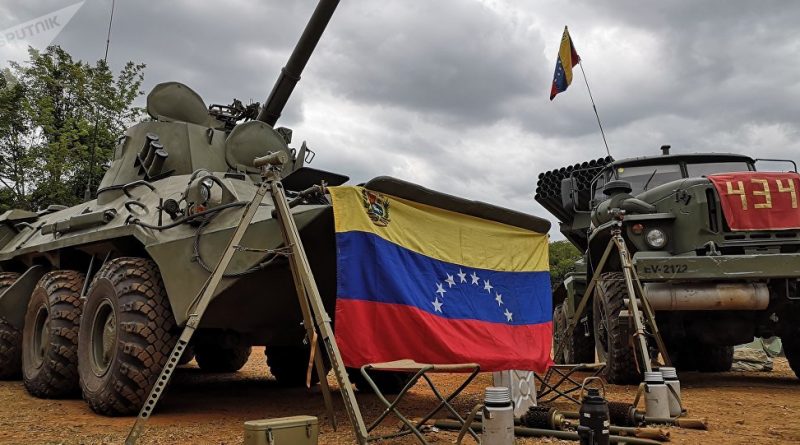 After the OAS approved the activation of the Reciprocal Assistance Treaty between American countries, Venezuelan constituent Julio Chavez alerted Sputnik that Venezuela could suffer an attack that serves as a “trigger” for an eventual intervention.

The resolution of the Organization of American States (OAS) to activate the Inter-American Treaty of Reciprocal Assistance (TIAR) is “the ratification of the traitorous behavior of the Venezuelan opposition leadership”, in the words of the Venezuelan constituent Julio Chávez.

The parliamentarian pointed out that the TIAR, signed in 1947 to commit the countries of America to assist each other in the case of extra-regional threats, “is a mechanism that fits perfectly into the Monroe doctrine, which was fundamentally established to guarantee the military hegemony of States United in Latin America and the Caribbean.”
Chávez questioned the legitimacy of the TIAR, recalling that the times it was applied (in 1962 in Cuba and in 1969 during the ‘Soccer War’ between Honduras and El Salvador) had the overlapping objectives “to validate invasions, aggression, massacres and overthrows of democratic governments on the continent.”

Along the same lines, the constituent recalled what happened in 1982, when the US did not support Argentina during the conflict with the United Kingdom over the Falkland (Malvinas) Islands.

The OAS resolution, which constitutes the TIAR Consultation Body and calls a meeting of foreign ministers for the second half of September, was approved with the vote of 12 of the 18 States parties to the TIAR. Trinidad and Tobago, Uruguay, Costa Rica, Panama and Peru abstained , while Bahamas did not participate in the vote.

Venezuela left TIAR in 2013, when the then President Hugo Chavez claimed that the treaty could be used as a justification for an intervention in its territory. However, the OAS once again considered that the Caribbean country is covered by the treaty after the National Assembly, in contempt since 2016, approved a resolution to reintegrate Venezuela into the treaty a few months ago (May 2019).

“It is a subregional mechanism that has lost a lot of legitimacy over time. It has lost credibility among peoples, countries and governments and some are already ruling against this violation of international law by the OAS, which only answer to those who pay, in this case, American imperialism,” Chavez said.

The Venezuelan constituent also said that the impulse to the TIAR comes a few hours after the resignation of US Defense Advisor John Bolton, one of the main drivers of US actions against the Government of Nicolás Maduro. For the parliamentarian, the expulsion of Bolton is a symptom that the actions against the Government of Maduro “have been crashing again and again” and “have implemented any amount of military doctrines and have not been successful.”

What can Venezuela expect after the activation of the TIAR?
Despite the loss of legitimacy of the TIAR, Chavez considered that its reactivation can bring military consequences against Venezuela. In that sense, he said that interests contrary to Maduro “will use the Colombian territory” as a launching platform for attacks on Venezuela.

Chávez mentioned, in that context, the installation in Cúcuta (a Colombian city on the border with Venezuela) of the private military company Dyncorp, which “is already hiring and capturing Venezuelan ex-soldiers.” According to the constituent, the company is training some 1,200 soldiers to “try to venture into Venezuela, generate ‘false positives’ (term used in Colombia for the killings of innocents posed as guerrillas ) and blame Venezuela for protecting the Colombian guerrillas.”

The constituent also said that these incursions could occur as “aerial attacks with remote control bombs” towards Venezuelan territory, by these groups. These attacks added to the accusation against Venezuela of protecting Colombian guerrillas would be, according to Chavez, “the trigger” for the TIAR to be activated.

“Of course, this aggression is going to be answered with all forcefulness by our Army, which is already committed and deployed along the 2,120 kilometers of border we have with Colombia,” said the constituent.