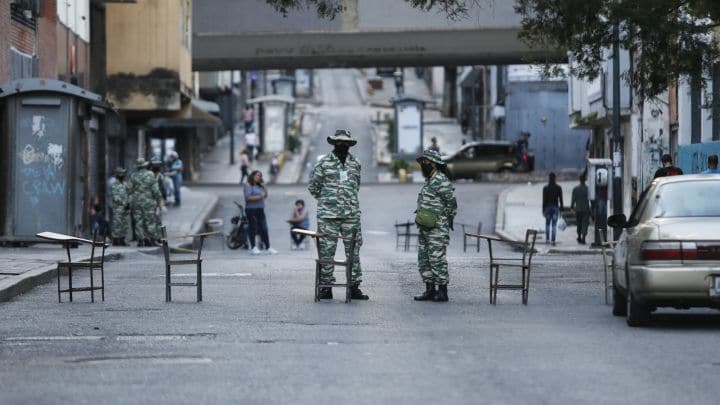 A ground-breaking agreement between the government and Guaidó-led opposition will allegedly allow the purchase of 12 million additional doses.

Mérida, March 22, 2021 (venezuelanalysis.com) – Venezuela has re-imposed a national lockdown to control a “second wave” of the Covid-19 pandemic.

The lockdown will last for at least a fortnight and will include Easter Week, a popular vacation period in the country. The measure limits commerce to priority businesses and restricts inter-municipal movement and public transport. It marks a break with the week-on-week-off lockdown modelwhich has been in place since June 2020.

Announcing the measure Sunday, President Nicolás Maduro underlined the spread of the highly infectious Brazilian coronavirus variant, which arrivedin Venezuela on March 3 and has now been detected in nine of its 24 states. The variant is estimated to have a 70% higher transmission rate and has contributed to a near doubling of daily infections in the Caribbean country over the past seven days. Authorities announced 817 new cases on Sunday, bringing the total to 151,000 with 1493 deaths, despite limited testing capacity.

“[The arrival of the Brazilian variant] has forced us to return to the starting point of 2020 [in order] to break the transmission chains,” the president informed on national television, reinforcing that “this is no joke.”

Alongside the national lockdown, authorities also announced that plans to reopen educational facilities in April would be suspended “until further notice.”

“Wherever schools and universities have been opened across the globe, [authorities] have had to close them again, including in our sister Cuba,” Maduro told the nation.

In a bid to combat the second wave, a reportedly ground-breaking deal between the government and the Washington-backed opposition sector has paved the way for the purchase of 12 million additional vaccines.

The Pan-American Health Organization (PAHO) and UNICEF-brokered agreement, which was announced by self-declared “interim president” Juan Guaidó last week, looks to liberate US $30.3 million in Venezuelan funds frozen by the US government in order to acquire vaccines through the United Nations COVAX program.

As part of its terms, Guaidó, who is still recognized by Washington as Venezuela’s leader, will request a special license from the US Treasury Department’s Office of Foreign Assets Control (OFAC) which oversees Washington’s sanctions regime. The deal was endorsed by the US’ envoy to Venezuela, James Story, who “congratulated both Maduro and Guaidó” last week from his base in Colombia. For its part, the Venezuelan government has yet to comment on the reported agreement, which has been confirmed by PAHO representatives.

Guaidó has been accused of blocking efforts against the pandemic in recent months, with his team fighting a UN-brokered deal to free up Venezuelan funds held in the UK for healthcare purchases since May 2020. He reportedly also turned down government overtures to order the release of frozen foreign assets placed under his control for vaccine purchases last January, drawing strong criticism.

US-led sanctions against Venezuela have hampered its ability to fight the pandemic by cutting off access to international trade, credit lines and payment channels, as well as freezing billions of dollars of foreign-based assets and penalizing shipping firms working with the country.

The unilateral coercive measures have been condemned by a chorus of international spokespersons, including UN Secretary General Antonio Guterres, UN High Commissioner for Human Rights Michelle Bachelet, EU Foreign Policy Chief Josep Borrell and the Pope. They were recentlydescribed as “illegal” and “devastating” by an independent UN report.

Despite the blockade, Venezuela has received 200,000 out of 10 million doses of Russia’s Sputnik V vaccine purchased earlier this year, as well as 500,000 Sinopharm doses donated by China. The remaining Sputnik V vaccines are scheduled to arrive during the course of the year.

The Maduro government has additionally announced plans to host 60,000 phase III clinical trials for Cuba’s Soberana 02 and Adbala vaccines in April. However, bids to use the UK’s AstraZeneca vaccine have been recently derailed, with authorities rejecting license applications due to “[health] complications for those who have received it.” It is unclear how the move will impact the estimated 1.4 million AstraZeneca vaccines the country was due to be assigned through the UN COVAX program.

The challenges in accessing further vaccines saw the FEDECAMARAS Chamber of Business and Commerce announce plans to request government authorization to “participate in the access and logistics of the vaccination process (…) hand in hand with the public sector” on Monday. However, the private sector guild, whose repeated meetings with the government have been hailed by Maduro, dismissed rumors that it would import and commercialize up to five million Sputnik V vaccines, vowing to allegedly look to secure vaccine supplies only for its affiliated workplaces.

A national vaccination program began in February, with healthcare and educational workers prioritized alongside National Assembly deputies and police personnel. Data concerning the progress of the program has not been released, however, prompting anti-government sectors to claim a lack of transparency and favoritism in the assignment of the vaccines. Authorities have pledged to vaccinate 70% of Venezuela’s estimated 25 million population by the end of the year.

Featured image: Venezuela has returned to a national lockdown to prevent increasing infection of the Covid-19 virus. (AS)