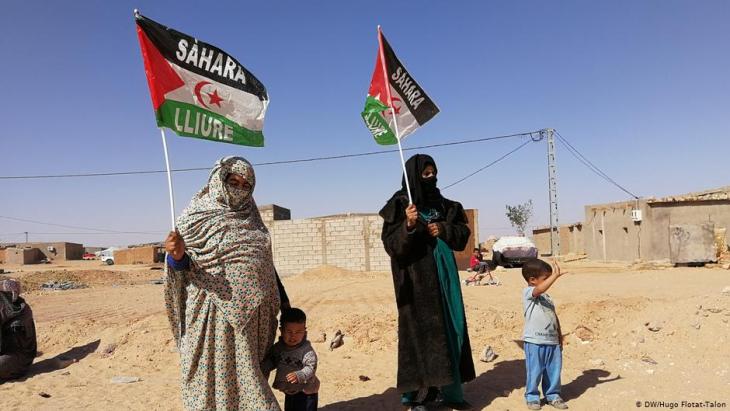 I consider myself to be politically educated to some degree or other on the machinations of imperialism as it presents itself throughout the world.

The colonisation of Palestine and Kashmir. The sanctions on Venezuela, Iran, Russia, China, North Korea. The military adventurism of the west in Iraq, Afghanistan, Libya, Syria and Yemen on behalf of the world banking system, the military-industrial complex, oil and gas exploitation companies, together with the ever-growing civilian protection racket of armed guards, mercenaries and security consultants, fleecing the occupied countries of their wealth and independence all spring to mind.

It should come as no surprise that another struggle for national independence is taking place below the press radar, in a far-flung corner of the old world order and within shot, no pun intended, of the European Union.

How many of us have heard of Western Sahara, as it goes uncovered by mainstream media propagandists?

The history of Africa is one of persecution, occupation, exploitation and genocide by Europe, for the last several hundred years.

The whole of the continent was under foreign colonial military occupation and exploitation.

From slavery to rubber plantations, Africans were exploited, brutalised, murdered, enslaved and exterminated.

It is difficult to think of a more inhuman and brutal regime in Africa that existed under European colonial rule than that of the Congo, under Leopold 11, of Belgium, which presided over the genocidal deaths of 10 million people in the Congo Free State.

RELATED CONTENT: African Solidarity Conference Calls on UN and AU to Speed Up the Total Liberation of Western Sahara

Africa was occupied by many European countries in a race that began in the 1800s to grab as much land and resources as was possible by the conquering armies of France, the United Kingdom, Germany, Portugal and Italy.

Congo and the Sahara Desert were not recognised as states, but that did not prevent them being occupied by Belgium and Spain.

The Berlin Conference of 1884-1885 established the rules by which European countries could set up colonies and protectorates throughout Africa.

All the present-day violence, instability and continued exploitation of Africa can be traced back to this conference and the legitimacy it gave colonial imperialist European countries, to rape Africa.

The ravaging of Africa continued for many decades. Always challenged by the indigenous peoples and always resisted. The power of the gun, not diplomacy ruled Africa. The Europeans had the guns and the Africans had the resources. It was an uneven and unfair fight.

Many wars of national liberation then erupted across the continent from 1914 until 1975.

Some countries gained their freedom, others had puppet regimes installed and the exploitation continued.

RELATED CONTENT: US Begins Process of Opening a Consulate in Western Sahara

From the millions who died in Algeria fighting the French occupation, which France has never apologised for, to Black South Africans, gaining power from the White minority, the fight for independence, equality, self-determination and justice continues today.

Modern Africa is a culmination of European machinations, as countries bordered by different languages, ethnicity and religious composition were amalgamated.

Like the Middle East, they simply drew new borders, forced different tribes, religions and ethnicities into one country, creating many of the present-day divisions which the west still manipulates and exploits for its own economic and political advantage.

Morocco, Mauritania and the people of Western Sahara all claimed sovereignty at one point over the disputed area.

On December 26, 1884, Spain declared parts of Africa to include Western Sahara, a Spanish protectorate.

It ruled over the area until just before the death of General Franco, the Spanish fascist, on 20 November 1975.

As the continued fight for liberation across the continent escalated, many of the European powers came under pressure from the indigenous people they ruled and the United Nations to decolonise.

Morocco had achieved independence from Spain in 1956 and claimed sovereignty over the Western Sahara.

In 1973 an organisation entitled the Polisario Front was established to lay claim to the sovereignty of Western Sahara on behalf of the indigenous Sahrawi peoples.

Mauritania withdrew both its forces and claims to Western Sahara after a conflict with the Polisario Front.

Between 1975 and 1991 conflict continued between the Polisario Front and the Moroccan occupation forces.

Thousands died and tens of thousands of ethnic Sahwari civilians were forced to leave between 1975-1976 and now live in refugee camps in neighbouring Algeria.

Morocco has colonised the land it occupied and the situation faced by the Sahwari people who declared an independent State on 27 February 1976 SADR, Sahrawi Arab Democratic Republic is harrowing, retaining only 20% of the original land.

Hostilities between the Polisario Front and the Moroccan occupation ended in 1991 as peace moves were initiated to try and end the conflict.

The United Nations, at one point prior to Spain’s leaving Western Sahara, appeared to favour Morocco as the legitimate ruler of Western Sahara but has subsequently called for a referendum by the people, to decide their future.

The Sahrawi Arab Democratic Republic is recognised by over 80 countries.

The Polisario Front has reignited its campaign of national liberation and it demands that SADR be recognised and its people given the right to self-determination. Militant resistance against the Moroccan occupation restarted in 2020 and clashes continue in 2021.

While Morocco continues to move its civilian population into Western Sahara and occupy the country the parallels with Palestine under Zionist occupation, Kashmir and Sri Lanka under Indian occupation, and the west’s continued military occupation of Iraq, Afghanistan, Libya etc. prove that peace, justice and liberation are as far away today as ever for the peoples living under brutal military occupation and repression.