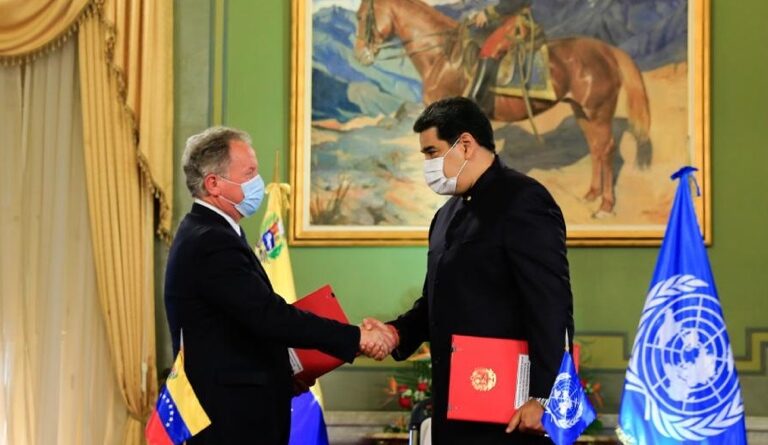 On Monday, April 19, the Venezuelan government signed an agreement with the United Nations World Food Program (WFP) to ensure school meals for children under the Food Assistance Programs for Early Childhood Education. The agreement was signed by the President of the Republic, Nicolás Maduro, and the Executive Director of WFP, David Beasley, at Miraflores Palace.

Beasley is in Venezuela on a one-week official visit, during which he will attend meetings with officials of the national government. He arrived on Sunday, and was received by the Venezuelan Minister for Foreign Affairs, Jorge Arreaza.

Who is David Beasley?
David Beasley is the executive director of the World Food Program (WFP) of the United Nations. This UN body operates worldwide to ensure supply and distribution of food to people in regions suffering from food shortages or crises arising from diverse reasons including war and natural disasters. WFP works to strengthen cooperation, coordination, and communication among governments, companies involved in food trade, NGOs and other social organizations.

The UN official was born in Darlington in the state of South Carolina, USA. He was a member of the US Republican Party, and served as governor of his native state, and was also a member of US Congress for South Carolina. He has been at his post at the UN since 2017.

“Beasley has worked with everyone irrespective of all political, religious, and ethnic differences,” states the WFP official website. “He has worked for the cause of economic development, humanitarian aid, education, and intercultural cooperation for the most vulnerable peoples in the world. Over the last 10 years, he has collaborated with influential leaders and directors of programs in these fields in more than 100 countries.”

Joint programs
On Sunday, President Maduro reported that he would meet Beasley to discuss the agenda of cooperation that Venezuela already has with WFP, and to fine tune details of joint programs, which he called high-level agreements.

The president greeted the representative of the multilateral organization with these words: “Welcome, David. Venezuela receives you with affection, with care.”

“We will sign important agreements for international collaboration and actions to guarantee food security for all Venezuelans,” he added.

President Maduro highlighted that the World Food Program had won the Nobel Peace Prize in 2020 in recognition of its work for the betterment of mankind. He expressed his conviction that the national government would be able to reach new agreements with this international body, with which the country has been working on multiple programs for a long time.

He also stated that he will discuss with the WFP executive director the initiatives that the government has adopted to attend to the requirements of the people, such as meals for school students, distribution of animal protein and other food items to children and families in general. “In our conversations I will explain to him the food programs [of Venezuela], like the CLAP program that attends to the needs of almost seven million families,” said the president.

Monday’s agreement
The agreement signed on Monday is the first in a series of projects adopted to guarantee food security for the people of Venezuela.

After the signing of the agreement, the UN representative said in his speech that “our commitment is to respond to the needs of the children of Venezuela. We will not allow our work to be politicized; we must work together for the children and the people of Venezuela.”

“We have a lot of work ahead of us,” continued Beasley, “especially now that COVID-19 has caused havoc in the world. In these times, the UN will work as a brother and friend to help those most in need. It is an honor to be here, and I look forward to working together to meet the needs of the children and the Venezuelan people.”

For his part, President Maduro thanked Executive Director Beasley and his team for their visit and their efforts to ensure the availability of food for all Venezuelans. He also highlighted the contributions of Jorge Rodríguez, president of the National Assembly, who supervised all stages leading up to the signing of the treaty on Monday.

“The first agreement between Venezuela and the WFP is focused on providing nutrition to our children at their earliest age, the most important stage for their integral development,” wrote Foreign Affairs Minister Arreaza on his Twitter account. “We thank the WFP team and, as President Nicolás Maduro said, we hope to walk many more steps together.”

The WFP team, headed by Executive Director Beasley, will continue its visit throughout the week.