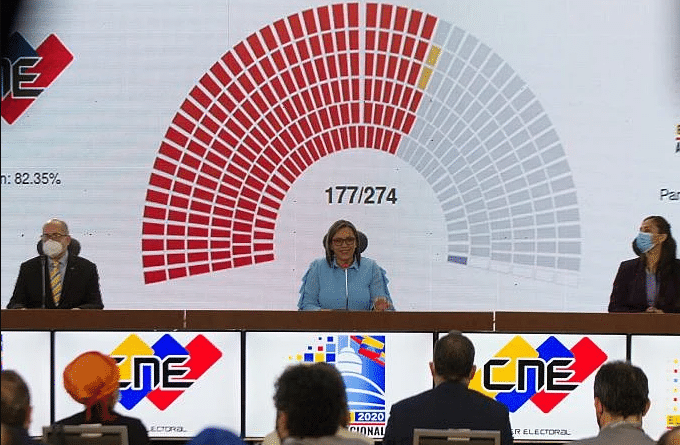 December 7, 2020.-  The revolutionary and progressive forces that have come together in the Gran Polo Patriótico (Great Patriotic Pole – GPP) obtained a majority of the seats in the new National Assembly in the parliamentary elections held this past Sunday as confirmed by the president of the National Electoral Council, Indira Alfonzo.

From the Strategic Operations Center of the National Electoral Council in Caracas, and with the presence of the directors of the Election Commission and thousands of national and international observers, Alfonzo, the head of the Council, gave an overview of the election results with 82.35% of the ballot being received and counted.

She specified that this first count of certified results gave to the revolutionary forces a 67.6% with 3,558,320 votes.  At the same time, she noted that the total votes were 5,264,104.  The first results, tabulated in terms of electoral alliances are:

RELATED CONTENT: Chavismo Wins a Majority in the National Assembly. What’s next?

Thus, the head representative of the Election Commission authorized the Regional Election Boards to total, assign, and announce the positions of the results and regional constituencies that are declarable.

In these elections established by the Constitution, the Election Commission set up 14,221 polling places with 29,622 polling booths with voting machines installed.

Some 90% of the 107 organizations with legal political goals in the country nominated candidates, so that the Venezuelan people had to choose among more than 14,000 candidates who ran for seats in Parliament.

In reference to the positions elected individually by name in the 87 constituencies:

81 of them have results which are final and irreversible. Of 24 positions elected by regional slates of candidates, 9 have results that are final without the possibility of change in the final result.

It is worth noting that the president of the Electoral Council praised the spirit of civility with which the Venezuelan people went to the polls this past Sunday to elect those who will head up the new Parliament.