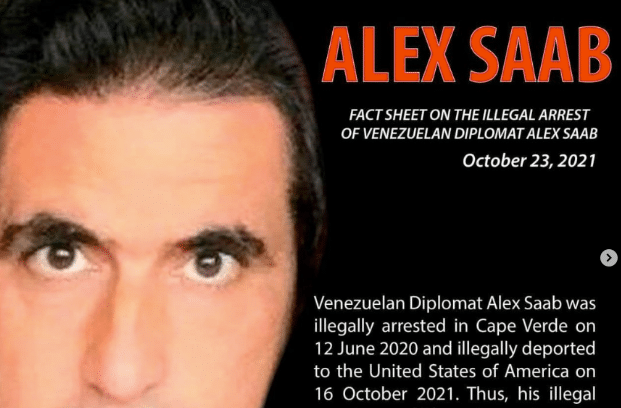 Bridgetown, October 28, 2021—After the illegal arrest of Venezuelan Diplomat Alex Saab in Cape Verde in June 2020, and particularly after his illegal deportation to the US a fortnight ago, a great number of important articles and interviews have been published online to raise awareness of the serious violations against Saab, Venezuela and the International Law.

In this regard, the Embassy of Venezuela in Barbados took upon itself the task of bringing all these articles and interviews together, along with primary sources, such as the Vienna Convention on Diplomatic Relations and the report by the UN Rapporteur on the Negative Impact of Unilateral Coercive Measures, to create a Fact-Sheet on Alex Saab.

“We noticed that a number of well-intentioned people, unfamiliar with the case of Alex Saab and generally with Venezuela, needed a shorter and more straightforward briefing,” said Álvaro Sánchez Cordero, the Venezuelan Charge D’Affaires in Barbados. “We therefore decided to standardize the information in a Fact-Sheet format that would go straight into the illegalities and the reasons behind the destabilization of Venezuela by the US Government.” He added that “it is unbelievable that the governments of both Cape Verde and the US breached so many laws and rulings, and violated the Human Rights of Alex Saab, in order to send a warning to anyone who would dare to help Venezuela bypass the blockade.”

The Fact-Sheet is divided into seven sections. First, “Who is Alex Saab and what was he doing in Cape Verde?” Then: “What is the reason behind his arrest and extradition?” Followed by all the illegalities, breaches of law, human rights violations and international pronouncements in Saab’s favor.

At the end of the Fact-Sheet there is a section called “US history in rendition flights,” which quotes an article from The Washington Post that explains how the US government has engaged in the past in similar illegal detentions across the world.

The Fact-Sheet on Alex Saab can be found on the social media accounts of the Venezuelan Embassy to Barbados and on the website of Orinoco Tribune.

Featured image: Alex Saab’s face in the front page of a fact-sheet prepared by the Venezuelan Embassy in Barbados. Photo: Instagram / embavebarbados

Special by the Embassy of Venezuela in Barbados.