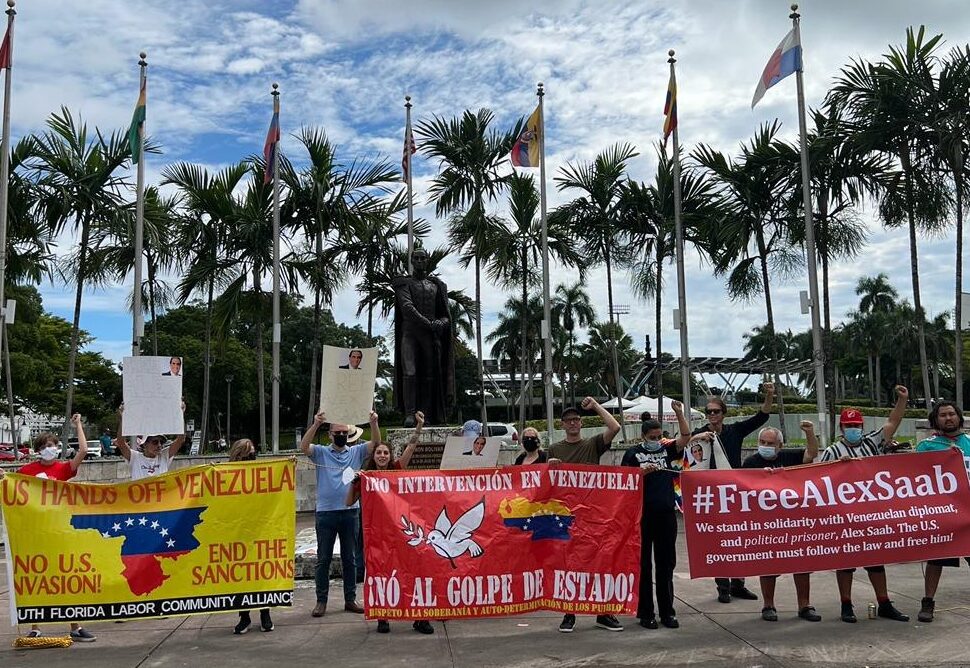 On Sunday, October 24, social movements from different countries, including the United States, peacefully demonstrated in favor of the release of Venezuelan diplomat Alex Saab. He was illegally extracted from Cape Verde to the US, as part of the interventionist and violent policies of the US authorities against the peoples of the world, and especially the criminal strategy of starving millions of Venezuelans with the sole objective of ousting democratically elected President Nicolás Maduro.

Groups of activists in defense of human rights expressed condemnation for the arbitrary and irregular measures by the governments of Cape Verde and the United States in front of the Torch of Friendship, in Bayside Biscayne, Miami, where the members of the Bolivarian Circle “Negra Hipólita” who live in that city also attended. Another protest was held in New York on the same day.

Through these peaceful demonstrations, activists and citizens of the United States request the cessation of all illegal actions that have been undertaken since June 12, 2020 against the Venezuelan ambassador. The illegal actions include violating Saab’s diplomatic immunity formally recognized by Russia and Iran before his kidnapping in Cape Verde. These actions have been denounced since the first day by the Venezuelan government as a violation of the most basic rules of international law and the Vienna Convention.

Since last year, social movements in Texas, Boston, Chicago, and New York have developed campaigns against the illegal detention of diplomat Alex Saab. The campaigns disseminate the truth about the hidden interests of Cape Verde regarding Saab’s recent extraction on October 16, and they are against the prejudiced justice system of the United States controlled by the White House, without any balance or separation of power among branches of the government.

The Alex Saab kidnapping has ignited indignation and outrage among progressive movements in the United States. Many analysts foresee that this latest criminal move by Biden’s administration will create an environment similar to the one created around the “Free the Cuban 5” movement, which was key for the release of the Cuban counter-terrorist heroes and the normalization of diplomatic relations between Cuba and the US during the last months of President Obama’s administration.

On Sunday, the Italian socialist and revolutionary organization Movimento 48 also expressed its solidarity with the Venezuelan diplomat and the government of Venezuela. They condemn the illegal transfer of the Venezuelan official to the United States with the complicity of Cape Verde’s corrupt government of Jorge Carlos Fonseca hours before presidential elections were held in the African nation.

RELATED CONTENT: Venezuela Thanks Cuba for its Solidarity in Confrontation with Injustices of Imperialism (#FreeAlexSaab)

Through its Twitter account, the Italian organization stated that the extraction of the Venezuelan diplomat is “a completely illegal action that does not respect any type of human right.”

“We express our greatest solidarity with Saab and the Venezuelan socialist government!” reiterated Movimento 48. The organization also denounced the interventionist and violent policy of the United States against the Venezuelan people, government, and officials, which has also sabotaged the Mexico Talks that was being held with Norway’s mediation.

The organization highlighted that “the United States continues its campaign of aggression against the Bolivarian Republic of Venezuela and its people. Alex Saab is an important Venezuelan diplomat and permanent member of the dialogue between the government and the opposition.” Movimento 48 fights for a new republic, a new socialist, democratic, and anti-imperialist Italy.