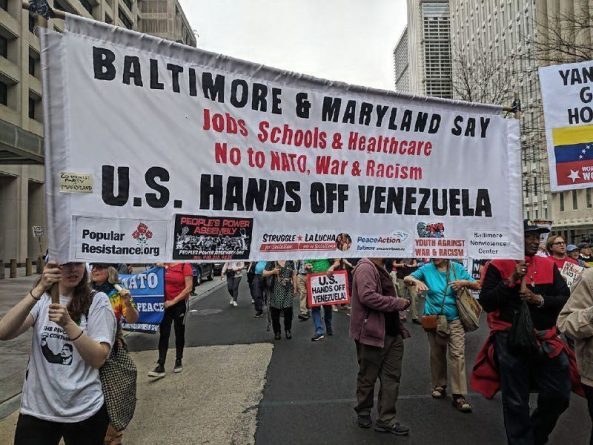 On a sunny and clear spring day, over 500 anti-war activists gathered at Lafayette Square in Washington, D.C., on March 30 to say “No to NATO!”

The North Atlantic Treaty Organization is a military alliance founded in the wake of World War II and dominated by the U.S. military. It was established to push back people’s movements and threaten socialist countries in Europe. Since the fall of the Soviet Union, it has extended its poisonous reach much further.

The United National Antiwar Coalition (UNAC) called the demonstration to protest NATO’s past and continued aggression against countries throughout the world. The protest was held just before the foreign ministers of NATO member countries gathered in Washington to mark the 70th anniversary of the alliance’s founding.

RELATED CONTENT: Venezuela, US Solidarity, and the Future of Socialism

Outrageously, the NATO powers held this “celebration” on April 4 — the 51st anniversary of the assassination of Dr. Martin Luther King Jr., a fierce critic of U.S. wars.

People from many organizations and multiple contingents were in attendance. A delegation from Baltimore represented Struggle for Socialism/La Lucha por Socialismo, Youth Against War & Racism and others. They demonstrated not only against NATO, but also against the danger of U.S. military intervention in Venezuela.

The demonstration this year held particular weight because of the increased aggressive measures that the U.S. and its allies have taken against the democratically elected government of President Nicolás Maduro. Colombia, a close U.S. ally, recently became the first Latin American member of NATO. Many fear that NATO could be used to launch a military campaign against the Bolivarian Republic of Venezuela.

RELATED CONTENT: Urgent Call to Celebrate May Day in Solidarity with Venezuela (Delegation)

This would not be the first time that NATO took such an action. In 1999, NATO led a bombing campaign against the legitimate government of Serbia. The military alliance took similar action against Libya in 2011, at the urging of then-President Barack Obama. Both of these campaigns only served to destroy the infrastructure and institutions of those countries. To this day, neither has fully recovered.

Because of this ominous history, anti-war activists gave passionate speeches all afternoon. The crowd chanted “Hands off Venezuela!” and “No to Nato now!” and then marched from Lafayette Park into the heart of downtown Washington.

The march specifically targeted the headquarters of institutions that have served to levy economic warfare and military attacks against the people of other countries, including the International Monetary Fund, the World Bank, the Organization of American States, and the Department of Customs and Border Enforcement. Venezuela, Cuba, Syria, the Democratic People’s Republic of Korea, Iran and Zimbabwe are just some of the countries that have been targeted.

This demonstration sent a clear message that the people will not tolerate continued violence against the rest of the world at the hands of the United States and its allies in NATO.