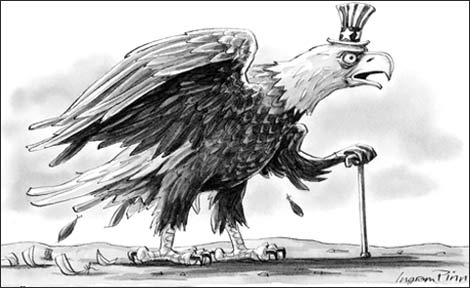 International Opinion
May 18, 2020May 18, 2020 orinocotribune Cuba, mercenaries, terrorism, US decline, US Imperialism, us military aggression, Venezuela

Less than two weeks after an abortive mercenary invasion aimed at overthrowing Venezuela’s government and murdering its president that was hatched by the Trump White House, the US State Department on Wednesday renewed it classification of the country as “not fully cooperating” with Washington’s global war on terrorism.

Also added to the list was Cuba, whose embassy in Washington was targeted by a gunman armed with an automatic weapon on April 30, an act that elicited not a word of condemnation from the Trump administration.

This marked the first time that Cuba has been placed on the list since 2015, when it was removed as part of negotiations between US President Barack Obama and Cuba’s Raul Castro on the normalization of relations between the two countries. That move was backed by major American financial and corporate interests seeking to compete with the Chinese and Europeans in and for the Cuban market.

Prior to that, Cuba had been classified for 33 years as a “state sponsor of terrorism.” The designation stemmed from Havana’s support for both Nicaragua, at the time under siege by the terrorist “contra” army organized by the CIA, and El Salvador’s Farabundo Martí National Liberation Front (FMLN), carrying out an armed revolt against the murderous US-backed juntas that ruled El Salvador. Both the Sandinistas and the FMLM have since transformed themselves into bourgeois parties, leading right-wing governments in their respective countries.

The hypocrisy of Washington branding Venezuela and Cuba as complicit in terrorism is as brazen as it is boundless.

On the same day that the State Department released its list, Venezuela’s delegation to the United Nations filed formal charges with the Security Council and the Secretary General over the armed terrorist attacks carried out on the country’s northern coast on May 3 and 4 by mercenaries organized, trained and financed by the governments of the US and Colombia.

The Venezuelan government reported capturing 39 more armed men on its border with Colombia Thursday, bringing the number detained since the landings in the coastal towns of Macuto and Chuao in the north of Venezuela to 91.

Among those detained are two ex-US special forces operatives, Luke Alexander Denman, 34, and Airan Berry, 41, who have been formally charged with terrorism, facing sentences of between 25 and 30 years in prison.

The two ex-US soldiers were recruited for the operation by a US security contractor, Silvercorp, Inc., run by a former Green Beret, Jordan Goudreau, who was put into contact with Washington’s puppet and self-proclaimed “interim president” Juan Guaidó by Trump’s longtime security chief.

RELATED CONTENT: Venezuela: When News Can’t be Manipulated it’s Hidden by Trump’s Mercenaries – Including the Media

A contract signed between the two of them, along with other members of Guaidó’s entourage, has been posted online, revealing that the US puppet had agreed to pay $212 million for an armed operation that, if successful, would have led to either the capture or murder of President Maduro, along with the killing of an unknown number of other Venezuelans, both civilian and military. Guaidó was named in the contract as the “commander in chief” of the mercenary operation.

While branding Caracas as “uncooperative” in the US war on terror, the Trump administration has shown no inclination to extradite Goudreau to face charges of terrorism in Venezuela. On the contrary, it has vowed to use “all tools” at its disposal to free the two US mercenaries caught red-handed on the beaches of Venezuela.

US terrorism against Venezuela did not begin with the landings on its northern coast earlier this month, but rather has been sustained through a “maximum pressure” regime of economic sanctions tantamount to a state of war, preventing the country from importing food and vital medical supplies in the midst of the coronavirus pandemic.

Washington’s claim that Caracas is “uncooperative” in the so-called US war on terrorism is based on the claim that Maduro and other members of the Venezuelan government are involved in “narco-terrorism.” The Pentagon has deployed warships off the Venezuelan coast on this pretext, even as US intelligence officials acknowledge that the vast majority of drugs coming into the United States are passing through the territories of Washington’s closest allies in Colombia and Central America.

In Cuba’s case, the cynicism of the US decree is equally blatant. Its principal charge is that Havana failed to accede to the demands of Colombia’s right-wing President Iván Duque to extradite representatives of the National Liberation Army (ELN) guerrilla group, who had come to the Cuban capital as part of a series of peace negotiations that resulted in a settlement between the main guerrilla group, the Revolutionary Armed Forces of Colombia (FARC) and the Colombian government.

For its part, Cuba has recorded the deaths of 3,478 of its citizens and the wounding of 2,099 as a result of terrorist operations launched from the US and with the aid and complicity of the US government.

Also included on the list of those not “cooperating fully” with Washington’s war on terror were Iran, Syria and North Korea.

Iran responded with a statement from Foreign Ministry spokesman Abbas Mousavi, who said, “With a history of founding, funding & arming different terrorist groups, a record of state terrorism, and its outright support for another terrorist regime [Israel], US is not a good yardstick for measuring anti-terrorism efforts.” In January of this year, Washington carried out an act of flagrant state terrorism with the drone missile assassination of one of Iran’s senior state officials, Gen. Qassem Suleimani, as he was making a state visit to Iraq for talks with the country’s prime minister.

As for Syria, the country has been the victim for nearly a decade of a US-organized war for regime change that has utilized Al Qaeda-linked militias as its main proxy ground troops.

US officials have told the media that Washington is preparing to return Cuba to its list of state sponsors of terrorism and to brand various elements of Venezuela’s security forces as terrorist entities. These measures would pave the way for redoubled US aggression against both countries.

While both the Maduro government in Venezuela and that headed by President Miguel Díaz-Canel in Cuba have sought to accommodate themselves to the interests of US and world imperialism, Washington has shown no inclination to compromise. The Trump administration, while currying favor with the right-wing Cuban and Venezuelan exile groups in Florida in advance of the 2020 election, is basing its policy on the drive by American imperialism to roll back the influence of Russia and China in the Western Hemisphere. The charges of failure to cooperate with the “war on terrorism” are being leveled to prepare for a global war that entails unimaginable terror for the population of the entire planet.