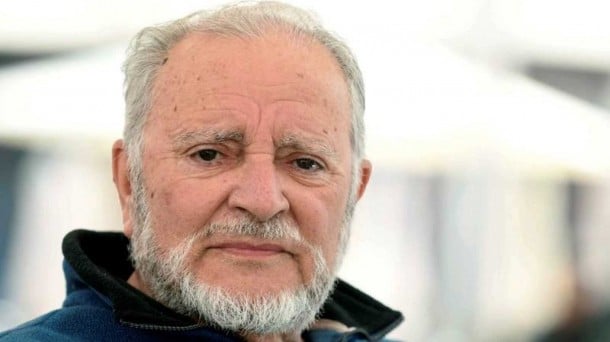 By Arantxa Tirado – May 16, 2020
Julio Anguita has departed and, with him, the indisputable leader of Spanish communism dies. The leading figure that inspired many to get involved in politics, join the Communist Party of Spain (PCE) and its variants in the different territories of the State, or in the United Left (IU). All the communists of the State, whether we have a card or not at present, we feel orphaned due to the emptiness that he leaves.
His circumspect presence, his charismatic seriousness and his distance from all poses and histrionics are irreplaceable. That elegance of who is an essential human being, aware of his historical and political role, of the moral responsibility associated with his leadership, of who does not want to be the center of the debate but a means for the social transformation of his own, but with them, a difficult space to fill in. Anguita achieved what few communist leaders have achieved, to be respected by both followers and political opponents. Perhaps because Anguita personified, like no one else, the indissolubility of ethics and politics. Something so rare in current politics, whether in the Spanish State or in the rest of the world. Julio Anguita showed us, with more deeds than words, that behind every political project, behind every program, there is a set of ideas that refer to how a society has to organize itself and how wealth must be distributed. And choosing to think individually or collectively connects with deep ethical values, so absent from the daily, public and private actions of many who even dare to call themselves anti-capitalist, left-wing or communist. Anguita was our mirror, the one that with his behavior showed us the cynicism of those who dissociate discourse and praxis. Living with anti-capitalism in the mouth, but with capitalism in the mind. The same cynicism of those who will praise him in his death, but despised or ridiculed him in life because, as he himself said, his example was uncomfortable for those who hide in the mantra of “all politicians are equal.”

ANGUITA ACHIEVED WHAT FEW COMMUNIST LEADERS HAVE ACHIEVED, TO BE RESPECTED BY BOTH FOLLOWERS AND POLITICAL OPPONENTS

And, no, Anguita was not the same as all politicians. His thought, communist, christian, republican, anarchist and, above all, free and not for sale, was a forerunner and broke the mold. In times when we detect a conservative communism that looks more at the essences of the past perhaps for fear of the present and the future, it is good to remember that Anguita always saw beyond, while remaining a “classic”, as he defined himself to distinguish himself from the “renovating” opportunists who, under a discourse of modernization of ideas, hid the will to thrive in the institutions of the system. The thought of Anguita, which some dismissed as “quixotic”, showed before anyone else the dangers of capitalist Europe. He denounced the hypocrisy of the Spanish Socialist Workers Party (PSOE), which the majority of the working class continued to vote for, even the one who admired Anguita and agreed with him, under the pretext of a “useful vote”. Anguita was right, yes, but inertia, fear or mediocrity, who knows to what extent and combination, made him a leader more valued than voted. Despite having managed to take Izquierda Unida (IU) to its historic electoral highs in 1996, two seats less than the 23 that Partido Comunista Espanol (PCE) got in 1979, Spanish society was stingy with a leader who offered honesty in times of corruption. A leader who knew how to warn without falling into condescension and who also held the people responsible for their decisions, because Julio spoke clearly, without half measures. A way very far from that left that today does not dare to criticize the lumpen sectors of the working class or claims to have popular tastes to cover their guilt complex for not coming from below. Those who want to sell us that the best thing to do to be on the left is to demonstrate that you look like what the people are supposed to be without questioning whether that people is alienated by the capitalist system, not to say without understanding that the role of a political leadership is not simply reflect the supposed will or tastes of the masses but serve for their emancipation. The difference between the marketing policy that Julio detested and politics as a collective human project for his own liberation, as he understood it.

As it could not be otherwise, in the case of a communist leader, there were times when he had opposition within the party, and not only from the most reformist sectors. Criticism is an integral part of the communist tradition, although some prefer to draw caricatures of dogmatism, monolithic thought, and alleged uncriticalism of communist culture. Nothing is further from reality, another thing is that it has not always been resolved in the best way. In any case, the existence of inquisitors of the communist faith that tarnish collective projects with their personal projects will never be able to overshadow the great principles and ideas that move revolutionaries. Those shared values that guide the red thread of the class struggle, common to all of us who identify with the struggles of our comrades at any time in history and anywhere in the world. Those remote or contemporary examples, sometimes contradictory, yes, but they are legacies that mark the way beyond all sectarianism.

RELATED CONTENT: Proletarians of the World, the Pandemic is Inequality
It is not for me to gloss over the personal and most intimate figure of Julio Anguita because I never dealt with him in person. We were close but his character and my prudence were conjugated so that we did not get to cross words, although yes, glances and his, I must say, was especially withering. I just want to tell a little anecdote from the last time our physical presences intersected in space-time. It was in Vallecas, in September 2018, at the “Fiestas del PCE”. I was with my friend Homera Rosetti, author of Panrico, the longest strike. We had gone to the party together from Barcelona. She to present her book, me to talk about the working class. That afternoon we entered without doubts the tent where Anguita presented a book with other colleagues. Julio was speaking before an auditorium full to overflowing, the heat was suffocating and we all left the venue a little overwhelmed, I daresay Anguita too. Homera and I met Juan Andrade, the author of Atraco a la memoria the long and documented interview with Julio Anguita published in book form, and Tomás Rodríguez Torrellas, Akal editor, also a friend of Julio’s. Tomás knew of my desire to greet Anguita (my friend had already been lucky enough to meet him and share dinners with him) and I wanted him to introduce me. I especially wanted to thank him for choosing the book that Nega and I published in Akal, The Working Class Doesn’t Go to Paradise, for a debate that had been organized in June 2017 with kids from institutes throughout Spain. Yes, Julio Anguita, the indisputable leader of Spanish communism, the moral referent of the transforming left, took time in retirement to go to debates with kids. In this case, at a Cordovan institute, the IES Maimonides, at the proposal of Professor Rafael Robles who organized a debate on “Globalization and Human Rights” . A debate in which each of the parties proposed a book to selected students from various colleges throughout Spain. Julio, to our surprise and pride, chose Nega’s book and mine. His opponent, Santiago Navajas, one of Xavier Sala i Martín Liberal economy. Night and day. It was June 2, 2017 and Julio Anguita gave a master class to all those teenagers. I followed him from my home in Mexico City, amazed that this referent, whom I did not know personally beyond having seen him from afar at a PCE party or book presentation, would have read our work and considered it worthy of recommendation. Well, that afternoon in September 2018 in Vallecas, neither Tomás nor Juan, despite the trust in him, much less Homera or me, finally dared to approach Julio after his talk. Such was the number of people who pounced on him, saying things to him, shaking him, while for us his face of suffocation and his half-concealed rictus was evident before some comrade who treated him as if he were any other Messi, that we opted for a languid “Hello” and little else. I was never able to thank him in person for this detail that for someone who considers himself a grassroots activist, like me, was one of the highest recognitions that can be received. So many things are pending with his death and not just small personal dreams like presenting with him and Nega The working class does not go to paradise in Córdoba, but above all collective yearnings …

Unfortunately, the death of Julio Anguita joins that of other party historical figures who have also left us these days: Albert Escofet or Susana López. Whims of fate, Julio was one of the people who called the Escofet family to offer their condolences just a few weeks ago. This year 2020 is taking some of the best and Julio stood out among them, without a doubt. But it is also taking an entire generation by a pandemic that can only be fought if humanity begins to understand that the collective interest must take precedence over the individual interest and that no one can save himself. Neither in a pandemic nor in capitalism. For that, we must transform reality, retake the open and proud defense of communism as a horizon to build, to follow the legacy that Julio, Albert and so many anonymous communists, tireless and selfless activists, have left us an example. Hopefully our generation will rise to the occasion and be able to fulfill some of the dreams shared by the earth’s outcasts since time immemorial. We owe it to them, we owe it to ourselves and to humanity as a whole. Thank you, Julio, for showing us the way with the consequence of your life and work.